It’s a very welcome return to Linda’s Book Bag for Alli Sinclair as she celebrates her latest novel Burning Fields which is published today. Alli is taking a look at themes that still resonate 70 years after the setting of her book. I also have my review of Burning Fields and would like to thank Alli for sending me a copy in return for an honest review.

Alli was last here on the blog with a fabulous post about location when Under the Spanish Stars was published that you can read here. 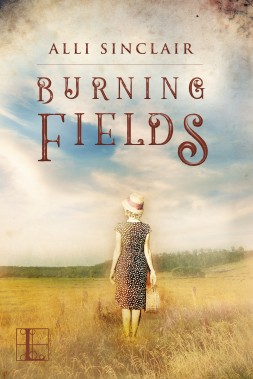 A powerful and sweeping historical novel of love, loss, and hope, set against Australia’s vast sugarcane fields in the turbulent days after World War II.

1948: Change has come to every corner of the globe—and Rosie Stanton, returning home to northern Queensland after serving the war effort in Brisbane, plans to rescue her family’s foundering sugarcane farm with her unstoppable can-do spirit. Coming up against her father’s old-world views, a farm worker undermining her success, and constant reminders of Rosie’s brothers lost in the war, Rosie realizes she wants more from life and love—but at what cost?

Italian immigrant Tomas Conti arrives at a neighboring farm, and sparks fly as Rosie draws close to this enigmatic newcomer. When an enemy appears with evidence of Tomas’s shocking past, long-held wartime hatreds rekindle . . . and an astounding family secret sets Rosie’s world ablaze. At the dawn of a new era, Rosie must make her own destiny amid the ashes of yesterday—by following her heart.

When The Past Is Our Present And Future

When I wrote Burning Fields, set in 1948 northern Australia, I wanted to tell a story that would resonate with readers today and inspire conversations about what has or hasn’t changed in the past seventy years around the world. My main character Rosie represents a generation of women who had gone to work as a part of the war effort, experiencing independence and learning non-traditional skills.

With her brothers lost in the war and her father in ill health, Rosie desperately wants to run the family’s sugarcane farm, but the conventions of the day and her own father won’t allow her to do something she’s more than capable of. Rosie’s battle for her voice to be heard, coupled with the immigration story of Tomas from Italy, highlights aspects of history that are still relevant to today—racism, sexism, and the roles of women and men in society.

When I was a kid in high school, one of my favourite subjects was history. I loved learning about ancient civilisations and people who had changed the world, so it was no surprise that when I started writing stories, I delved into different time periods and cultures for inspiration.

What I realised was most of the historical figures we studied were men. We learnt about history from a male perspective, the effect men had on the world, the wars they fought, but rarely did we learn about women’s history, or from the viewpoint of a woman. Even up until early last century, most women had had little voice. For example, women weren’t allowed to vote or work in politics, weren’t allowed to make decisions about their own body, couldn’t marry who they wanted or own property. Sadly, this is still the case in some parts of the world but, like throughout history, there are people working quietly, and sometimes secretly, creating networks, gaining strength and finding ways to change destiny.

If you’ve seen the movie or read the book Hidden Figures, you’ll understand how this historical narrative has had a profound impact on many people. Hidden Figures is about a group of amazing women who worked for NASA in the 1960s. They suffered racism and sexism, but rose to become some of the most influential women of their generation. Until recently, their story had fallen between the gaps of history but now we know about their experiences, we can learn and be inspired to change the issues many endure today. The Hidden Figures story is not just about individual achievements, it’s a beautiful example of humans bonding and gaining strength as a group while they help each other realise their dreams.

These days more women can vote and enjoy other freedoms, but there is still a long way to go before this is universal.It’s not a perfect world but the wheels are turning, and the voices are growing louder.

It’s heartwarming to see how much historical fiction is focused on women these days, and its popularity proves there is a need and desire to know more. Through these books we can celebrate achievements of those who’ve come before us, as well as learn from mistakes made. In a topsy-turvy world, it’s up to us—men and women—to encourage younger generations to learn about, and discuss, the past so we can create a more balanced future.

(Thank you so much for a fabulous guest post Alli. Having read Burning Fields, I can say that your writing has allowed the voices of the women you describe to shine through in Rosie.)

My Review of Burning Fields

A chance meeting on a bus will affect Rosie Stanton’s life in ways she could not imagine.

I was totally captivated by Burning Fields by Alli Sinclair from the first page. She writes with such attention to detail, be it historical or social, A treat for the senses, Alli Sinclair evokes setting so vividly in Burning Fields, whether it is Australia or Italy that I could picture the scenes in an almost cinematic way.

Rosie is very much a modern woman attempting to fit into a male dominated world. Her internal struggle when falling in love with Tomas but still wanting to be an independent woman is extremely well presented. She felt very real to me, as did all the characters. I found Tomas’s back story actually quite disturbing.

I loved the storytelling and was swept up in the events and the twists and turns of Rosie’s relationship with Tomas that are gradually uncovered with great skill. However, there are so many layers to this narrative. Burning Fields could simply be read as a hugely engaging romantic history, but it is much more than that. Alli Sinclair explores the impact of world events on the ordinary person. She weaves deep and important themes through Burning fields, from Fascism and racism to loyalty, love to war, feminism to patriarchy and sexism, family to PTSD, so that I really did feel I was given a greater understanding not only of the 1940s of the novel, but sadly, of many of the aspects still affecting the world today. Reading Burning Fields made me question how I might have behaved had I found myself in the same position as Tomas. The answers didn’t always make for a comfortable feeling.

It is Alli Sinclair’s ability to entertain, subtly to educate and to make the reader think that I feel makes Burning Fields such a good read. I really enjoyed this read.

Alli Sinclair is a multi award-winning author of books that combine travel, mystery, and romance. An adventurer at heart, Alli has climbed some of the world’s highest mountains and immersed herself in an array of exotic destinations, cultures, and languages. Alli’s books explore history, culture, love and grief, and relationships between family, friends and lovers.

Her latest book, Burning Fields, is a historical novel set in 1948 in northern Queensland, Australia(Kensington Books).

4 thoughts on “When The Past Is Our Present And Future: A Guest Post by Alli Sinclair, Author of Burning Fields”