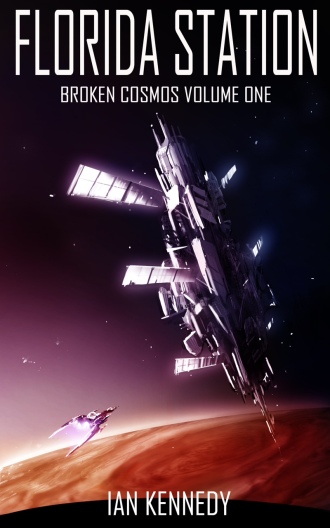 A genre I very rarely feature on Linda’s Book Bag is sci-fi and so I’m determined to put right that omission. With that in mind, I’ve invited Ian Kennedy to stay in with me today to tell me about one of his books!

Staying in with Ian Kennedy

Welcome to Linda’s Book Bag Ian and thank you for agreeing to stay in with me.

Thanks for allowing me this opportunity! 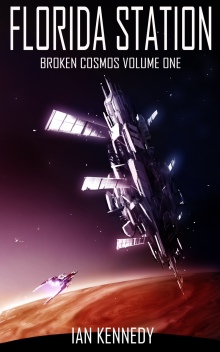 I have brought along my first book which is the start of my sci-fi trilogy. It’s called Florida Station: Broken Cosmos Volume One. It has been self-published on Amazon for a few months now. In fact, the entire trilogy is up on Amazon all at once. I chose this book as it was my debut novel. I am constantly writing new work, but this started it all.

I’m not particularly au fait with sci-fi so what can we expect from an evening in with Florida Station?

The best way to describe the Broken Cosmos trilogy and Florida Station would be to expect a dystopian cyberpunk space opera. It’s quite a mouthful, but it sums it up nicely. Each book flows into the next and it is more one story in three volumes rather than three separate books.

(This sounds interesting. Tell me more.)

The novel deals with the dangers of belief, addiction, and propaganda. It also deals with what it is to be a good person, mental health and the costs of war. It also looks at the danger of letting technology become all controlling in the process of zetting (a term I made up to describe the process of logging one’s consciousness into a computer and debugging the system with one’s mind.)

(I think I could do with a bit of zetting myself Ian actually!)

I’ll continue with someone else’s words. This is part of a review from someone on Amazon:

This book was a blast to read, the basic storyline follows three major characters as they struggle to survive in a dystopian future that’s both fascinating and bizarre. Their struggles are engaging in a sophisticated way — there are no heroes here, just humans scrabbling for existence. And although there are conflicts with physical enemies (i.e., other humans), the internal conflicts (addiction, suicide, loneliness) were much more moving, and were explored thoughtfully.

The world Kennedy has created is a post-apocalyptic one — humanity has achieved spaceflight, but only to the edges of our own solar system. In many ways though, humanity has become vastly ignorant and deeply superstitious, both tribal and violent. There are some fun flourishes here — religion has changed in ways that are both recognizable and grotesque. It’s a low technology world — no hyperdrives or ansibles or “beam me up Scotty” here, just a grim struggle for survival.

And finally the writing — there’s startling emotional resonance in places, where the book was really moving. And I loved the description of zetting — as a computer programmer by profession, I got a real kick out of that part!” – Ying Xiao

(That must have made your day – what a smashing review.)

Bear with me, please. I love writing, and I find inspiration from all over, but I love to write to music. I just find that if I put on some music while I write things just flow. My favourite type of music for writing is most forms of electronic music especially trance music. It just lets me think and write easily.

There are some forms of music I cannot write to, particularly death metal. It is just too jarring. Don’t get me wrong, sometimes death metal is fine, but not for when I’m writing.

Tiesto, Armin van Buuren, Dash Berlin, Deadmau5 and artists of the like are what I’m talking about. But I also like listening to rock-ish style music like Placebo, Muse or Yellowcard.

It’s difficult to describe but if the music is right, the words will flow.

Unfortunately, I need silence to edit as I have to concentrate hard on what I have written. It is a shame, as I like listening to music. But the editing must be done!

(It must indeed! A crucial part of the writing process I think!)

Thanks so much for staying in with me and enlightening me about Sci-fi and Florida Station in particular Ian. All the very best with your writing.

It is the 26th century. Zetting is the process of debugging a computer system by inserting a needle into one’s skull and navigating the computer’s circuits with one’s consciousness. Zetting is addictive and dangerous, but a huge rush.

​Alfred is a zetter. He lives and works on the run-down Florida Station, a space station orbiting Jupiter, controlled by the Solar Solutions Corporation.

​Alfred uncovers evidence of a conspiracy during a zet. It leads him down a path that will endanger everything he holds dear as he figures out what is going wrong on Florida Station.

Draz is a scavenger on a destroyed Earth ruled over by the Collective Zone. She becomes caught up in a civil war that has raged for decades after she finds an ancient hard drive, while scavenging, that contains important plans. To put things right she has to fight for her survival in a hostile Solar System.

​Artisius, the captain of the merchant ship Green Dragon, must negotiate a passage between Solar Solutions and the Collective Zone, which are in a state of cold war. He is trying to make a not so honest living.

​Never underestimate the power, and the danger, of hope.

Florida Station is available for purchase from your local Amazon site. 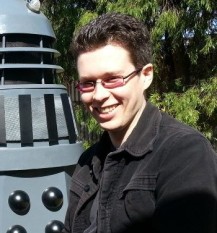 Ian Kennedy is a new author. He has been published a number of times in the Flinders University Writers’ Journal. Ian has always enjoyed writing and while completing a law degree at Flinders University in Adelaide, Australia, he never stopped writing small pieces of fiction, particularly science fiction. The work in the law degree helps Ian construct persuasive dialogue and use language effectively.

Ian worked as a lawyer before turning to writing full time.

Ian has a passion for science fiction. With his debut science fiction space opera novels of the Broken Cosmos trilogy: Florida Station, Martian Flight, and Neptune’s War, Ian explores humanity, war, mental illness and what it is to survive in a hostile Solar System.