I always enjoy reading children’s books so I’m very grateful to Sarah Hembrow at Vulpine Press for sending me a copy of Cindy Cipriano’s, The Case of the Toxic River, in return for an honest review which I’ll be sharing later in this blog post.

The Case of the Toxic River

Grace Brooks is a total and unashamed nerd.

She loves her life, her friends, and her little dog Neutrino. That is until one day she’s uprooted to Miller’s Island, North Carolina, to start over as the new kid in school.

There she meets Jack, and they quickly bond over their love of science and all things nerdy. Together they embark on an epic adventure, travelling through time to solve the mystery of The Toxic River.

The Case of the Toxic River is available for purchase from your local Amazon site.

The Case of the Mysterious Future 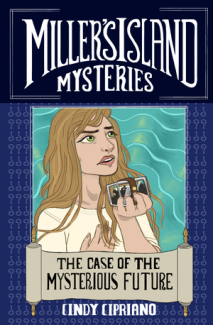 Grace and Jack are still trying to come to grips with their time-travelling experience as they eagerly await their next adventure.

After making a promise that they’ll always travel together, Grace is unexpectedly transported into the future, alone and scared. How did she get there? And more importantly, how can she get back without Jack there to help?

Picking up clues as she goes, Grace must try to navigate this new Miller’s Island and somehow figure out what sent her there in the first place.

The Case of the Mysterious Future is available for purchase from your local Amazon site.

The Case of the Magnetic Rocket Fuel

Their last time-travelling mishap still fresh in their minds, Grace and Jack are on edge about what might happen next. Grace’s memories of her solo trip to the future are never far away. When the future begins to seep out into the present, they must stick to the rules or risk the consequences.

They set themselves the task of finding out more about the mysterious ink, ending up in the past in a mysterious science lab. Could their new discovery also shed some light onto their mysterious friends at 21BUT22?

The Case of the Magnetic Rocket Fuel is available for purchase from your local Amazon site.

I grew up reading stories that were fantasy-based. I knew they were strictly fantasy, but I enjoyed trying to logic out the “magical” parts. When I decided to write the Miller’s Island Mysteries series, I wanted to create stories that seamlessly blend science and fantasy. It’s my hope these stories will be entertaining and at the same time, spark an interest in science in my young readers as they try to reason out the fantasy.

In Miller’s Island Mysteries (MIMS), 8th graders, Grace and Jack accidentally stumble upon the ability to travel through time. Their first trip sends them back to the 80s where they work together to solve the mystery of a fish kill on the Neuse River. I chose this first mystery because I felt readers would relate to an ecological tragedy and would put themselves into the story as Grace and Jack find out what caused the fish kill.

This series is quite different to my other middle-grade and young adult series. With MIMS I feel an obligation to present the science in the stories in such a way that readers will be driven to solve the mystery on their own. I enlist the help of a science consultant to be sure the science in MIMS is accurate then weave the science into the story. I also focus on building characters that are not only savvy, but also intelligent. Grace and Jack consider being called a Nerd, to be the highest compliment.They are funny, compassionate, and above all curious. These character traits appeal to my ‘tween readers who are just making their way in discovering their true selves. Grace and Jack are characters with whom my readers can connect because Grace and Jack are also discovering their own strengths as they solve mysteries like the fish kill, travel to nanoscience labs, and deal with accidentally seeing their future paths.

When writing for kids, it’s important all of these things are considered because young readers do not like being talked down to. It’s common knowledge that kids generally “read-up.” And so, it’s up to the author to write stories that are not only entertaining, but also excite the mind of the reader. It is so rewarding to hear that readers have taken to investigating MIMS mysteries on their own. In educational terms, this is known as self-directed learning, or learning for the pure enjoyment of it. When readers are intrinsically motivated, they feel challenged. This connection to the story combined with the challenge of solving the mystery helps grow the mind of the reader.

Grace and Jack will also grow. As the series progresses, they will leave middle school and enter high school. Readers will have the chance to watch Grace and Jack grow into young adults as they go through high school solving higher-risk mysteries. The science in the stories will become more complex and readers will grow right alongside of Grace and Jack.

I’m thankful and appreciative to be in the position to write stories that entertain and educate my readers. Even when they don’t realize they are learning.

I think you’ve done it brilliantly, Cindy. Here’s my review of the first book in the series:

My Review of The Case of the Toxic River

Newly arrived in Miller’s Island, science fanatic Grace is friendless and bullied, but life is about to get interesting.

I loved The Case of the Toxic River because it is perfectly pitched for youngsters aged 10-13 or so. There’s a little bit of burgeoning romance between Grace and Jack without it being the central consideration, so that children this age will be able to relate to the characters without feeling left out or different. More importantly, The Case of the Toxic River puts a ‘nerdy’ subject like science at the heart of the action, making it exciting and desirable. It’s even more important that Grace is a strong and feisty girl, giving the message that it is not just acceptable, but is actually thrilling, to be interested in science regardless of gender.

The central characters of Grace and Jack are accessible and appealing. They have their own problems, particularly Jack, which again gives an opening to children at the difficult pre-teen age a chance to explore grief, isolation, bullying, relationships and school life in a non-threatening way through their reading. Cindy Cipriano handles all these element brilliantly.

However, all this might make it sound as if The Case of the Toxic River is a ‘worthy’ read. It isn’t. It’s exciting, interesting and engaging. Fast paced action is balanced by the kind of practical questions like accessing food when you’ve just time travelled that children will always want the answers to making it relevant as well as being a thrilling read – and not just for children!

I really can’t fault The Case of the Toxic River. I thought it was an excellent start to the Miller Island Mysteries. I can imaging children gobbling up these books voraciously. Brilliant stuff!

Cindy Cipriano lives in North Carolina with her husband, son and their 27 pets.

Cindy’s first novel, The Circle, Book One of The Sidhe won the 2014 Moonbeam Children’s Book Silver Award for Pre-Teen Fiction – Fantasy. Other titles in the series include The Choice, Book Two of The Sidhe (2015) and The Lost, Book Three of The Sidhe (2017). This seven-book series is published by Odyssey Books.

Fading, the first in her young adult series, was published in April 2018. (Clean Teen Publishing). Fading is the tale of first loves and the consequence of dreaming up Mr. Right.

When Cindy isn’t writing, she enjoys spending time with her family and the avoidance of cooking.

One thought on “Writing Science For Kids: A Guest Post by Cindy Cipriano, Author of The Miller Island Mysteries”