Now, with over 900 books on my TBR I have promised myself that I won’t accept any more for review until I have read some of the ones I already have – and indeed I’m not accepting new blog tours at the moment either. However, when lovely Emilie Chambeyron from Harper Collins got in touch to see if I would like a copy of The Restless Sea by Vanessa de Haan in return for an honest review I simply couldn’t resist!

Published by Harper Collins on 19th April 2018, The Restless Sea is available for purchase through the links here.

Absorbing and richly observed, The Restless Sea is a masterful story of the turbulent years of the Second World War.

Jack, a child of the Blitz, has fled the law to become a seaman in the Merchant Navy. The frozen world of the Russian Arctic convoys may be harsh, but it opens his eyes to a new life.

While on leave in the Navy’s secret Scottish harbour, Jack meets Olivia, the cossetted daughter of an officer family. Free to roam, Olivia relishes the new freedom granted by war. But her family – and especially the well-connected Charlie, now a fast-rising pilot – don’t welcome these changes. Least of all the arrival of Jack, the boy who casts doubt on each of their futures.

The war inflicts danger and social upheaval like never before. But the most unlikely friendships are forged in times when people live like they don’t want tomorrow to come…

My Review of The Restless Sea

As 1939 Europe spirals into war, the lives of Olivia, Jack and Charlie will never be the same again.

The Restless Sea is an absolute epic of a read. Each time I thought Vanessa de Haan couldn’t possibly take the reader any further, the plot went hurtling off again so that reading The Restless Sea was akin to being on one of Jack’s convoy ships in the broiling ocean, sailing the highs and lows of every wave. Certainly there are coincidences that may stretch the reader’s belief at times but they had no detrimental effect on my absolute enjoyment of this novel and I loved the way it was plotted and resolved because it truly was a real roller coaster of a read.

What I so enjoyed was the gritty realism of Vanessa de Haan’s depiction of the war. I was thoroughly entertained by the narrative but incredibly educated too. In fact, at times, her presentation of the harshness Charlie and Jack endure was almost too great to bear. I had to give myself small breathers and breaks in my reading because it felt too intense a read simply to race through the fast paced story. Vanessa de Haan has the ability to transport a reader through her magnificent and frequently poetic descriptions – whether they want to go on the journey or not. I found some of the conditions, especially with regard to the weather and the Arctic runs, almost too hard to bear so that I was experiencing the same things as the characters. The descriptions of nature, the elements and living conditions were incredibly convincing and frequently quite disturbing. This is such powerful writing.

What I think works so well for The Restless Sea is the contrast between the sweeping historical aspects and the relatively small number of characters whom we get to know so well and intimately. I felt a profound sadness reading about Jack in particular so that I feel as if I understood his experiences, and therefore those of the real people of the era, far more acutely than perhaps I have before. Yes, there is romance and light amongst the shade in The Restless Sea, but this is no glamorised and sanitised version of events, making for a moving, captivating and fulfilling read that I think would suit many different readers.

I genuinely found myself thinking about the book when I wasn’t reading it, wondering how Olivia, Jack and Charlie were progressing without me. I thought The Restless Sea was an evocative and enthralling read and I know it’ll be lurking in my head for a very long time. I really recommend it. 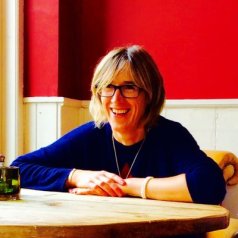 Vanessa de Haan is a historical fiction author, as well as a freelance journalist and editor. In 2005 she left an in-house job at The Spectator magazine in London and moved to Devon to concentrate on her own writing. She took the MA in Creative Writing at Bath Spa University and was a columnist on the Western Morning News for almost three years (writing under the name Zoë Kenyon).

Her first novel – The Restless Sea – is about the Merchant and Royal Navies during the Arctic convoys of the second world war, and was inspired by family stories as well as a love for the West Highlands of Scotland and the sea.

Vanessa still lives in Devon, and still proofreads and copy edits when not writing or tripping over small children, pouncing cats or a particularly enthusiastic flatcoated retriever.

2 thoughts on “The Restless Sea by Vanessa de Haan”