When the lovely team at Bookollective asked me if I’d like to help celebrate Scoop of the Year by Tom Claver I was so sorry I couldn’t find time to read the book as I was just leaving the country on my travels, but I really wanted to be part of the tour. Thankfully, they were able to step in and interview Tom for me so I’m thrilled to be able to bring you that interview today.

Scoop of the Year is published by Troubador and is available for purchase through these links.

Scoop of the Year 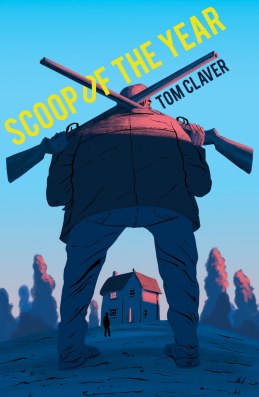 Martin, a hapless journalist on a weekly financial magazine, sees his life take a nosedive with the arrival of Tom de Lacy, a well-heeled reporter who grabs the limelight, not to mention the well-paid industrial correspondent’s job that he has his eye on.

He does his level best to sabotage Tom’s career, only to see his rival land a plum job in television.

But watching his rival’s success while his life disintegrates makes Martin a desperate fellow. Falling on hard times can be murder, and in certain circumstances could even give rise to it.

So when Martin gets a scoop on a major corporate scandal, he just has to grab the opportunity with both hands. He sees it as not only his turn to shine, but his duty.

A Bookollective Interview with Tom Claver

So, in a change to what normally happens on Linda’s Book Bag – over to Tom and Bookollective!

Who is your perfect reader?

The one who reads to the very end and feels a sense of loss when closing the book because they’ll miss my characters. Scoop of the Year is constructed as a thriller but you don’t have to be a lover of thrillers as it is a satire about journalism and ambition. The story is about life’s dreams, setbacks, and opportunities. The protagonist, Martin, is a dubious character who initially has no ambition apart from derailing the career of a rival reporter. But when a scoop lands in his lap, his ambition turns to outshining his rival despite the fact that it could cost him his life.

What books are on your bedside table?

There is an embarrassing pile of books gathering dust and making me feel guilty. I’m currently reading Eating People is Wrong by Malcolm Bradbury. The book’s humour really appeals to me and I love one particular line where a member of a literary society asks the protagonist, a professor of English, whether he knew lots of writers. He replies, ‘I know some, but I think I prefer people.’ Books still to be read include Jo Nesbo’s Phantom, Ace Atkins’ The Ranger, Stephen King’s Misery, and Michael Dobbs’ A Ghost At The Door.

Do you have a writing routine?

I write every day, unless I’m on holiday. Sometimes it’s just not possible to do much for one reason or another, but I will always write something or re-edit a chapter. I can’t start the day without a walk in the countryside followed by a good read of the newspaper, especially the obituaries. It’s so fascinating to read about a person’s life and the risks taken on the way. Then, I’ll make myself an espresso, as I’m a coffee addict, and get down to work. A break for lunch, and back to the grindstone in the afternoon.

Where do you write best?

In my head! The problem is committing ideas to paper; it is never quite the same as it was in my mind. I have a quiet study to carry out the physical task of writing and editing, but if I could only type directly from the part of my brain with all the brilliant ideas it would be so much better.

Where did your inspiration for Scoop of the Year come from?

After working 35 years in British newspaper and television newsrooms, I can assure you there was no shortage of inspiration.

What are you working on next?

I’ve been kicking around a few ideas, working on them separately until I feel one of them has legs. I’ve reached the stage to go ahead with one of the ideas and will now focus on making it work. It will be different in style to both Scoop of the Year, and my first book, Hider/Seeker, but it is nevertheless a classical thriller. I don’t really want to reveal too much about the new book as it is still early days.

(Thanks all – I really enjoyed finding out more about Tom and Scoop of the Year.)

Tom Claver was a director of a publishing company and is now a freelance journalist who has worked in print and television. He was brought up in London and currently lives in Dorset with his wife.