I’m delighted to welcome Ken Kuhlken, another former English teacher like me, to Linda’s Book Bag to tell me about one of his many books.

Staying in with Ken Kuhlken

Welcome to Linda’s Book Bag, Ken. Thank you for agreeing to stay in with me.

I brought along Newport Ave, because it’s brand new and a favorite of mine and  I wrote it as a sort of ode to my cousin Virgie. She was extraordinary. Smart, beautiful, and kind.

I often write about families and how the members affect each other. And I have to wonder what would’ve happened if Virgie’s dad hadn’t gotten sidelined by liquor. He was a warm and charming guy. Virgie loved him dearly. But he shot somebody and went to prison. Not long thereafter, Virgie was dating guys who appeared to also be headed for prison.

Later, while she was a flight attendant, she met and married an older fellow who was once a bodyguard for the infamous L.A. mobster Mickey Cohen. (By the way, you could read about Mickey Cohen and some of his wicked deeds in my novel The Angel Gang.) 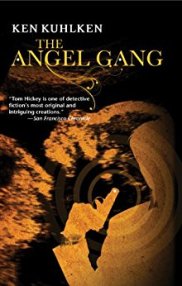 I adored Virgie. She was two years older but always treated me with respect and affection.

When her marriage dissolved, leaving her with big financial and other troubles, I wanted to help her but could think of nothing to do except to exercise what I’m all about, which is making up stories.

(Virgie sounds as if she’s had a really tough time. I bet she was a fascinating lady too.)

What can we expect from an evening in with Newport Ave?

Well, plenty of suspense. And you’ll meet some memorable characters: my lovely cousin disguised as Olivia; Greg, who attempts to make light of a probably fatal disease; James, a brilliant alcoholic on the run from the FBI; and FBI agent Miles, who’s falling for Olivia while trying to nab her brother.

(Gosh – that sounds quite a cast of characters!)

The story goes like this: As teenagers, Greg and James get jumped by the brothers of Greg’s girlfriend. In the scuffle somebody dies. James flees and only years later returns home to their California beach town, still wanted by the FBI.

Hoping to protect his sister Olivia from her estranged husband, a mob-connected gambler, he enlists the help of his old friend Greg, now a devoted Christian family man and Sunday school teacher. After exploring all options, they decide the only sure way to protect Olivia is to kill the gambler.

(It sounds as if you’re exploring all kinds of themes as well as writing a cracking narrative Ken.)

Though my novel fits into the noir tradition, it’s quite unique in that it explores the crimes from several perspectives, a bit like Lawrence Durrell’s Alexandria Quartet, which I consider a masterpiece.

(I have to confess I haven’t read Durrell.)

And, of course, since I did time as a high school English teacher, the our evening will conclude with discussion questions.

(We’ve BOTH done that time Ken so it could be a long plenary session!)

I brought this poem about Virgie:

Outside in the mineral pool where kids

shout and splash, our mothers —

one widowed, one divorced —

and I slouch against the wall between

the swinging doors and the jukebox while

or in news clips screaming their vows

to Elvis — Virgie reigns here in the rec room,

commanding obedience with her poise, tight

A boy with glossed black hair, his chinos

pleated and pressed, has won her provisional favor.

Virgie and this stranger dance

Stevie and I twitch and squirm.

Because we too are boys, we know of his scheme

to steal her away from us. We would

banish him from our world but

The jukebox lifts the record off the turntable.

The boy’s hand slides low on Virgie’s back —

he steers her toward the far door and his chopped

But she knows everything.

She spins toward us, dismissing

him with her royal smile. He freezes.

Only his throat moves.

about class, as in classy,

(I love that poem Ken. Thanks so much for sharing it with us.)

Thank you very much, Ken, for staying in with me to introduce Newport Ave. You’ve really whetted my appetite to read it. I hope it’s very successful.

A fugitive from a manslaughter charge returns home to a foggy California beach town hoping to protect his sister Olivia from her estranged husband, a mob-connected gambler.

He enlists the help of his closest old friend, now a devoted Christian family man and Sunday school teacher.

After exploring all options, they decide the only sure way to protect Olivia is to kill the gambler.

Newport Ave, a gripping novel in the noir tradition, explores crime and its endless consequences.

Published by Hickey’s Books, Newport Ave is available for purchase from all the usual places including here.

Some of Ken’s favorites are early mornings, the desert in spring, kind and honest people, baseball and other sports played by those who don’t take themselves too seriously, most kids, and films he and his Zoe can enjoy together. He reads classic novels, philosophy, theology, and all sorts of mysteries. On his blog, he offers some hard truths and encouragement about living as a writer. He has long been the author of novels, stories, articles, poems, and essays. Lots of honors have come his way, including a National Endowment for the Arts Literature Fellowship; Poets, Essayists and Novelist’s Ernest Hemingway Award; Private Eye Writers of America Best First Novel and Shamus Best Novel; and several San Diego and Los Angeles Book Awards. Though he advocates beer in a video, he actually prefers Scotch.

One thought on “Staying in with Ken Kuhlken”