The Ballad of Curly Oswald is available for purchase here and on Amazon.

The Ballad of Curly Oswald

Born in a woodland pond and raised in a hippie commune, Curly Oswald is the ultimate outsider, unhindered by conventional schooling or any administrative ties with the wicked System.

Now, confined to hospital following a near-fatal accident, he tells the story of his younger self and extended ‘family’, as they grapple with problems ranging from eco-friendly slug control to the mischief of a power-hungry guru.

An extraordinary chronicle of a lifestyle both alternative yet remarkably viable, a microcosm of eccentricity, comedy and occasional grotesque tragedy, it is told with the unflinching eye of a child and the sympathy of a narrator who sees the humour as well as the horror of life in all its deranged glory.

An Extract from The Ballad of Curly Oswald

We had plenty of musical evenings, usually round the Fireplace – (the fire made from dead branches only, of course). Erryk played reasonably well on his acoustic guitar, though Rick was by far the most accomplished musician. On his electric guitar, a black Stratocaster, he would perform some extraordinary solo riffs when he was in the mood. ‘He must be connected somehow to the spirit of Jimi Hendrix,’ said Zoë; of course she was biased. Sean had a pair of bongo drums, Tiger Lily her Balinese flute, and Ginnie a collection of exotic little percussion instruments. Us kids liked to invent our own; Rain, for instance, made himself a pair of maracas out of a couple of old tennis balls he filled with tacks. Not the most musical of the bunch, I still enjoyed bashing glass jars with bits of stick. Erryk showed me how to vary the note by filling the jars with different volumes of water.

We all sang, too. Stella had a particularly good soprano voice, clear and strong – our very own Joan Baez. Erryk knew the lyrics to all Bob Dylan’s songs, and composed his own Dylanesque numbers – including The Ballad of Curly Oswald written when I was still a toddler. ‘Born of fire, into water,’ it began, ‘of the wingéd elven daughter…’ I don’t think I need go any further.

And we had story-telling evenings as well: here Tiger Lily was the star, though once again everyone joined in. The stories were by no means always fictional or mythical. Often they dealt with real life, events from Lothlorien’s past – (my birth, for instance) – or weird, amusing, sometimes distressing encounters with Outsiders. These true-life stories were part of the glue which held Lothlorien together, an ever-growing oral history which belonged only to ourselves, the Elves’ Inheritors. That was what Sean called us. In those halcyon days men could get away with expressions like that.

These entertainments came at the close of days packed with activity for us children. There were games in the woods, of course – when we had the time. As soon as we were old enough, we were encouraged to take on simple responsibilities such as collecting the eggs and helping in the Garden. The best was the laundry run, when we did a round of the caravans to pick up dirty washing for the machine in the shower-block. The vehicle we used for this, which we either pushed or rode in, was a shopping trolley from the supermarket in Middington. It could become a car, a tank, a dragon… anything.

Then there were lessons, although lessons isn’t really the right word to use as it sounds too schooly. All the adults were happy to teach us their various skills if we showed an interest, but our principal instructor was Gogo. But no timetables were involved, no curriculum. ‘School,’ he would say, ‘is simply society’s method of conditioning kids to believe that for most of the week, for most of your life, you’ll have to be in a place where you don’t want to be, doing something you don’t want to do.’ He just taught what he felt like teaching at any given moment. This unpredictability was half the fun.

Quite often he would take us for a trip Outside. ‘Come on kids,’ he called one warm spring evening. ‘Jump in the car. We’re off to the seaside to learn all about tides and the moon.’

‘What about supper?’ I asked a little anxiously.

‘Will the ice-cream place be open?’ We loved going to the seaside. The nearest resort was less than an hour’s drive away.

‘No Curly, it’s closed at night. Anyway, we’re going somewhere much wilder than usual. But you know what? We’re going to look for driftwood and build a fire and then we’re going to bake some spuds and toast some of Marj’s homemade marshmallows. I’ve got a whole big bag. And we’re going to gather seaweed and make jelly with it tomorrow.’

‘And some more marshmallows?’ I asked. Marjoram used seaweed to make her marshmallows, gelatine being out of the question as it came from animals.

‘Quite possibly. Now listen to this, kids – if we’re really lucky tonight we might even see phosphorescence.’

We did, too. I’ll never forget that evening: the full moon rising like a golden peach, the swish of pebbles dragged back and forth on the beach by the waves, the scent and sizzle of the marshmallows that we stuck on skewers and held over the embers of the fire. And the tiny sparkles of brilliance drifting around the rocks – only a few, but enough to reduce even Rain and me to silence by their magic. ‘They’re sea-fairies,’ whispered Layla, and for once we had to agree with her.

The next day we wrote an account of our outing, as we always did – in my case lavishly illustrated as I loved to draw and was good at it. All of us could read and write by the age of five – because we wanted to. Books were a big part of our lives. Everyone had books, but the most interesting, to us, were Ginnie’s, as she had hung on to all her childhood classics, and Gogo’s, because he had picture-books about more or less everything. He also took us on regular forays to the library in Middington. I remember its fabulous smell – and the way in which parents often pushed their children away from us. ‘Gypsies,’ was a whisper we heard more than once. ‘We are not,’ Shine would reply loudly and loftily. ‘We are the Elves’ Inheritors.’ But that didn’t seem to help much.

Perhaps the most varied collection of literature, and the one which finally absorbed me the most, was Jack’s. I realise that up till now I’ve only once mentioned Jack in passing, and Loose not at all – the two people who were to be absolutely pivotal in my life as I started to grow up. Even now they still stir up a powerful and ambivalent cocktail of memories.

But they didn’t arrive until the autumn of ’76. Arjuna and all his mischief-making happened first.

(Now that really makes me want to get cracking on my TBR so that The Ballad of Curly Oswald gets to the top!)

Now, here’s the thing. I have a Linda’s Book Bag house style and I usually post a photo of the author here, followed by a brief biography and social media links. This time, however, I have nothing for you. Even Indie Books don’t know the true identity of Curly Oswald and whether The Ballad of Curly Oswald is a memoir or fiction! You’ll just have to enter the giveaway and see if you can work out the author’s identity if you win!

A Paperback Copy of The Ballad of Curly Oswald 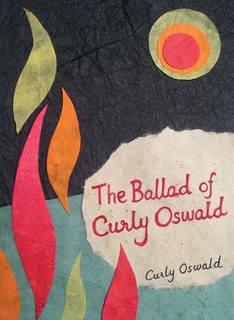 For your chance to win a paperback copy of The Ballad of Curly Oswald, click here. Giveaway open internationally and closes at UK midnight on Monday 26th March 2018.