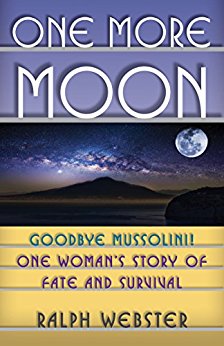 With Jewish History Month approaching, I’m delighted to welcome Ralph Webster to Linda’s Book Bag today to talk to me about his inspiration for one of his books that I think will be perfect for those looking for a suitable book to read this coming month.

If you’re an author who’d also like to stay in with me and tell me about one of your books, please click here for more details.

Staying in with Ralph Webster

First, Linda, thank you for allowing me to be here.  I am grateful for the opportunity to tell you about my new book, One More Moon.  The subtitle reads Goodbye Mussolini!  One Woman’s Story of Fate and Survival.  This is the true story of my grandmother’s desperate journey from her comfortable life at the Pensione Alexandra in Naples, Italy to America – after Mussolini and the Fascists joined with Hitler – and as countries across the world closed their doors to Jewish refugees fleeing the spread of Nazi evil.  Amazon releases One More Moon tomorrow.

Sounds fascinating. What can we expect from an evening in with One More Moon?

I am sure that, like most authors, I hope my storytelling will keep you up late, well past your bedtime.  I know I want books I read to take me to special places that I never expected to find.  I want a book to touch me in a way that makes me feel that I am living within the story.  I hope One More Moon strikes that chord with my readers.   That’s what you should expect.  Whether that expectation is fulfilled is something for you to decide.

(This sounds a perfect reason for writing to me Ralph.)

There is a purpose to my writing, a backdrop, a story behind the story.  I hope that will help make your decision.

A little more than two years ago my wife, Ginger, and I spent eight weeks in Europe traveling.  At our stage in life we have the luxury of being able to take off for big chunks of time.  This was a pleasure trip.  We were taking trains, backpacking, hiking, biking, and celebrating the good life.  We started in France and ended in Stockholm for a jazz festival.

Ironically our trip coincided with the rapidly growing refugee crisis in Europe.  Refugees in large numbers were searching for safety, security, and economic opportunity.  They were fleeing Syria and other areas under siege.  At night we watched the news reports on CNN and BBC.  And, by day, we encountered groups on trains, at train stations, in cities, in small towns, and at border crossings.  Right before our eyes we watched mothers, fathers, children as they struggled with their difficult journey.   Indeed, they were strangers in a strange land.  We saw conversations and confrontations with authorities – some civil, some heated.  We saw people being removed from trains and taken away by the military and police.  And, we recognized the difficulty and frustration when trying to communicate across the medium of different languages.  It was easy to see that these were people looking for a hand up, not a hand out.

This sober reflection of humanity touched our hearts.   How can we not all feel compassion for those forced to leave their homes through no fault of their own?  Yet, the reality is that the issues surrounding refugees and immigration are complicated and not easy to resolve.  These are not new.  They are generations old.  And, I suspect as long as we live in a world where some have more and some have less, many of these difficult issues will continue.

I was born into a family of refugees and was raised to believe in an America that embraced the value of opportunity for everyone willing to put in a hard day’s work.  Watching this silent procession of mothers, fathers, and children made me realize that this is what my family must have experienced.  It may have been a different time, a different circumstance, and a different generation.  But, I am certain that the feeling was much the same – the anguish, the loss, the confusion, the uncertainty, the isolation, the fears, the unknown.

That is what inspired me to write my books and to tell my family’s story.  I am afraid that far too often, refugee and immigration issues have become involved in the politics of fear.  Storytelling is my way to try to shine a light on these issues.  I want others to understand the personal depth of this humanitarian crisis.  Mine is not a plea for money.  It is a plea for compassion, respect, and dignity.

(What an incredibly moving background to your book, and indeed your life Ralph. Thank you for explaining it so eloquently.)

I have brought two 1920’s pictures to share with you.  These are my reminders.  The first is a photo of my father and his three sisters in Germany.  The second is a photo from my mother’s side of the family – my grandparents and their children in Naples, Italy.

These remind me that all most of us want and hope for is a good life for our families.  What separates refugees from others is a very thin line, a line that can suddenly appear, a line that can be very unfair, a line that can change everything.  I hope my books remind readers how much we are all the same – except for that single difference.  Through no fault of their own, refugees are people like you and me who have no choice but to leave their homelands with literally the clothes on their backs and usually for one terrifying reason – they fear for the lives of their families.  My story within a story?  I want us all to recognize that refugees are the victims.  Please do not allow our world to make them become the enemy.  Thank you.

No, thank YOU Ralph, for being such a wonderful guest to stay in with. I have found hearing about One More Moon a very interesting and humbling experience. Thank you for staying in with me to tell me about it.

Goodbye Mussolini! One Woman’s Story of Fate and Survival

Goodreads Choice Nominee Ralph Webster tells the true story of his grandmother’s desperate journey from her life at the Pensione Alexandra in Naples to America – after Mussolini and the Fascists join with Hitler – and as countries across the world close their doors to Jewish refugees fleeing the spread of Nazi evil.

In 1934, at age fifty-one, Elsa’s comfortable life in Mussolini’s Fascist Italy changes remarkably when she and her husband, Paul, purchase the Pensione Alexandria overlooking the Mediterranean in Naples. Though German Jews, they are embraced by their Italian neighbors, and for the next several years, the pensione flourishes and becomes their perch to observe the world’s events. Travelers from across Europe and America come to the door, each with their own story, mystery, or surprise. Nearly all have been touched in some way by the ominous changes occurring to the north, in Nazi-controlled Germany.

When war breaks out in Europe and Italy sides with Germany, Elsa and her family’s fears are quickly realized. The growing sense that the atrocities in German-occupied lands will soon occur in Italy forces them to give up their pensione and attempt a desperate journey to safety in America. The way seems impossible. Day by day, war makes travel increasingly difficult as countries begin closing their doors to refugees.

Told in Elsa’s words and written by her grandson, One More Moon is the extraordinary story of a woman and her family’s often harrowing experiences in the years before and during World War II.

One More Moon is available for purchase here. 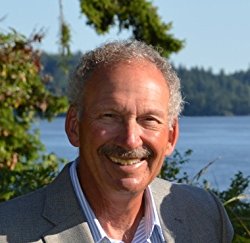 Whether in person or online, Ralph welcomes and values his exchanges with readers and makes every effort to participate in conversations about his books. Now retired, he lives with his wife, Ginger, on the Outer Banks of North Carolina.

9 thoughts on “Staying in with Ralph Webster”