I’m beginning to think I see more of Ross Greenwood than my own husband! As Ross lives in my nearest town we meet at bookish events and he’s been here on Linda’s Book Bag several times already. Consequently, I’m delighted to be helping reveal the latest of Ross’s books, Abel’s Revenge today. There is to be a tour for Abel’s Revenge later too so do please come back to read a cracking guest post from Ross on 27th March.

If you’d like to see what Ross and I have been getting up to you can read a Lazy Blood interview here, a guest post and my review of The Boy Inside here and my review of Fifty Years of Fear here. 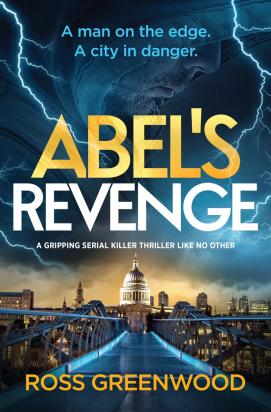 This is a story about a city. As with all others, it’s a place of violence. There are murderers, and they live among us.

This is also a tale about a couple — sometimes friends, occasionally lovers, but always partners. Dan and Olivia are fighting modern battles; the ones parents have over a lack of money, time or peace.

An escalating serial killer terrifies the streets and homes. The body count rises as their relationship crumbles. Society reveals its dark side, and no one is safe. Dan and Olivia experience this first-hand as danger closes in.

Will Abel’s reign of terror ever end?

Who will live and who will die?

Ross Greenwood was born in 1973 in Peterborough and lived there until he was 20, attending The King’s School in the city. He then began a rather nomadic existence, living and working all over the country and various parts of the world.

Ross found himself returning to Peterborough many times over the years, usually, so he says “when things had gone wrong.” It was on one of these occasions that he met his partner about 100 metres from his back door whilst walking a dog. Two children swiftly followed. And, according to Ross, he is “still a little stunned by the pace of it now.”

Lazy Blood book was started a long time ago but parenthood and then four years as a prison officer got in the way. Ironically it was the four a.m. feed which gave the author the opportunity to finish the book as unable to get back to sleep he completed it in the early morning hours.

Ross Greenwood’s second book, The Boy Inside, was picked up by Bloodhound Books, and now, Fifty Years of Fear, is out. All his books are thought provoking, and told with a sense of humour.