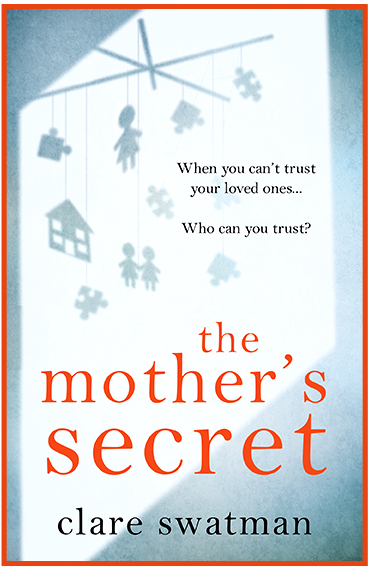 I recently met Clare Swatman and having so loved her previous book Before You Go, my review of which you can read here, I was thrilled to be asked to be part of the launch celebrations for Clare’s latest book The Mother’s Secret. I’m delighted to be sharing my review of The Mother’s Secret as well as staying in with Clare today.

The Mother’s Secret will be published by Pan Macmillan on 22 February 2018 and is available for preorder through the links here.

The Mother’s Secret is a powerful story about family, secrets and devastating lies

Love keeps us together

Sisters Kate and Georgie have always shared a close bond. While Kate enjoyed the freedoms of youth, Georgie remained at home. But now Georgie is grown up, it’s time she started exploring.

Love can tear us apart

Their mother Jan loves her daughters with all her heart. So what if she kept them out of sight when they were young? She just cared for them so much. She wanted to protect them.

What if your life was based on a lie?

Maybe there was another reason for Jan’s protective behaviour? If they ventured too far afield, it might destroy the facade of their childhood. This family’s about to discover that while lies can cause pain, the truth could destroy them all.

Staying in With Clare Swatman

Hello Clare. It was lovely to be out at a bookish party with you recently and I’m delighted to be staying in with you today. Which of your books have you brought along to share and why?

Hello, lovely to be here! After much deliberation I decided to bring along The Mother’s Secret – because that’s the one that’s out on 22 February and that I’m really excited about!

(I imagine you are!)

It’s quite a different kind of story from my first book, Before You Go. This time, there’s no element of magical realism to carry the story along; instead, it’s all about a family, and how discovering long-buried secrets can tear a family apart.

I loved writing this book, especially the middle section, which is set in the 1970s. I loved immersing myself in the time and the place – it’s set in Cromer, Norfolk – and to research it I visited the town and spent some time in the library looking at photos of the area at the time. I also had a great first-hand source of information in my mum. She grew up in Suffolk in the 1960s and 70s, and was about the same age as Jan. So she was able to provide me with lots of details about where they’d go for nights out, what music people listened to, what they drank, what they wore. It was fun – and chatting to her about it was a bit of an eye-opener too!

(I thought the era was really evocatively presented. Maybe your Mum should write a book too!)

What can we expect from an evening in with The Mother’s Secret?

It’s a difficult story to define as it’s a bit of a cross between a romance and a thriller – at least that’s what I’ve been told! – in that it has a love story, of course, but it also has a big hidden secret that has terrible consequences for the people involved.

Georgie and Kate are sisters and have been brought up by the their mother Jan. They never knew their father, who died before Georgie was born. All their lives they’ve been very protected, but as they got older Kate went out into the world and went travelling and got married, while Georgie stayed at home and helped her mother out. She thought about doing the same things as Kate, but never got round to it, in part thanks to her mother discouraging her. Then one day she makes a discovery that shatters her world – and make her question everything she’s ever known, including her love for and bond with her mother and sister. The trouble is, her mother is suffering from early onset Alzheimer’s so she can’t ask her any of the questions she wants to ask – and so she has to find out the answers by herself.

That’s the present-day story. In the past, we find out exactly what happened to Jan to make her so protective and secretive. And it’s not an easy read, in the end, so make sure you have a packet of tissues handy. Although I would add, it’s not a complete sob-fest and you hopefully won’t close the last page feeling too sad!

(I think you’ve summed up The Mother’s Secret perfectly as readers can see in my review below.)

Well, I thought I’d keep the evening in the theme of the 1970s, so I’ve brought along a bottle of Babycham and a mix tape of songs mentioned in the book which include gems like So Tired of Being Alone by Al Green, Save Your Kisses for Me by Brotherhood of Man, Killing Me Softly by Roberta Flack and Love is Like a Butterfly by Dolly Parton.

I hope you enjoy it – cheers!

I did indeed Clare. Thanks so much for staying in with me and telling me more about The Mother’s Secret.

My Review of The Mother’s Secret

Georgie and Kate are worried about their mother, but little do they know quite what is in her past.

I thoroughly enjoyed The Mother’s Secret because I found so many layers to beguile and entertain me. Alongside the mysterious element of the plot and the love story presented between Jan and Ray, Clare Swatman also explores the nature of relationships in families, mental illness and the devastating effects of grief with a deftness of touch. This makes it sound as if The Mother’s Secret is very dark and depressing, but not a bit of it. Certainly there is deep emotion, particularly in one section, but there is also elevating liveliness through the music, clothing and social picture of the 1960s and 1970s, alongside some humour which all serve to engage the reader in a lovely story.

I really appreciated the way in which The Mother’s Secret is structured. The four sections that gradually uncover the truth of the past feel very satisfying and I thought the variety of sentence structure gave impetus and depth. It might sound odd to say I loved the white spaces in a review of what is written, but Clare Swatman uses them as a kind of entr’acte that gives time for reflection and helps the reader absorb the nuances of the narrative.

The way Jan’s section set in the past is in the first person when now she is suffering from dementia was cleverly done, showing who she once was and reminding us as readers that we never know quite what fate has in store for us. There’s even a direct address to the reader at times so that I felt I could understand her perfectly. I think, however, that it was Ray who actually appealed to me most. He forms a backdrop to much of the action so that I felt sorry for him despite his flaws.

The Mother’s Secret wasn’t quite what I was expecting, as I thought it would be more of a psychologial thriller, but it left me feeling I had encountered real people with tragic lives whom I loved getting to know. It had a little bit of everything to appeal on so many levels, from recent social history to romance and a mystery so that reading The Mother’s Secret has something for everyone.

Clare Swatman is a journalist for a number of weekly women’s magazines. Clare was Features Editor for Bella and has written for Best, Woman’s Ownand Real People. She writes for her local magazine as well as the travel pages for Take a Break. Clare lives in Hertfordshire with her husband and two boys.

Before You Go was her first novel. 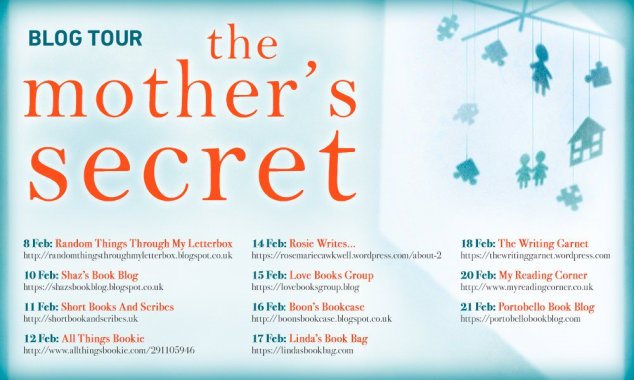 8 thoughts on “The Mother’s Secret by Clare Swatman”