One of the aspects of blogging that always confuses me is when writers don’t always have books out under their real names! With Riverside Lane written by Ginger Black I was surprised to find that one of the authors was actually Julia Thum! Julia has kindly agreed to stay in with me today to tell me a bit more about Riverside Lane and her collaborative writing with Gaynor Pengelly.

If you’re an author who’d also like to stay in with me and tell me about one of your books, please click here for more details.

Staying in with Julia Thum

Welcome to Linda’s Book Bag Julia. Thank you for agreeing to stay in with me, even if you did totally confuse me! Tell me, which of your books have you brought along to share this evening and why have you chosen it?

Hello Linda and thank you for inviting me to stay in with you.  I have bought you Riverside Lane which I co-authored with Gaynor Pengelly under the pen name Ginger Black.   Here’s a photo of the book – I’d like to claim that’s me reading it but I think we all know it isn’t!

(Now wouldn’t that have been a wonderful reader to have!)

What can we expect from an evening in with Riverside Lane?

We will enjoy a cozy mystery and an evening of escape to an English village in springtime where curtains twitch behind perfect privets and everybody has a secret.  One reader called the novel “the literary equivalent of a glass of Pimms” and another “Agatha Christie on steroids” so I think that might give you a sense of what to expect.

(‘Agatha Christie on steroids’ – I love that definition. I can’t wait to read Riverside Lane now!)

I’ve come with Gaynor, of course, and also a life-size cardboard cut-out of George Clooney.  Riverside Lane is set in our home village of Bray on Thames and Mr Clooney lives a few miles downstream from us.  We like to pretend he’s our neighbour so it seemed appropriate to bring him around to you and we have him in mind to play Riverside Lane’s mystery man, Luca Tempesta, when our novel is made into a film.

(I had no idea it’s possible to purchase a life-size cardboard cut-out of George Clooney on a well known online shopping site until this post, Julia!)

I’ve also bought a picnic basket containing Pimms, of course, as well as take away fish and chips from Heston Blumenthal’s village pub The Crown which features heavily in our novel as the site of all manner of shenanigans and gossip.

(I’ve been eating quite a lot of fish and chips when staying in with authors Julia, but these sound especially good!)

There’s also a manuscript of my new children’s novel, The Witches’ Punchbowl which will be out later this year – I’ve bought it simply because it’s just finished, I’m bursting with excitement about it and feel the need to wave it under everybody’s noses or a few weeks.

(Oo – I love children’s fiction so you’ll have to return when The Witches’ Punchbowl is published and we can have another, different, evening in together.)

Then we have a huge bar of dark, dark chocolate for pudding and a massive, Alice in Wonderland proportion, pot of earl grey tea with three porcelain cups and saucers as I’m a firm believer that tea tastes better out of good china.

Tea and chocolate are two of my very favourite things so I’ll be inviting you back again to stay in again very soon. Thanks so much for staying in with me and telling me about Riverside Lane Julia.

Thank you so much for having me this evening Linda.  We’ve met on Twitter and through Facebook and it is lovely to finally get together and chat properly.  Good luck with this great new feature – I shall follow it with interest and look forward to the party when you get us all together – I’ll bring George if you like!

I’ll hold you to that!

After arranging a house swap with a debonair antiques dealer, a darkly handsome American named Luca Tempesta arrives in a quaint English village. Tempesta, who claims to run a detective agency in Los Angeles, is supposedly on holiday but the inhabitants of the village are unconvinced.

Yet, as they attempt to solve the mystery of the stranger in their midst, it gradually transpires that there are more than enough secrets to go around in the village itself, harboured by the local MP and his uptight, ambitious wife; the has-been former game show host; the respectable couple with the jailbird son; the hometown journalist, striving for a scoop that will rescue her from debt; and so on.

The place is revealed as a labyrinth of deception masquerading as a picture-postcard hamlet; tension begins to mount in between the dinner parties and evenings at the pub, and soon culminates in an unexpected death. Behind perfect privets and brightly painted front doors, the lives of Riverside Lane’s residents slowly unravel.

Tempesta, guarding his secrets with a vengeance, is suddenly threatened with exposure by the elderly religious zealot Ivy Midwinter, whose own past involved keeping professional confidences. When she challenges him in church, she learns that Tempesta will stop at nothing to protect his privacy …

Set against the exquisite backdrop of a gastronomic village by the Thames, Riverside Lane is a tautly paced page-turner that also gently satirises middleclass English manners: the upstanding denizens of the village watch and whisper behind a mask of English hauteur, whilst their own fragile lives come undone.

Riverside Lane is published by Momentum and is available for purchase here. 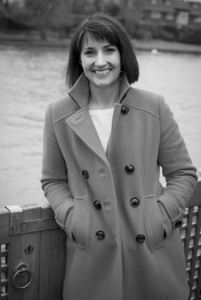 Julia grew up on a farm where she spent her formative years damming streams, riding ponies, losing her wellies in the bog and making tree houses. There was a boring chunk in the middle of life when she tried to be mature and sensible, then her kids came along and gave her the excuse to revert back to childhood.

Julia’s body lives with its family in Bray, on the river Thames, but her mind lives in a world of magical mystery, eccentric people and endless adventures that she shapes into compelling characters and intriguing stories.

Julia is happiest outdoors, on her kayak paddling up the Thames, jogging along the towpath or walking her dog Rumpole. She does occasionally do a bit of cooking and enjoys that, as well as helping the kids with their six tortoises and four rabbits that crawl and hop around our garden. Julia can also be found doing the odd headstand under a tree when the wind is in the east.

As well as writing adult fiction with Gaynor under the pen name Ginger Black, Julia reviews children’s books at Julia Thum, is a regular guest on BBC Berkshire’s Book Club and has just completed her first children’s novel, The Witches’ Punchbowl.

7 thoughts on “Staying in with Julia Thum”