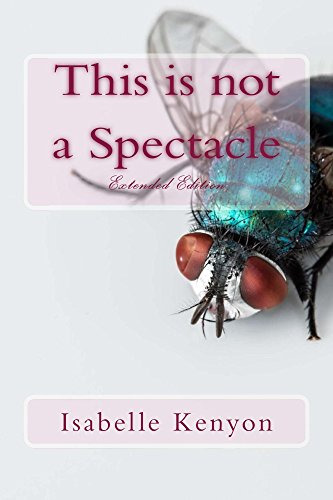 I’ve thoroughly enjoyed returning to reading poetry this year and so I am incredibly grateful to Isabelle Kenyon for a copy of her anthology This is not a Spectacle in return for an honest review.

This is not a Spectacle is available for purchase here.

This is not a Spectacle

This is not a Spectacle explores human curiosity towards strangers and investigates where curiosity becomes fascination with another’s grief or misfortune from afar.

The poems range from my experiences of a car accident, my own fascination of others and strangers’ impressions of me.

It is an expression of anger from those who least want to be stared at and be put on display.

My Review of This is not a Spectacle

All of society is laid bare in the poems of This is not a Spectacle.

I really enjoyed reading this anthology. I wouldn’t say that the imagery and syntax are polished and refined, but that is the appeal of these poems. Isabelle Kenyon writes with a raw honesty that conveys true emotion and belief.

The different sections explore the underside of humanity and identity, frequently raising the issue of how we mis-treat others in society, from the bullying of someone because of their name, through mixed race relationships and the depersonalisation of the elderly in care homes to the violence of sexual abuse so that any reader can find a poem to make them think, to question their beliefs and to consider their own attitudes and positions. This is not a Spectacle is very much an anthology that feels personal to the poet, Isabelle Kenyon, but at the same time is no less resonant to the reader.

I found the poems set in India fascinating and will return to them after my visit there later in next year to see if they match my personal reflections. I especially loved the poem Identity – Granny Olga, particularly the last two lines as I felt they conveyed such love and optimism. I was curious throughout about the title This is not a Spectacle and when it became clear at the end of Letter To My Younger Self I almost punched the air in triumphant affirmation. This is a poem all young people could benefit from. There is quite an abrasive undertone to many of the poems, with quite a feminist perspective that I think will enlighten many readers too, especially those poems with quite strong expletive language or a quite disjointed physical structure on the page that reflects the subject matter.

This is not a Spectacle is an interesting and insightful collection that considers humanity from many angles. I thoroughly enjoyed it.

Isabelle Kenyon is a poet, blogger and book reviewer. Her poems have published online for Bewildering Stories and as a Micro Chapbook for Origami Poetry Press. Isabelle has also featured in poetry anthologies such as Anti Heroin Chic, Literary Yard, the Inkyneedles anthology, Poetry Rivals, and the Great British Write Off. Isabelle has won awards and commendations from The Wirral festival of Music, Speech and Drama,the Festival of Firsts, the Langwith Scott Award for Art and Drama and the Visit Newark Poetry competition.

3 thoughts on “This is not a Spectacle by Isabelle Kenyon”