I was delighted to be asked by Sandstone Press to be part of the launch celebrations for A Message from the Other Side by Moira Forsyth. Moira has agreed to write for Linda’s Book Bag about a message she’d like to receive from the other side and in the spirit of collaboration, I’m writing a short piece too alongside my review.

A Message from the Other Side was published by Sandstone Press on 20th July 2017 and is available for purchase here.

A Message from the Other Side

When Catherine moves several hundred miles away from her sister, Helen says phone calls aren’t enough, but they make it easier to edit the truth. Helen can dismiss Gilbert and his enchanted Factory as weird when she’s never met him, and Catherine thinks Helen foolish for loving the unreliable and dangerous Joe. Neither sees the perils concealed in what they have not told each other, or guesses at the sinister connection between their separate lives.

A Message from the Other Side is a novel about love and marriage, but even more about hatred and the damage people do to each other in the most ordinary of families.

The Message I Want to Hear

I didn’t always have an easy relationship with my mother. She grew up in a farming community in the North East of Scotland, at a time when it was the boy in the family who was educated. My uncle became an architect; my aunt and mother learned shorthand typing and became secretaries. When my sister and I were born, my mother stayed at home to look after us. She said she always loved doing that, but she knew she had missed out. If she had been given the chance, she said, she would have been a lawyer. She also wrote stories, quietly, never sending them anywhere.

For my sister and me, there was no choice: we were bound for university. When I muttered something about Art School, that was swept aside. University. A degree. Then, she anticipated, I’d be a teacher. I got my degree, but I didn’t want to be a teacher. I was going to write. For ten years I moved from job to job, none of them paying well or providing me with much satisfaction, while I wrote several unpublished novels. When I had my son, I felt for the first time wholly approved of. ‘He’s beautiful, Moira,’ she said. Of course he was, and so was my daughter, two years later. For a long time, my mother and I got on very well.

I was not so popular when my marriage broke up. Divorce was not what people did, in my family. In the end, after a difficult few months, we talked, properly, for the first time for years. We became close, and when she grew frail in old age, I felt enormous pity and love, that someone so bright and clever, so quick in her thinking, had lost the ability to think coherently at all.

After her death, she still seemed near. I wondered what message she had for me ― that there was something, I was sure.

My daughter now has a sixth month old son of her own. She’s rather like her grandmother, knowledgeable, intelligent and intuitive. Yet all through these early baby months she has asked my advice, because she’s in uncharted territory, and as anxious as I was more than thirty years ago, to do her best. I want to advise her and say the right thing, but hesitate. If only I could ask my own mother! I’d say, what do you think? You always knew what to do. Whatever was wrong with the children: a crying baby, a rash, a fever, a niggling worry ― you knew the answer and could reassure. Whereas I feel I’m making up being a granny just as I made up being a mother. I desperately want to be good at both – to be as good as you were.

My Own Message I Want to Hear

I’ve had these questions in my mind for as long as I can remember, so today I’m going to ask my Grandfather for some answers. Here goes:

Although I never met you, as you died when my mother was 16, there is so much I want to know. I’m going to keep this simple and just list my questions to you.

What had been happening in the past that meant you married again six weeks after my grandmother died as a result giving birth to my Mum?

Why did you parcel Mum out as a 12 week old baby to live with relatives and not keep her and her siblings?

Why didn’t Mum know she was fostered and that her Mum and Dad were really her aunt and uncle until she was 8?

What happened to your son, the brother Mum never knew?

Are you aware of the impact your actions have had in making Mum insecure for the whole of her life?

My Review of A Message From The Other Side

Very different sisters Catherine and Helen have more in common than they might imagine, including men.

Initially I didn’t understand A Message From The Other Side at all. I wasn’t sure where it was headed and why it was going to be divided into the time frames it has. It puzzled me.

However, as I realised that A Message From The Other Side isn’t a psychological thriller or a supernatural read or women’s fiction where I was trying to place it, but rather a narrative that explores relationships in exquisite detail I understood what Moira Forsyth was doing and loved the read. I moved from being uncomfortably puzzled to intrigued and ensnared.

This is character driven writing at its best. I absolutely loathed Kenneth throughout, regardless of any redeeming features he has, or actions he makes. He repulsed me completely both physically and emotionally. And yet he’s just human. This is what is so skilled about Moira Forsyth’s writing. She doesn’t make judgements but she presents her characters in such a way that it is impossible not to respond as a reader. I would have loved to have met Hugh and found Catherine and Helen flawed, foolish and utterly understandable. I railed at both Helen and Catherine for their relationships with Kenneth and Joe. Reading A Message From The Other Side made me quite uncomfortable too as I have a horrible feeling I would have a very snobbish and condescending view of Rose were I to meet her.

Moira Forsyth presents relationships and all their complications in intense, beautifully written prose. I found an underlying sadness behind the writing as Moira Forsyth explores how half truths and omissions can affect our lives. There’s a pared down plot so that even though there is a mystery surrounding Catherine’s seeing dead people from the beginning of the book, this isn’t the roller coaster read some might expect. It is, however, an emotional exploration of humanity, of loneliness, love, fear hatred and the glorious intricacies of relationships.

Moira Forsyth is the author of four novels, and a published poet and short story writer. She has been a registrar of births, deaths and marriages, sold hotels and catering properties, been a bookshop manager, a lecturer and schoolteacher, and taught in a Young Offenders’ Institution. Moira is now an editor, and has worked on a wide range of fiction and non-fiction books. Moira has two grown-up children (non-resident), two cats (resident), and lives in the Highlands of Scotland. 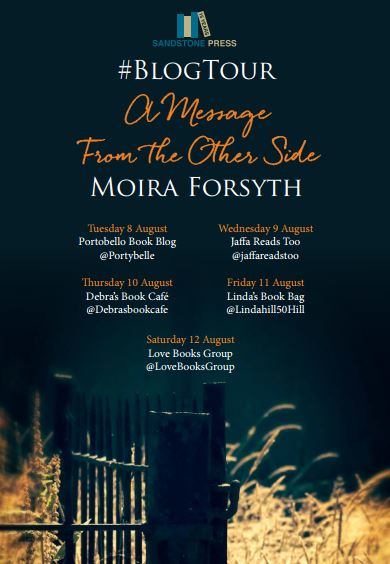