I’m delighted to be part of the launch celebrations for Follow Me Down by Sherri Smith. I love a good thriller so I’m thrilled to be able to share an extract from Follow Me Down with you today.

Follow Me Down is published by Titan on 21st March 2017 and is available for purchase in e-book and paperback here.

Mia has built a life for herself far from the small town where she grew up. But she is forced to return home when her brother goes missing. Once the golden boy of the community, Lucas has disappeared the same day as the body of his student is pulled from the river. Unable to reconcile the media’s portrayal of Lucas as a murderer with her own memories of him, Mia is desperate to find another suspect. But if Lucas is innocent, why did he run?

Wayoata does not have its own airport. The earliest flight landed in Bismarck. I had to drive another three hours northeast to get there. I’d reserved a silver sedan online, but the car rental clerk handed me keys for a candy-red PT Cruiser and tried to up-sell the insurance coverage. I asked for something else, anything else. The color didn’t matter—it could be a beige or black sedan, the kind of car that didn’t draw any attention (negative or positive)—but the clerk just shrugged helplessly.

The drive was claustrophobic, with open fields so lacking in depth and dimension the view could have been a canvas backdrop. The sun lit up the greasy bug spatters on the windshield; they looked like a demented child’s finger painting. After leaving for college, I’d returned once a year for Thanksgiving and would sit in my mother’s room, plate in lap, silently picking away at the pinkish turkey the care home provided. Once Lucas moved back, nearly five years ago, I no longer felt obligated to make an annual visit, telling myself that Mimi now had Lucas to visit her anytime she wanted and that was important to me, that Mimi had someone. Equally important was that the someone wasn’t me.

I knew I was getting close when I saw the same old anti-abortion billboard: a photo of some four-year-old forever stuck in the late nineties with her neon sweater and ribboned hair with abortion kills children scrawled across her. Thirty seconds later, I was passing Wayoata’s welcome sign. wayoata: home of the corn and apple festival produced the usual knot in my throat. Just seeing it made me feel sticky and heavy. Someone had spray-painted an “S” in front of “Corn,” and the smiling cartoon corn below had been given a penis tip shooting three ejaculating dashes onto the heavily lashed apple. It said something about the town that the welcome sign was always in some state of defacement while the antiabortion sign remained unscathed.

Then came the two competing gas stations lit up like casinos. The houses got closer together. Labyrinthine residential streets followed; the backyards offered views of rusted grain elevators, and the roads looped around and back out to Main Street to avoid dead end signs; no one wanted to look out their window and see a dead end. A number of storefront businesses had shut down. Wayoata was too far northeast to have benefited from the state’s Bakken oil boom, and so, like at prom, where one side of the gym was full of ugly girls who wouldn’t put out, all the able-bodied men migrated to the other side, where the getting was good. Faded purple ribbons hung from trees and streetlamps like half-opened gifts. 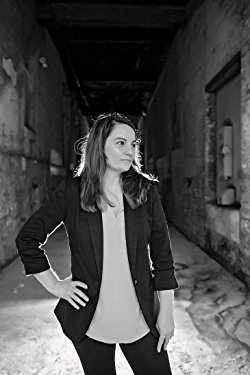 Sherri Smith has previously written two historical fiction novels for Simon & Schuster UK, The Children of Witches and The Virgin’s Tale. When not writing she spends time with her family, two rescue dogs and restores vintage furniture that would otherwise be destined for the dump. She lives in Winnipeg, Canada where the long, cold winters nurture her dark side. Follow Me Down is her first thriller.