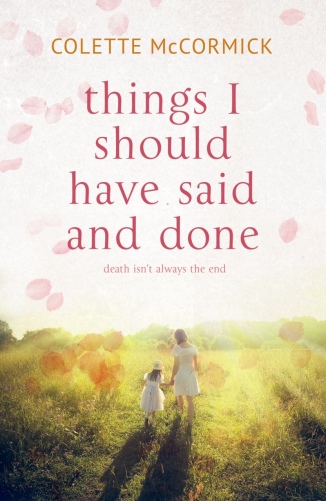 Regular readers of Linda’s Book Bag know I’m full of good intentions when it comes to writing my own novel and less good at actually doing it. Therefore, I’m always fascinated by the process others have gone through. So, I’m delighted to welcome Colette McCormick, author of Things I Should Have Said and Done, today to tell us all about what happened immediately after she got her book deal.

Things I Should Have Said and Done was published by Accent Press on 15th November 2016 and is available for purchase here.

Things I Should Have Said and Done

Ellen never knew what hit her. But when a drunk driver runs a red light her life is over in an instant. Her small daughter survives – and Ellen, hovering in the borderland between life and the afterlife, can only watch as her loved ones try to pick up the pieces without her. Her husband Marc, struggling with being a single parent. Naomi, her little girl, blaming her mother for leaving her. And Ellen’s mother, full of guilt, slowly falling apart. Ellen isn’t ready to let go. She doesn’t want to say goodbye. She is confused, angry and hurting for her family and herself.

And that’s where George comes in. He is her guide through her confusion as she witnesses the devastation among the living. With George at her side Ellen learns that even though she is dead she is not helpless. There are things that she can do from beyond the grave to influence what happens in the world she left behind. But George is new to his ‘job’, and has issues of his own. A working arrangement starts to become something neither of them expects. It is only after death that life can be fully understood.

My goal was to get a book deal and I’d not given a lot of thought to what would happen after I’d secured it. I had absolutely no idea what would need to happen to get my book from the slush pile and onto the shelves.

This is what happened next.

The first thing was that I had to tell the world, well my friends and family anyway. That was actually harder than it sounds because writing is something that I did just for myself so very few people knew that I “wrote” and only one person knew that there was a book that I was trying to place. I got more than one quizzical look, as if they thought I’d been dreaming or drinking but everyone seemed happy for me. I think some of them still think I was talking nonsense though.

In terms of the book however, at first nothing happened, well it did at the publishers but not for me. I sometimes wondered if I had actually imagined it. Now that would have been awkward.

Then, one day, a few months after the contract had been signed I had an email from my editor asking how I felt about a name change. I actually felt fine because I knew it was coming, I knew that the book needed it and by this stage it was all about making the book the best that it could be. I wasn’t about to get precious about a name. So the book that had been Beyond the Light, became Things I Should Have Said and Done.

Several weeks later a “cover treatment,” arrived which, I soon found out, is a mock up of what the book cover would look like. I’d had no idea what to expect and when I saw it I was blown away. It was so pretty, and I have to be honest, I like pretty. I downloaded it onto my phone and looked at it often. This was how my book was going to look and it started to feel very real.

I had something that I could use on social media and so now was the time to start the self promotion that every new writer has to get used to. I have learned that social media, used the right way, can be my friend. I’m still not great at it but I am learning and I think I’m getting better at spreading the word about my book.

So I had a new name, I had a cover and now the hard work was about to start.

I’d never seen anything like the editorial comments before. My editor had gone through the novel and now I had to do the same. I had to go through the novel line by line and either accept or decline every little change that had been made, from a comma to deleting a paragraph. I was amazed what a difference changing a word here or an intonation there could make. I found this the hardest part of the whole process mainly because of the time pressure that was involved. I had a week to get it done and I work full time so my time for editing was limited.  For the first time, writing started to feel like a job and I was relieved when I delivered them on time even though it did mean a 5am start on the Sunday morning.

After the line edits came the proofreading which (thankfully) wasn’t done by me, but I did have to accept it.

By this time I had a publication date and all that was left to do was to wait for that day to arrive and promote the book whenever and wherever I could.

One week before publication day I came home from work to find a parcel and I was beyond excited when I opened it to find my author copies inside. Finally I had my book, yes my book, in my hands.

It was fourteen months between signing the contract and publication day. It was one heck of a ride and I loved every minute of it.

Colette McCormick was born and raised in Sheffield but has made the North East her home for over 30 years. Writing is her love but her job is as a charity shop manager for a leading children’s charity. She has a husband, two sons and a daft dog.

7 thoughts on “What Happened Next, a Guest Post by Colette McCormick, author of Things I Should Have Said and Done”