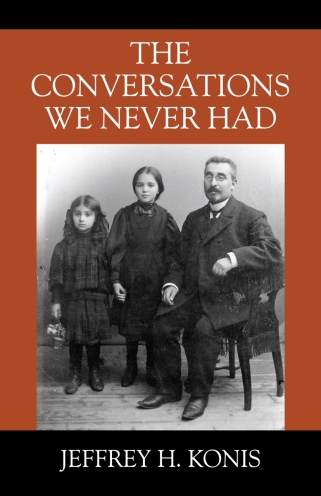 When I was asked if I would like to review The Conversations We Never Had by Jeffrey H. Konis, published by Outskirts Press, I thought it looked a wonderful book. However, my own father had just had an enormous stroke which has, amongst other things, taken away his speech and, it would appear, many of his memories, so that I didn’t feel emotionally up to reading it. I thought it was such an important topic, though, that I wanted to feature The Conversations We Never Had on Linda’s Book Bag so today I have an extract for you and the chance, open internationally, to win an ecopy of the book.

The Conversations We Never Had is available for purchase on your local Amazon site.

The Conversations We Never Had

The Conversations We Never Had, by Jeffrey H. Konis, tells the tale of a grandson who had taken his grandmother for granted, but didn’t realize it until it was too late. It is a memoir / historical fiction novel based on the authors own relationship with his grandmother.

“My father remembers nothing about his real parents. They were dead by the time he was nine. Olga, his mother’s younger sister, not only survived the Holocaust, but was able to find my father at his hiding place – a farm in Poland – and later brought him to America to raise as her own. In all that time, he never asked her any questions about his parents,” says Jeffrey. “Years later, I moved in with Olga for a period of time, but I allowed history to repeat itself – a classic mistake – and failed to ask her the same questions my father avoided. Olga has been gone for more than twenty years, along with everything she could have told me. I am left with a sense of guilt and profound regret, wishing so badly that I could go back and have a second chance to get to know her better and learn more about my family from the only person in the world who knew them and remembered them.”

The Conversations We Never Had is a chronicle of Jeffrey’s time spent with his Grandma “Ola” and an imagining of the stories she might have shared had he only took the time to ask the questions. It is a heartwarming story that will leave you eager to spend time with your family and learn more about them before it’s too late.

An Extract from The Conversations We Never Had

Excerpt from Chapter 2 – Grandma Ola and Me

Over the following days, I found myself picking up the old routine of going to classes, hitting the library, getting a slice or two for dinner, going home and hibernating in my room. Grandma would occasionally check on me, I think more than anything to make sure it was indeed me and not some wayward stranger. I felt bad not spending more time with Grandma the way I had that night when we talked about her dad, but I guess I was too tired after my long days or unsure how to restart the conversation. I knew Grandma was lonely, lonelier with me around than she would have been alone. Then there was something of a break in my schedule. It was the weekend after Thanksgiving and, caught up with all my work, I decided to spend some time with Grandma and talk. Late Saturday afternoon, after the caregiver had left, I approached her.

” I know it’s been awhile but I was wondering whether we could talk some more, if you’re up for it, that is.”

“Up for it? I’ve been ‘up for it’ for the last two weeks. What do you think, that I’ll remember these things forever? You think my memory will get better as I get older?”

“I know, I’m sorry. I’ve been busy with school and . . . .” ”Jeffrey, you barely say hello to me. How many grandmothers do you have anyways? Well?”

Interesting question but, of course, she was right. My maternal grandmother died when my mother was a young girl; I never knew her father, Grandpa Eugene, who died when I was two.

But Grandma Ola said something else that made me stop to think for a second: her memory would surely deteriorate, and in the not-too-distant future. Once that went, so did any chance of learning about my paternal grandparents. There was now a sense of urgency to my mission. Indeed, there were increasing signs that her mind was starting to slip.

The phone had rung, a few nights previously, and I gave Grandma first dibs to pick up the phone to see who it was, as this was pre-caller i.d. The phone kept ringing and I looked in on Grandma, who I knew was lying on the couch in her room. The scene upon which I stumbled was humorous, though it should not have been: there was Grandma, holding a pillow to her ear and talking into it, “Hol-low? Hol-low?” I quickly picked up the phone just as my dad was about to hang up. He often called to check on both of us, to make sure that we hadn’t yet killed each other, that we were still alive.

As willing as Grandma was to have me and as eager and grateful I was to live with her, we each had our own trepidations about this new living arrangement, this uncharted territory in which we were to find ourselves. Grandma Ola had taken in her first new roommate in over forty years. Grandma, I suspect, felt responsible for my well-being. For all she knew, I could be entertaining all sorts of guests and be a constant source of noise and irritation that she had been mercifully spared for so long. I, on the other hand, was moving in with an elderly woman whose mind was on the decline, someone for whose well-being I would be responsible. Not that Grandma expected this of me; then again maybe she did.

She had employed caregivers seven days a week from nine to seven, who would look after her needs, meals, laundry, baths, doctors’ visits, grocery shopping – everything. Grandma, who was a proud, independent woman, and did not wish to argue or appear unreasonable with these good- hearted people, particularly Anna, seemed to accept their help with graciousness and gratitude. Anna may well have a different story to share but this is what I had observed. Above all, Grandma was a realist; she was aware of her own limitations.

What did I add to this equation? Not a whole lot. I did provide Grandma with some psychological comfort in the evenings when I was home. Should some life-threatening event occur, a bad fall for example, I was there to help. My services had been called upon once in this regard, though the fall in question was more humorous than harmful.

I woke up to a yell from Grandma in the middle of one night. My first thought was that she was having a nightmare and ran to her room to check on her, only she wasn’t there. Puzzled, I was on my way to the kitchen but noticed the light was on in the bathroom. I knocked and opened the door a crack. “Grandma, are you in there? Are you okay?” I asked.

She cried that she wasn’t and asked for help. I walked in to find my grandmother stuck in the bathtub on her back from which she was unable to extricate herself. She explained that she had been about to sit on what she thought was the toilet, not realizing her error until it was too late. I scooped her up and carried her back to her bed. I made sure she was indeed okay and wished her goodnight.

I suppose I shouldn’t have found any of this humorous, that this was a sad result of aging, a dreaded process, and that I should have been more compassionate and understanding. True, I suppose, but my understanding under the circumstances consisted of making sure Grandma was all right, carrying her to bed and keeping a straight face through it all. But it was funny. The only thing that wasn’t so funny was that I would be exhausted in my classes the next day owing to my lack of sleep.

As her new roommate, I was also expected to provide Grandma with some company, particularly since she had recently lost her husband. My father, I knew, expected at least this much from me; I didn’t know, on the other hand, what she expected. She likely considered my presence a mixed blessing; I might be nice to have around but also something of an intrusion.

After practicing law for many years, Jeffrey H. Konis left the profession to embark on a career as a high school social studies teacher. His first book, From Courtroom to Classroom: Making a Case for Good Teaching, offers a unique perspective for teachers who seek to inspire their students to learn for the sake of learning.

Jeffrey loves reading, collecting fine art photography, soccer – especially Liverpool F.C. – travel, and his family most of all. He currently resides in Goshen, New York with his wife, Pamela, and sons, Alexander and Marc.

Enter to win an e-copy of The Conversations We Never Had by clicking here.

11 thoughts on “Spotlight on The Conversations We Never Had by Jeffrey H. Konis”