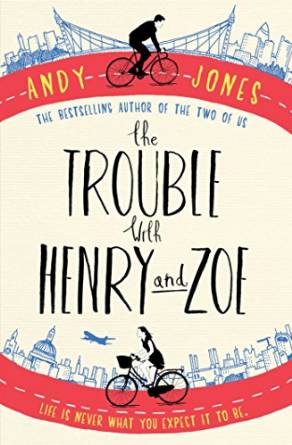 My enormous thanks to Jamie Criswell at Simon and Schuster for an advanced reader copy of The Trouble with Henry and Zoe by Andy Jones in return for an honest review. The Trouble with Henry and Zoe is published by Simon and Schuster today, 28th July 2016, and is available in e-book and paperback from Amazon, Waterstones, W H Smith and other online retailers like B&N.

The Trouble with Henry and Zoe

Henry and Zoe have more in common than they realise. For a start, they both have pasts they’d rather leave behind.

After jilting his childhood sweetheart on the eve of their wedding, Henry makes a break for London. He has no friends, no job, no home, no plan.

Zoe has great friends, two jobs, a new house, and a big scary plan. After a traumatic, life-changing event, she plans to leave London and spend a year travelling. Alone.

If Henry and Zoe had met one year ago, things might have worked out differently. But that is not the way life works. They meet seven months after their worlds have been turned upside down. And four months before Zoe is due to climb on a plane…

My Review of The Trouble with Henry and Zoe

Henry has cold feet on the eve of his wedding to Alice. Zoe isn’t entirely sure Alex is the one she wants to spend the rest of her life with. When Henry and Zoe’s paths cross, life has taken a different route to the one they might have imagined.

I thought The Trouble with Henry and Zoe was just glorious. It is perfectly observed and so refreshing in style. I loved the way chapter headings reflected the chapter content – not least because they made me think. I didn’t always agree that the chapter heading was where I would have placed the emphasis of the narrative and this made for a really satisfying read as I mulled the importance given to particular phrases or words. I felt it lifted the quality of the reading experience for me from just a light read to one of real quality and depth.

I really enjoyed having a male perspective in what is essentially a romantic novel. The balance between Henry’s viewpoint and Zoe’s was perfect. I found their characters to be fully rounded and human and I thought they were both endearing. The supporting cast of characters is also brilliant and I use the word cast deliberately as I feel The Trouble with Henry and Zoe would make a terrific film, especially with the wonderfully naturalistic dialogue already in place. Indeed, there are clever references to film throughout the story.

The cyclical elements of the plot are very well crafted so that it feels as if the story is building on firm foundations that the reader can believe in completely. I found myself laughing and crying in equal measure and thought the emails peppered throughout the book were utterly heartbreaking although I can’t say more without spoiling the plot.

Once I’d finished reading The Trouble with Henry and Zoe I simply wanted to go back to the beginning and read it all again. It would make an ideal summer book.