I have a brilliantly though-provoking guest post from Ariella Cohen all about memory and identity. 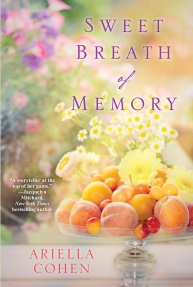 Life is in the telling.

With its tree-lined streets, vibrant downtown and curbside planters of spring bulbs, Amberley, Massachusetts, seems a good place for Cate Saunders to start over. It’s been two years since her husband, John, was killed in Iraq and life has been a struggle. Her new job as a caregiver doesn’t pay much, but the locals are welcoming. In fact, Cate has barely unpacked before she’s drawn–reluctantly at first–into a circle of friends.

There’s diner-owner Gaby, who nourishes her customers’ spirits as well as their bodies; feisty Beatrice, who kept the town going when its men marched off to WWII; wise-cracking MaryLou, as formidable as Fort Knox but with the same heart of gold; and, Sheila, whose Italian grocery is the soul of the place. As Amberley reveals itself to be a town shaped by war, Cate encounters another kindred spirit–a Holocaust survivor with whom she feels a deep connection. When revelations about John’s death threaten Cate’s newfound peace of mind, these sisters-in-arms’ stories show her an unexpected way forward. And Cate comes to understand that although we suffer loss alone, we heal by sharing our most treasured memories.

The Mutable Quality of Memory

War widow Cate Saunders, the protagonist in Sweet Breath of Memory, struggles to keep the life she lost in the forefront of her mind.  Although it has been only two years since the death of her husband, some memories remained as crisp as a new apple, others seemed as fragile as a moth’s wing – as fleeting as frost on a windowpane.  The mutable quality of memory takes Cate by surprise and she concludes that if memories of her beloved dim with each dawn, she is somehow to blame.  Her love must be flawed or her commitment lacking.

Nothing could be further from the truth.

What and how we remember isn’t a choice; if it were, we would mentally delete horrible experiences and underscore pleasant ones.  We would sort the past, preserving some bits in a treasure box and shredding others.  But such editing is impossible because memories answer only to themselves.  Some are as fluid as water; the harder we try to grasp them, the more they seem to slip away.  Others distort with perspective or become sepia-toned, abrading with age but not in the traditional sense.  Mum used to say that memories don’t respect the quarter turn of Nature’s seasons because their frosts and thaws can’t be predicted.  That’s true, for the one constant is how often unbidden memories push forward, claiming center stage one day only to wait in the wings the next.  And yet–

Memories define us; if they’re changeable, then so is identity.  Cate acknowledges this cruel fact when she realizes that the married woman she was is lost to her forever.  She will never be that Cate again, and every step she takes toward remaking herself carries her away from the woman her husband loved.  The life they shared.  The children she might have had.

I chose to have Cate confront the nature of memory because I think many of us react as she does when we forget – whether it’s an upcoming birthday or something truly treasured.  But why are we so hard on ourselves?  Our mind’s filing system is a mystery and if the attic of our thoughts becomes a jumble, we’re not to blame.  An experience may be spotlighted one day only to be cast into the shadows the next.  It is a process beyond our control; beyond understanding.  And yet–

Even tattered memories are armor.  Initially so shiny they dazzle, in time they acquire the patina of use but are no less a shield against loneliness and despair.  Cate comes to understand this and celebrate what memories are left her.  In the act of piecing them together, like the remnant woman she is, she begins to find peace of mind.  And she’s able to forgive herself.

A native of Bergen County, New Jersey, Ariella lives in New England but her dream self resides in County Mayo, Ireland.  The daughter of a school teacher/librarian, she doesn’t remember learning to read, only the frustration when her older siblings could and she couldn’t.

Ariella graduated with honors from Barnard College, Columbia University, and attended the Hebrew University in Jerusalem as a Visiting Scholar.  Her three years in that city were magical.  She holds a J.D. from the University of Michigan Law School where she served as Associate Editor of both The Journal of International Law and Comparative Studies in Society and History.  She spent more than a decade working  in NYC – as a senior manager at the New York Public Library, Yeshiva University and Columbia University’s School of the Arts – before completing her law degree.  After practicing in New York and New Jersey, she now focuses full-time on her writing and her family.