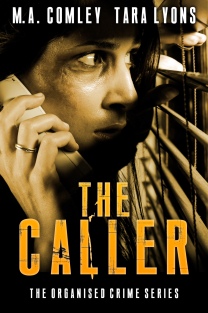 I’m thrilled to be part of the launch celebrations for The Caller by M.A Comley and Tara Lyons, because they are both such talented writers individually so a collaboration is twice the success. I have been fortunate to ‘meet’ Mel and Tara via The Book Club on Facebook.

The Caller was released on 16th June 2016 and is available on Amazon UK and Amazon US. The Caller is the first gripping book in The Organised Crime Team series by NY Times bestselling author of the Justice series, M A Comley and co-author Tara Lyons, author of In The Shadows.

You’ll find the Justice series here and In the Shadows here.

When The Caller rings… what would you do?

The Organised Crime Team is a newly-formed unit with one of the toughest tasks in London. Led by DI Angie North, their first investigation is a cold case that has foxed several officers in the Met for months.

After Angie holds a TV appeal regarding the case, a number of similar aggressive attacks are brought to her attention. The team call on their contacts on the street for help. Their interest is sparked when several local names surface.

To bring the criminals to justice a member of the Organised Crime Team is asked to risk their life in a dangerous covert operation.

To celebrate the publication of The Caller I asked M.A Comely and Tara Lyons which three people they would like to call. This is what they told me:

My Review of The Caller

When women are attacked in their own home in broad daylight, newly promoted Angie North’s Organised Crime Team need to act fast.

I wasn’t entirely certain whether I would enjoy The Caller as the opening is quite violent and aggressive, but the pace was so fast that I didn’t have time to think and I was instantly drawn into the world of organised crime so effectively depicted. I really enjoyed the read.

The Caller is an exciting and captivating book that draws the reader into the corrupt and violent world of Brixton and its environs. What I found so interesting is that this world could be replicated all over the country.

As this is the first in a new series, there’s quite a bit of establishing new characters that I thought was deftly handled and the narrative ending leads brilliantly into the next book. I thought the pace was incredible, with events piling on top of one another at break neck speed so that The Caller was a thrilling read. I was also fascinated by the effect of the collaborative writing and found it seamless – I certainly couldn’t distinguish which elements had been written predominantly by which author. This partnership is obviously going to be an explosive one.

I thought the dialogue was highly realistic so that I believed what characters were saying and I loved the way chapters were short to maintain the pace and ended with mini-cliffhangers so that the reader is compelled to read on. The only aspect I would have liked done differently would have been to have slightly more description of the settings so that I had a clearer picture in my mind’s eye of Brixton, Angie’s home and some of the crime scenes, but I think that’s inevitable when establishing such a highly character and plot driven thriller at the start of what is bound to be a highly successful series.

Aside from the pacy plot, I really liked the portrayal of Angie as she is very human and realistic. She made a refreshing change from the curmudgeonly and bitter male characters of so much crime fiction. I also appreciated understanding how the foul Tyler’s character came about because of his background. Reading The Caller gave me more empathy with him than I would have expected. I wonder whether Mel’s experience of writing romance as well as crime has helped to temper this aspect so that we have more humane and believable characters.

I also thought The Caller had a serious message as well as being a cracking story. I’m not sure I would have thought twice about someone ringing to check about a delivery before reading this. I will now!

The Caller is a great story, full of excitement and action. I can’t wait for the next one!

About Mel and Tara 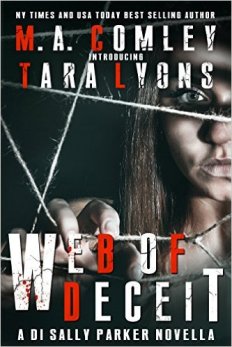 Mel and Tara have previously collaborated on a novella Web of Deceit and you can find it here.

You can see more about Mel and Tara and The Caller with these other bloggers: 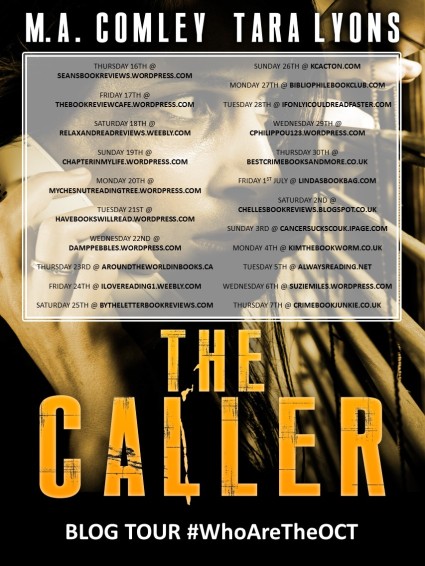 6 thoughts on “The Caller by M.A. Comley and Tara Lyons”