I’m delighted to be featuring another Choc Lit author today, Rhoda Baxter as I ‘know’ Rhoda through the wonderful author and blogger group Book Connectors on Facebook . Please Release Me by Rhoda Baxter was published on 7th June 2016. Please Release Me is out in paperback and can be ordered from all good book stockists. Click here for more information.

Being married to a man with a Ph.D in Chemistry I was fascinated to find out how Rhoda applies science to her writing as she explains in the guest post below. 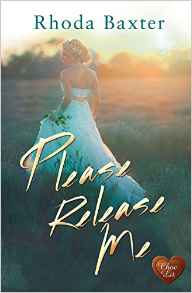 What if you could only watch as your bright future slipped away from you?

Sally Cummings has had it tougher than most but, if nothing else, it’s taught her to grab opportunity with both hands. And, when she stands looking into the eyes of her new husband Peter on her perfect wedding day, it seems her life is finally on the up.

That is until the car crash that puts her in a coma and throws her entire future into question.

In the following months, a small part of Sally’s consciousness begins to return, allowing her to listen in on the world around her – although she has no way to communicate.

The Science of Writing Fiction

I trained as a scientist. I did a DPhil in molecular micro biology and I now work in university technology transfer, which means I get to look at things which are at the cutting edge of science for a large part of my day. At night, like some sort of rubbish anti-superheroine, I sit in bed and write novels. What, you ask, do these two things have in common?

The answer is logic. Things have to make sense. If someone brings me a new invention, I need to be able to follow what’s happening. I may not need to understand why it works (although it helps), but my job is to ask annoying questions until I understand how it works and why it’s new. There are no leaps of faith. Science must make sense. And a novel? Well the same applies. Things must fit together logically. When it comes to coming up with a story, logic is your friend.

Please Release Me started off as a single image of two women sitting on a bench, one was a ghost in a bridal gown, the other was alive, but somehow less noticeable than the ghost. From the way they were sitting, I could tell that they were close, but didn’t totally trust each other. That was all I had.

I sat down and thought about what little I knew. I called the ghost Sally and the live woman Grace. I write romance, so there had to be a man. I called him Peter. Sally was wearing a wedding dress, so she must be married to Peter and killed on their wedding day. I’d never written a book about a ghost before, so I needed some rules on how a ghost would behave in the world. The list looked like this:

I had some scenes in mind where Sally was in Grace’s house. How did she know the house? So Sally’s job became ‘Estate Agent’. Knowing that gave me the ideal opportunity to set up how Sally and Peter met. This allowed other things to slot in too – the fact that Sally had never been to Peter’s office suggested that she didn’t much care about what he did. I needed Peter to realise that Sally had been somewhere he had been certain she hadn’t. This set up the line of conflict to do with Sally’s gambling addiction.

And then there’s ‘what if’? If Peter was a widower, there was no reason why he couldn’t really be with Grace, but what if Sally wasn’t actually dead? What if she was in a coma? This brought me to the hospice setting, which gave me a good, and logical, way for a devoted husband who spent hours sitting at the bedside of his wife, to meet someone else.

Do you play ‘what if’ in science? Of course! It’s the same ‘but what happens if I do this’ that keeps science and innovation going. If we only did what we already do, we’d never do anything new. It’s just a different sort of creativity.

So there you have it. People ask me if I find it hard to switch from scientist mode to novelist mode. I don’t, because it’s the same creative process. It’s only the medium that is different. Although, if you forced me to choose between them, I’d say making stuff up and writing novels in a marginally more fun. I can do that wearing pyjamas, for a start.

As well as being a scientist and a romantic novelist, Rhoda is a member of the British Hedgehog Preservation Society!  For more on Rhoda Baxter, follow her on Twitter, visit her website and find her on Facebook.

2 thoughts on “Guest Post by Rhoda Baxter, author of Please Release Me”