I’m indebted to Laura Nichol at Black and White Publishing for an advanced reader copy of Willow Walk by SJI Holliday in return for an honest review. Willow Walk will be released in paperback by Black and White on 10th June 2016 and is also available in e-book on Amazon and from the publisher. Willow Walk follows SJI Holliday’s debut Black Wood and is the second in the Banktoun trilogy.

When the past catches up, do you run and hide or stand and fight?

When a woman is brutally attacked on a lonely country road by an escaped inmate from a nearby psychiatric hospital, Sergeant Davie Gray must track him down before he strikes again. But Gray is already facing a series of deaths connected to legal highs and a local fairground, as well as dealing with his girlfriend Marie’s bizarre behaviour. As Gray investigates the crimes, he suspects a horrifying link between Marie and the man on the run – but how can he confront her when she’s pushing him away? As a terrified Marie is pulled back into a violent past she thought she’d escaped, she makes an irrevocable decision. And when events come to a head at a house party on Willow Walk, can Gray piece together the puzzle in time to stop the sleepy town of Banktoun being rocked by tragedy once more?

My Review of Willow Walk

Sergeant Davie Gray has an embryonic relationship with Marie Bloomfield but Marie has a past that will come back to haunt her.

I have a confession to make. Black Wood by SJI Holliday has been languishing on my ‘To Be Read’ pile for over a year and I haven’t got round to reading it. Having devoured Willow Walk in day that I simply had to put on hold until I’d finished it, I’ll be digging out Black Wood immediately. I’m sure there are Banktoun nuances I’ve missed by not having read Black Wood, but Willow Walk is fantastic as a stand alone book.

By the end of the prologue my heart was racing and it didn’t slow down until well after I’d read the last word. This is thriller writing at its best. It’s taut, pacy and heart-thumpingly good. What is so effective is what isn’t said as well as what is. SJI Holliday knows exactly how to build suspense by drip-feeding information so that the reader’s imagination runs riot. I found the build up sinister and I was unnerved by the letters from Graeme that intersperse the narrative, bringing him into sharp focus. 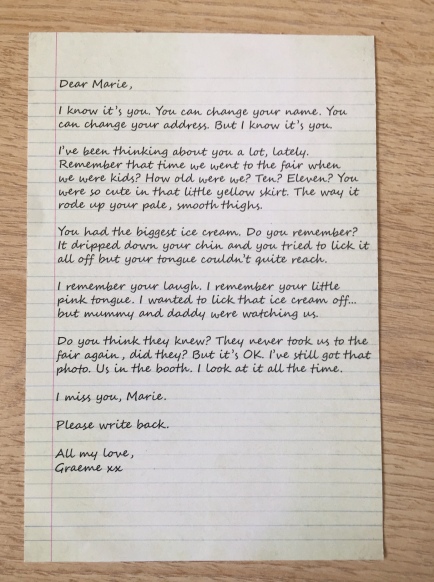 I found the tightly knit community of Banktoun as claustrophobic as Marie’s habit of holding her breath under water when she goes swimming. What also held my attention so effectively is that Davie Gray isn’t a policeman with deep psychological issues of his own as in so many crime based novels and this made Willow Walk a refreshing and captivating story for me.  There’s quite a range of characters but they are all skilfully linked either through the main or sub-plot which weave in and out and complement one another perfectly.

Willow Walk also made me think as much as it entertained me. Love is explored in all its passions and frailties so that I was left questioning whether I felt repulsion or sorrow for Graeme. Similarly, I felt almost guilty about the way our society deals with the production, distribution and use of legal (or herbal) highs, how we treat those with a range of mental health issues, how our institutions succeed or fail because of the integrity of their staff. There’s so much in this novel that I think it will repay several reads and there will always be more to uncover. This is such intelligent writing.

Speaking of writing, SJI Holliday’s narrative style is incredible. Her dialogue is natural and the range of sentences give tension and atmosphere. She can pivot the whole plot on a couple of words. Stunning stuff.

Willow Walk is just how I like my crime fiction – the psychological elements far outweigh the police procedural ones so that I feel as tainted by the criminals as those in the book who come into contact with them. I can’t recommend Willow Walk highly enough.