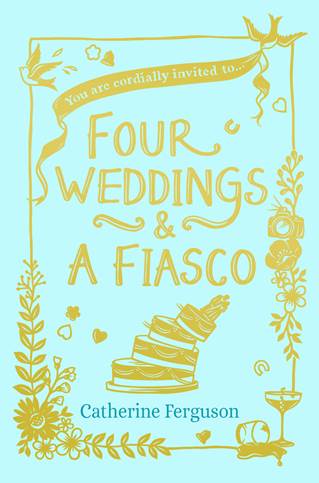 I recently took part in the cover reveal of Four Weddings and a Fiasco by Catherine Ferguson which is published by Avon Books in e-book and paperback on 16th June 2016 There are two lovely covers for the paperback and e-book and I am delighted to have had the opportunity to read it too now. You can order Four Weddings and a Fiasco on Amazon, or directly from Harper Collins.

Four Weddings and a Fiasco 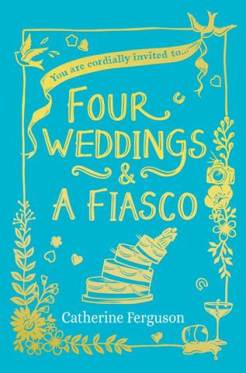 Katy Peacock lives a life as colourful as her name.

As a wedding photographer, she spends her days making other people smile as she captures all sorts of fun and capers at celebrations that range from the wacky to the wild.

But her own life isn’t looking quite so rosy. Her mum is acting out of character, her menacing ex is back on the scene, and she is torn between two gorgeous men. And that’s before we even get started on the trouble her sister is causing . . .

As Katy weathers the ups and downs of the season, she revisits problems from the past, discovers new friendships and finds that four weddings and a fiasco have the power to change her world beyond measure.

A funny, feel-good read, perfect for fans of Lucy Diamond and Jenny Colgan.

My Review of Four Weddings and a Fiasco

Katy Peacock is struggling. After a major fall out with her sister, she is finding her debts are mounting, her wedding photography business is demanding and her ex-boyfriend Dominic is threatening.

I have a confession. I did not like the title Four Weddings and a Fiasco and probably would not have read it had I not received it for review. Had that been the case I would have missed out on a lovely entertaining story that brought me considerable pleasure.

I thoroughly enjoyed Four Weddings and a Fiasco, partly because I’ve worked as a wedding photographer and Catherine Ferguson’s portrayal is absolutely perfect so that I could really relate to the scenarios presented.

I thought the characterisation was super. Whilst typical of this chick-lit genre, there is sufficient variety of personality to give a warm, humane and realistic cast. Katy is especially well depicted and I thought she came across as the kind of person any reader could relate to.

The plot is carefully and satisfyingly constructed with the iterative theme of weddings acting as a cohesive force that works brilliantly. There’s an underlying mystery that gives depth too, as the reader tries to work out just what did happen between Katy and her sister Sienna.

Alongside the complications of romance you’d expect from this genre, there are other themes presented to make the reader think – grief, betrayal, family, deception in many forms – so that even the most chick-lit averse reader can enjoy Four Weddings and a Fiasco as an intelligent and absorbing narrative.

I thought Four Weddings and a Fiasco was brilliantly entertaining, well written and perfect for a beach read or a cosy winter’s afternoon. I will be looking out for more from Catherine Ferguson as her style is effortless to read, engaging and thoroughly lovely.

15 thoughts on “Four Weddings and a Fiasco by Catherine Ferguson”