My grateful thanks to the author Russell Mardell who sent me a copy of Cold Calling in return for an honest review. Cold Calling is published by Troubador in paperback and e-book and is available for purchase on Amazon, Troubador, Waterstones and WH Smith. Readers might like to know that the Kindle version of Cold Calling is only 99p until Thursday 2nd June.

I so enjoyed reading Cold Calling that I had questions that Russell agreed to answer and you can see his responses after my review.

Still reeling from the break-up with the love of his life, insurance firm cold-caller Ray English has become a bit of a screw up. Cynical and withdrawn, Ray is aimlessly drifting through life in London with his long suffering best friend, Danny.

However, once he is asked to reform his college band for a friend’s wedding, Ray is soon forced to face up to his old life, and the hometown he had tried so hard to turn his back on.

Anya Belmont is a woman with a secret and a history that continues to shape her life. A coffee shop owner in Salisbury, Anya is successful, yet bored; married, yet lonely. She is also slowly being driven to distraction by her highly temperamental friend, the child-hating children’s author, Eva Cunningham.

Through fate, coincidence or just bad timing, Ray and Anya’s lives begin to change when Ray cold-calls Anya and the two strike up a seemingly innocuous conversation. Against their better judgement, their conversation is soon the start of a relationship played out over the phone.

But can there ever be anything real in a phone call? A sharp-witted, saccharine-free, thoroughly modern tale of lost loves and found friendships.

My Review of Cold Calling

There is a depth to Russell Mardell’s writing that surprised me. Whilst the story is akin to many other multi-perspective narratives based on the difficulty of relationships, Russell Mardell manages to provide a distinct, literary style with human and convincing characters that come across as real people.

Although all four perspectives are told in the first person, the voices are so clear and well balanced that each is definitely a believable character. Eva evoked the desire in me to shake her hard and, perhaps wrongly and saying something about my own personality, I hoped she would get her comeuppance until the very end of the novel when my attitude softened towards her.

I really cared for Ray, Anya and Danny, finding I identified with elements of all of them. The secondary characters play a vital role in developing Ray et al too. They also give layers to the themes that weave in and out of the narrative.

I thought the way the settings were described gave a perfect amount of detail so that I could picture the scenes vividly, especially when described through Ray’s eyes. The writing has humour and wit as well as thought-provoking themes and dialogues that really made me think. I also found the issues presented interesting and absorbing – just how do we deal with end of life care for the elderly with dementia? How many of us do settle for good enough rather than chasing our dreams? How many of us cling to the past at the expense of the present?

What I also found highly effective is that we never really know what Anya and Ray look like. This cleverly underpins the fact that their relationship is conducted over the phone rather than in person so that the reader can use their own imagination. I like the conceit of Eva’s thoughts about being a writer too and her concern that, once in the box of children’s author, she’ll never be able to escape. Russell Mardell obviously thoroughly understand the writer’s angst!

The plot is tightly structured so that there is a satisfying ending that enhances the quality of the novel further. This not all about happy ever after but is more about truth, realism and identifiable feelings that I could relate to and understand, giving me real pleasure in the reading.

I really enjoyed Cold Calling. I thought it was extremely well written, entertaining and interesting and I will be looking out for more from Russell Mardell.

Thanks for agreeing to answer the questions I had as a result of reading and enjoying Cold Calling, Russell.

The dedication is to your Mum because she wanted you to write something a bit nicer. Was she satisfied with Cold Calling?

She was! It’s funny, it has become a little bit of an in-joke between us over the years, as much as she has enjoyed my previous, darker, books, she has always said ‘can’t you write something a little bit nicer?’ Though I should say that is not something she says just because of her own preferences, it was always more a case of her thinking a nicer book would sell better. We will have to see if mother knows best!

Adding the additional words in the dedication also allowed me to subtly suggest to people that enjoyed Cold Calling, that should they wish to have a read of my backlist, they would be reading very different sorts of books. I felt that was important too.

I’ll be one of those readers checking out your backlist too, but if readers want to see for themselves they can look here.

Music underlines a couple of key scenes. How important a role does music play in your own life?

Hugely. I am a complete music geek; in fact if music shops still existed in my hometown, I would probably be hounding them for a job. I dearly wish I had even a tiny fraction of musical talent, but I proved with some long ago guitar lessons that wasn’t the case. I always write to music, I can’t stand silence when I’m working. Though it is very important to get the right sort of music to fit the right sort of writing – I probably put too much thought into it! A lot of the bands mentioned I am very fond of, naturally, and I was very fortunate to be allowed to use lyric quotes from one of my favourites, Augustines.

Although Cold Calling is a relatively light read, you also explore some important issues, such as how we deal with elderly dementia sufferers. How did this theme arise? Did you intend to provoke debate in the reader’s mind or did you intend to show another facet to Ray’s character?

I’m always a little wary of covering such subjects, and in fact, in the first draft that storyline was left out. You have a responsibility when you cover such things, and I didn’t want it to ever appear like I was trying a cheap manipulation of the reader. But it became obvious that we needed to see another side of Ray. So much of his story is his struggle to move on from a broken heart. To see a character that can slip into self-indulgence, do something so automatic and unquestioning out of duty and out of love, like caring for an elderly relative, was an important contrast to make.

(And it works brilliantly – hence my question!)

It is an issue that has affected my family, which again made me think twice about going there. But I’m glad I included it, it is only a small part of the story, but a very important one, I think.

I found the four main characters completely convincing. How did you plan for Ray, Danny, Eva and Anna? Did you complete full character profiles, use visual stimuli, or some other system?

I wish I could say that I planned them out extensively. I’ve never written a character profile, I’m not sure I ever could. There are parts of me in all of them, I suppose (though in some cases wildly exaggerated, I should add!) I don’t like doing too much before I start writing, and I very rarely do treatments. It’s not a perfect way of working by any means but I do like the element of surprise when you are writing, to let events and characters be free enough to take you somewhere you didn’t know they needed to go. I always start with basic outlines for characters and events. More often than not, a beginning and an end, but I like the journey I take to get them there to be open to new ideas. The idea of having things planned out before, I think, I would find too constricting and would make the process slightly dull. You only get to know your characters when you are writing, so sometimes they change, and you need to be free enough to let the writing dictate, not the planning.

That said, Cold Calling was originally a film script, many years ago so I have lived with these characters for a while. They have changed a bit since then, but starting this novel I knew them better than any other characters I’ve written.

Are there plans to explore the lives of these four people in a future book?

Maybe. I haven’t any plans at the moment, but I do like them and wouldn’t mind writing for them again. I’m not sure it would ever be a direct sequel though. Often with my books there are character or location crossovers, little things that regular readers might pick up on, so we may meet them again, but only as supporting characters. In fact the book I am writing at the moment may have a few nods and winks to Cold Calling. There will certainly be similar locations, so you never know, they may find there way into this story too.

I do hope so – I’d like to know more about them! Thanks so much for responding to my questions Russell.

Russell is a novelist, playwright, producer and sometime director based in the south west of England.

His first published book was Silent Bombs Falling on Green Grass a collection of twelve weird and wonderful short stories centered around the town of Mewlish Lull. His follow up Stone Bleeding is a dark dystopian satire of reality TV and celebrity culture. More recently he has published Bleeker Hill a dystopian horror, as well as its sequel, Darkshines Seven. His latest novel is the comedy, Cold Calling. 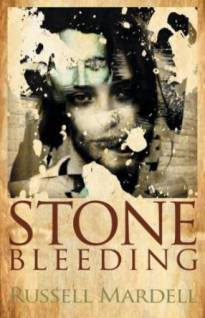 All of Russell’s novels can be found for purchase here.

Russell has also written for the British stage with the plays Cool Blokes: Decent Suits, and its sequel Suits 2: Back From the Cleaners performed at the Salisbury Playhouse, and The Seventeenth Valentine and Freestate playing at The White Bear Theatre in London.

Having studied film production in London he has written and directed a couple of short films, and continues to develop a number of screenplays.

A music obsessive and film geek, he drinks too much caffeine and still, despite being given many reasons not to, retains a lifelong passion for Everton football club.

You can find out more about Russell Mardell by following him on Twitter, finding him on Facebook and visiting his blog.