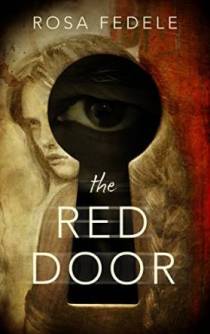 It gives me great pleasure to bring you a book with a difference today. The Red Door by Rosa Fedele was published on 1st October 2015 by MoshPit Publishing and as well as being a crime thriller, it is beautifully illustrated too. The Red Door is available on Amazon UK and Amazon US. I have a fascinating guest post from Rosa Fedele linking writing and art that I think will appeal to readers and artists alike.

About The Red Door

What would you do if you began to suspect one of your tenants could be the perpetrator of a vicious double murder committed over thirty years ago?

It is 1983 and the new owner of the beautiful old Sydney mansion ‘Rosalind’ begins to believe she is being watched by the mysterious resident in Number Three, a reclusive man who happens to share his name with two teenage sisters, victims of a sinister and brutal murder. Her peace of mind slowly erodes as a fascination for the crime becomes obsession – consuming her life, shaking relationships with her new found friends and leaving a trail of devastation.

From Artist to Writer

The first reaction I encountered at the announcement of my first novel was: “Why? Why ever did you decide to write a book?” The question is usually accompanied, even now, by the scratching of heads, and incredulous or uncomprehending looks.

Well, really, is it such a leap from creating pictures with a pencil or brush, to conveying images with words?

“But, is this something you’ve always wanted to do?” they persist.

Funnily enough, when first I started to write, I had no idea what I was doing. In fact, I was so embarrassed that I started the project in secret, waiting until the house was empty and I was sure to be completely alone.

But, quite simply, yes. I have always known I would write and illustrate my own books; it was a natural progression. I grew up on a rich diet of illustrated stories – the works of C.S. Lewis, Tolkien, Beverley Nichols, Hauff’s Fairy Tales, E.C. Pedley’s Dot and The Kangaroo and this – newly rediscovered during our recent move – Norman Lindsay’s “The Flyaway Highway”. Lindsay, a master of portraiture not well-known outside our country, had a wonderfully silly side, unapologetically writing his own jolly and deliciously nonsensical stories, generously laced with illustrations and innuendo.

See how disrespectful I was as a child, wantonly defacing this lovely old book by colouring in Norman’s drawings! 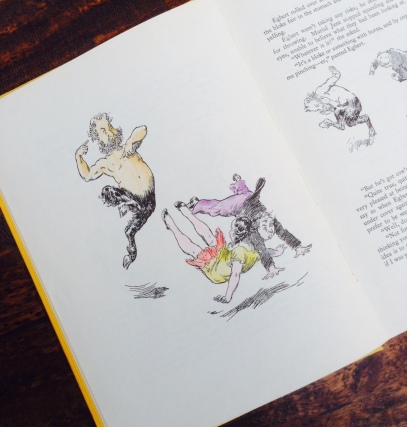 Now, the thing is: I love old houses. A lot.

Sometimes my heart aches profoundly at the sheer beauty of a building and I will stop and stare dumbly at the shimmering tarnished Gothic copper roof of a turret, the sun flashing off stained glass windows or the swirling ochres and russets of a Sydney sandstone wall, wishing desperately for the owner to appear at the door, smile and welcome me in for tea and biscuits.

One day, I was strolling through Glebe (one of the oldest suburbs in Sydney), admiring the old mansions, and I happened upon one house in particular. But it was more than a house; the magnificent old building riveted and mesmerised me and in the following weeks I was drawn back to the site over and over. The mansion is fronted by a brightly painted door, a glossy façade, and I imagined what the door might mask and what it could have concealed over the last 150 years: nasty, shameful secrets, possibly a poor family’s misfortune and tragedy, rotten crimes and heaven knows what other unholy messes … and a story began to form.

I researched the origins of the house. I drafted thumbnail sketches of my main protagonist and her beautiful new home and, slowly, she came to life. Very soon, I was hosting a whole colony of characters in my head. 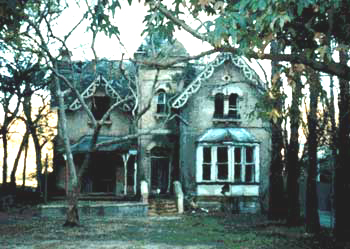 Set in 1983, The Red Door is about the new owner of an old Sydney mansion ‘Rosalind’, who begins to believe she is being watched by one of her tenants, the mysterious resident in Number Three, a reclusive man who happens to share his name with two teenage sisters, victims of a sinister and brutal murder which took place in the 50’s. Her peace of mind slowly erodes as a fascination with the unsolved crime becomes obsession – consuming her life, shaking relationships with her newfound friends and leaving a trail of devastation.

As the story unfolded, I’d paint a picture to illustrate exactly what the chair in Beadles’ window looked like or how the iconic old Balmain Garage used to look before developers tore it down. 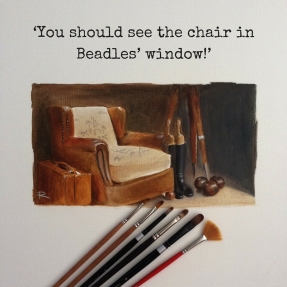 A reviewer recently said of The Red Door “… I found the observational style reminiscent of Henry James’ novels – fine detail and expertly written dialogue …” After I collected myself up off the floor and back into my chair, I thought: Wow! I’m glad I was able to successfully convey the language and landscape of inner city Sydney with words because, quite frankly, it’s far easier to turn to a No. 10 Filbert and a tube of paint when I’m struggling with commas, clichés and characterisation!

Does it help to observe with an artist’s eye? I think so. We are taught not just to look, but to see. Just as Amsterdam has its own pearly and intimate light, perfectly captured by Vermeer and de Hooch, and the English countryside its own gentle grey-blue drifting clouds, so masterfully interpreted by Constable, Sydney has a particular atmosphere of its own. The sky’s blue is so startling it can burn retinas, the edge of every leaf is knife-sharp, the heat can singe nostril hair and our birds don’t twitter or chirp – they screech.

I suppose having a portraitist’s eye also helps: I watch how people integrate with their environment and each other, the inter-personal dynamics, mannerisms, the tilt of a head, a finger rubbed nervously across a philtrum. Another peculiar thing: characters will take on a life of their own – just when you’ve got the plot sorted, the little buggers wander off and do anything they bloody please! Halfway through the story, my main girl’s behaviour was infuriating me. So, I tore up all the old sketches and painted her as I preferred her – a no-nonsense woman with tenacity and resilience – and slowly she started to come around and see it my way … 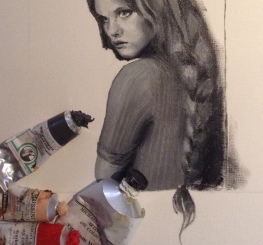 It was a joy to write and illustrate The Red Door. Readers who also love the pictures can easily hop online and order their very own limited edition print or giclée.

Yes, there’s a sequel. Yes, it’s again based around an old house in Sydney. No, I won’t tell you much more, but here’s how I’m developing one of the characters on canvas: 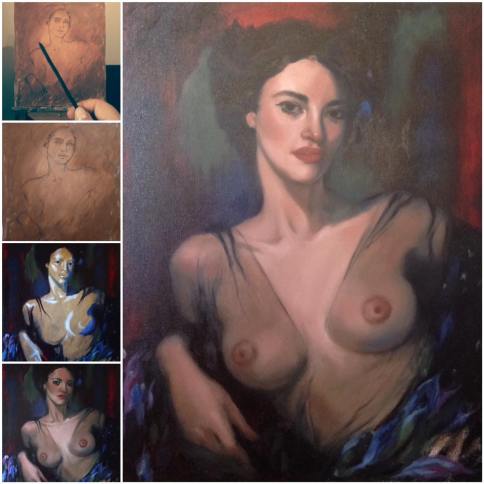 I certainly hope one day someone will love my books well enough to handle them until dog-eared and tattered, or gleefully take to the illustrations with a packet of coloured Derwents.

And, lovely readers, if you ever see me lurking in front of your beautiful old mansion, please do invite me in for tea.

We certainly will Rosa!

‘For me, every painting and every book is a new adventure, started with a thrill of excitement and anticipation.’

Australian painter Rosa Fedele, known for her portrait and figurative work, was born in Sydney and studied at the prestigious Julian Ashton Art School. A member of Portrait Artists Australia, Australia’s largest industry association for professional portraitists, and a regular contributor to Australian Fine Art and Decorative Painting magazine, her work has been exhibited in NSW Parliament House and Parliament House Canberra, as well as numerous galleries and exhibitions in Australia and worldwide.

Rosa fell avidly in love with books at a very young age. Her favourites were those by C.S. Lewis and Tolkien, and later on Raymond E. Feist, David Eddings, Anne McCaffrey and Frank Herbert; in fact, anything with beautiful and spellbinding words and imagery that would allow her to escape into other worlds.

Her debut novel The Red Door is a fulfilment of her lifelong dream, to interweave a story with pictures … and draw the reader into her own bewitching, and slightly dark-edged, world.

You can follow Rosa on Twitter and if you’d like to order your very own limited edition print or giclée, see Rosa’s web site for more details.

7 thoughts on “The Red Door by Rosa Fedele”