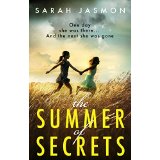 In the summer of 1983, 16 year old Helen’s world is suddenly injected with life and friendship as the Dover family move in near by. But all is not as idyllic as it may first appear and the events and secrets of that summer reverberate for 30 years.

I found it hard to believe that this is a debut novel, so assured and atmospheric is Sarah Jasmon’s writing. The style is mesmerising, encapsulating perfectly, through Helen, the feeling of being an outsider and never quite belonging. There is an underlying tension and wistfulness that draws in the reader. Helen experiences burgeoning sexuality, loneliness, love, and rejection. I think I felt every emotion as Helen, rather than with her, as her deep need to be accepted was conveyed so beautifully. I thought Helen was a kind of Everywoman in whom we can all find traces of ourselves.

I also thought the structure was perfect. Helen’s first person narrative set in 2013 is given through the prism of memory, secrets and denial so that the reveal at the end of the novel is all the more affecting. Using the third person to convey what happened in the past of 1983 is a stroke of genius. It is as if Helen is trying to distance herself whilst relentlessly replaying her life in her head and almost telling herself the story, rather than the reader following a plot. But Helen refuses to acknowledge the biggest secret of all – her own.

The quality of writing, the sense of atmosphere and the underlying emotion make Sarah Jasmon’s ‘The Summer of Secrets’ a novel that will stay with me for a very long time. I cannot recommend it highly enough.

One thought on “The Summer of Secrets by Sarah Jasmon”