Many thanks to Hannah Robinson at Quercus books for providing a copy of Amy Snow by Tracy Rees in return for and honest review. Amy Snow was published on 9th April 2015 and became a Richard and Judy Best Seller. Amy Snow is available for purchase here and from Quercus. 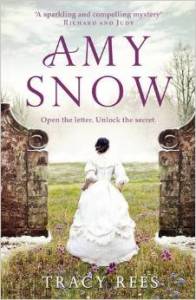 Abandoned on a bank of snow as a baby, Amy is taken in at nearby Hatville Court. But the masters and servants of the grand estate prove cold and unwelcoming. Amy’s only friend and ally is the sparkling young heiress Aurelia Vennaway. So when Aurelia tragically dies young, Amy is devastated. But Aurelia leaves Amy one last gift. A bundle of letters with a coded key. A treasure hunt that only Amy can follow. A life-changing discovery awaits . . . if only she can unlock the secret.

Amy Snow is so named after being found in the snow as a baby by wealthy heiress Aurelia Vennaway. Aurelia’s stubborn persistence forces her parents to take in this foundling as long as they do not have to encounter her. When Aurelia dies as a young woman, Amy is ejected from the house and so begins a letter based treasure hunt set for Amy by Aurelia.

‘Amy Snow’ is a thoroughly deserving winner of the first ‘Richard and Judy Search for a Bestseller’.

My Review of Amy Snow

From the first word of the Prologue to the final word off the Epilogue this book holds the reader’s attention. As I read it I thought what a fabulous BBC period drama series it would make. Short chapters race along and there are mini cliffhangers and twists and turns in Amy’s journeys that have been so well constructed and written that it is as if you are travelling with her as you read. I really appreciated the variety of construction with a range of sentence lengths that fit the different situations perfectly.

One of the great strengths of this novel is the creation of character. None is perfect, from Amy and Aurelia to Mrs Riverthorpe and Lady Vennaway, which makes them totally realistic and appealing. Amy herself is often stubborn or naive and frequently behaves in a manner with which I could fully empathise.

There is also subtle humour underlying the narrative, and the use of the first person with entirely realistic dialogue and memory makes Amy’s story vibrant and engaging like listening to that of an old friend.

I really enjoyed ‘Amy Snow’. It was intelligently and vividly written, well researched and realistic whilst managing to be a real page turner. Lovers of historical fiction must read this as soon as possible.