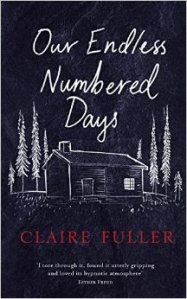 Firstly, an enormous thank you to Tracy Fenton of The Book Club on Facebook (#TBConFB) for supplying me with ‘Our Endless Numbered Days’.

I turned to Claire Fuller’s book after temporarily abandoning another novel I wasn’t enjoying and it was the perfect contrast. Reading ‘Our Endless Numbered Days’ felt like coming home after a long and arduous journey.

The plot is simple; Peggy (or Punzel as she is also known) is taken away by her father to a remote cabin in the woods whilst her famous concert pianist mother is on tour. Peggy’s father tells her that they are the last remaining people alive. The narrative then builds around their life of living from the land.

The book is written in the first person and although it is recounted some eight years after Peggy arrives in the cabin, Fuller manages to convey entirely convincingly the perspective of the child without resorting to contrived childish language. She write so beautifully that it is easy to picture what Peggy sees and to feel her emotions with her. Music is an iterative and cohesive image throughout the novel and Fuller’s writing echoes the swells, stops and refrains of that music causing the reader’s heart to follow the narrative almost against its will. Her writing is a rich tapestry of image, speech, event and emotion. The settings are exquisitely described so that each nuance of temperature, season, nature, weather, water and land can be appreciated fully by the reader. Every emotion is also laid bare. There is great happiness and sadness, love and hatred and considerable madness. The book has a sharply observed but subtly displayed psychological element too.

As I was reading this I really didn’t want it to end, but at the same time I was desperate to know what happened to Peggy as I had become so emotionally drawn in to the book that I really cared about each of its characters.

Occasionally, as a reader, there comes a book I wish I could have written and Claire Fuller’s ‘Our Endless Numbered Days’ is one of them. I can’t recommend it highly enough.

3 thoughts on “Our Endless Numbered Days by Claire Fuller”