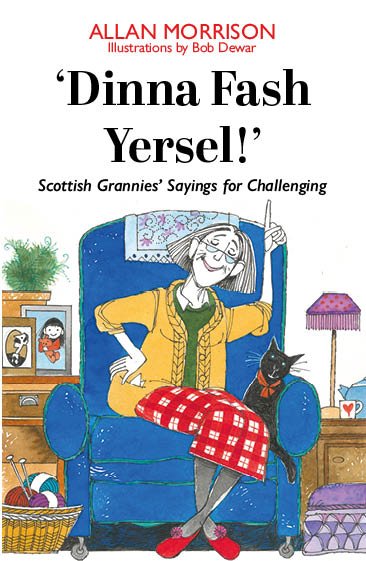 The end of 2022 felt like enormously hard going so I needed a little light relief. My enormous thanks to Gavin at Luath Press for providing it by sending me a copy of Dinna Fash Yersel, Scotland! by Allan Morrison and illustrated by Bob Dewar.

These are tough times.

But Scottish grannies can be an oasis of calm. Their wit and wisdom, their compassion and knowhow, their measured good sense and withering reproaches are exactly what is required.

Scottish grannies are reassuring. They are relevant. And they need to be heard.

An anthology of Scottish grannies’ sayings for challenging times!

Dinna Fash Yersel, Scotland! is enormous fun. Filled with Bob Dewar’s cartoon style images, the pictures alone are enough to raise the spirits as grannies appear in all shapes and sizes and there are small, appropriate images in between each saying.

I found the vernacular spellings created exactly the right tone and I had great fun trying out my Scottish accent reading them aloud. I certainly needed the translations underneath many of them and found it fascinating to see if the translation provided matched what I would have put. Some of them seemed totally accurate and others felt a tongue-in-cheek English received pronunciation approximation of the Scottish. This added to the sense of fun. For example, I loved ‘It’s hangin’ fae ma bottom lip shoutin’ Tarzan’ translated as ‘Find the article yourself’. (And try saying that with a strong Scottish accent – just brilliant). When my Pilates class begins again I am going to use ‘Ah’m fair puckled’ when it all gets a bit too strenuous!

Divided into twelve sections covering everything from love, through health to international tensions, there really is something for every reader here. I read the book through in order but I think it would be even better dipped into at random. Humour aside, I think there’s an underlying pragmatism and appreciation of an older, often overlooked, generation that helps make Dinna Fash Yersel, Scotland! all the better.

I laughed aloud at Dinna Fash Yersel, Scotland!, had to think about some of the meanings and thoroughly the book. Great fun!

Allan Morrison is a prolific author whose previous books include Goanae No Dae That, Last Tram Tae Auchenshuggle, Haud ma Chips Ah’ve Drapped the Wean, Naw First Minister, Haud that Bus and Should’ve Gone Tae Specsavers, Ref! His media appearances include The One Show, The Riverside Show, Out of Doors and Good Morning Scotland. He is involved in charity work and after-dinner speaking, and is a member of his local Rotary club. Allan enjoys hillwalking, sport and travel, and is a keen football supporter. He and his wife live in the west of Scotland, and he is the proud grandfather of four grandchildren.

Bob Dewar was born in Edinburgh at an early age. 16 years later he was published nationally. He worked in D.C. Thomson’s studio where, among other things, he ghosted Dennis the Menace. After going freelance, he did political and social commentary for The Scotsman newspaper. He has illustrated books for the children’s and English Speaking Departments of Oxford University Press, Fife Educational Social Development, A&C Black and many Scottish publishers – Birlinn, Luath, Black & White and Itchy Coo. His work has also appeared in The Times, The Herald, Scottish Field and The Scotch Malt Whisky Society.