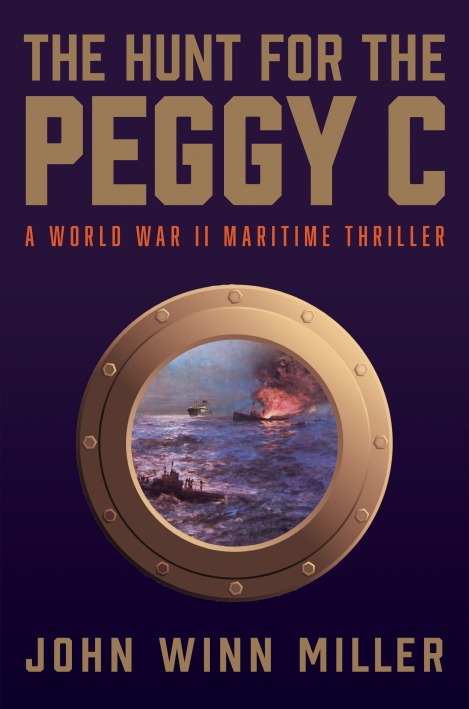 I adore history and as a result am delighted that I get to stay in with John Win Miller today to find out all about his debut novel which I think sounds amazing. Let’s dive right in (and I say dive deliberately!) and find out what he told me:

Staying in with John Winn Miller

Welcome to Linda’s Book Bag John and thank you for agreeing to stay in with me.

Thanks for inviting me in.

I’ve brought The Hunt for the Peggy C, my debut novel, because it is my dream project—literally. Years ago, I had been watching a terrible movie with my daughter Allison (who now plays Maggie on ABC’s A Million Little Things), and I kept telling her, “I know I can write a better script than this.” That night I had a dream. When I awoke the next day, I knew the first scene, the last scene, and the name of the ship. Nothing else.

I had a regular job as a newspaper editor, so I could only work on the screenplay intermittently. When I retired the first time (a.k.a. took a buyout as publisher), I was determined to write the story. I took a video course, read books on writing scripts, and submitted various drafts to coverage companies and contests. I got some meetings in Hollywood, but no sale. So, I put the script aside, worked on other screenplays and a TV pilot, and produced four indie movies.

You weren’t idle during that time then!

When Covid hit, and my wife Margo and I were stuck at home with our cat and two standard poodles, I decided to turn the screenplay into a novel. After all, I had become a journalist because I wanted to write the great American novel. But I didn’t know how to write, and I had no exciting experiences to write about. Being an investigative reporter and foreign correspondent checked those boxes. Writing a novel, however, is completely different from writing a news story or a screenplay, which I think is more like haiku with short descriptions and little dialogue.

That’s so interesting. I sometimes think there’s an opinion that anyone can write a novel.

So, once again, I took a course on novel writing, read a million books on writing, watched videos, and jumped in. Seven months later, I had a first draft of what would become The Hunt for the Peggy C, a World War II maritime thriller.

Did you find it challenging?

What made this so unusual for me is that I have never been on a U-boat or a tramp steamer, and I knew next to nothing about the sea. So, I had to do tons of research because I wanted all the history and technical details (and there are lots) to be accurate. The problem was that I so enjoyed the research that I kept going down rabbit holes chasing more information, saying to myself, “What? I didn’t know that?” I was lucky to have a couple of former submarine officers check my work.

Ha! So many authors tell me that the research can become all consuming. So, what can we expect from an evening in with The Hunt for the Peggy C?

The Hunt for the Peggy Cis a World War II-era historical fiction that could be described as Casablanca meets Das Boot because it is really a love story wrapped in an action-adventure.

It’s about an American fugitive who struggles to rescue a Jewish family on his rusty cargo ship, outraging his mutinous crew of misfits and provoking a hair-raising chase by an unstable Nazi U-boat captain bent on revenge.

Rumor has it that Captain Jake Rogers, a gruff U.S. Naval Academy dropout, fled America because of a murder. Now, in the days before America entered World War II, Jake scrounges for cargo to smuggle on his decrepit merchant ship. In Nazi-occupied Amsterdam, he takes on his most dangerous load yet – a Jewish family he’s never met.

During the nerve-wracking 3,000-mile escape through naval battles, minefields, and horrendous weather, Jake’s ship struggles to outrun a U-boat commanded by Oberleutnant Viktor Brauer, an ardent Nazi who believes he is doing God’s will. The increasingly unhinged commander knows his shaky career is finished unless he rescues his kidnapped boarding party from Jake.

As the chase intensifies, Jake falls in love with the family’s eldest daughter Miriam, a sweet medical student with a militant streak who constantly challenges Jake to change his mercenary ways.

Everything seems hopeless when Jake is badly wounded, and Miriam must prove she’s as tough as her rhetoric to put down a mutiny by some of Jake’s fed-up crew of misfits — just as the U-boat closes in for the kill.

That sounds quite an adventure.

During the voyage, readers will experience the gritty world of tramp steamers and their less-than-reputable crews plying dangerous war zones in search of cargo and life inside overcrowded, smelly, and deadly U-boats. The Peggy C’s voyage takes readers from inside Nazi-occupied Amsterdam, where they will witness the ever-more-oppressive treatment of Jews, to the perilous English Channel, to Gibraltar, where Jews have been protected by the British for centuries, to a hospital in Majorca, through a minefield near Malta and then almost to Palestine, where the final confrontation takes place. Along the way, I slip in little-known titbits of history. As one author said, The Hunt for the Peggy C entertains and educates at the same time.

The Hunt for the Peggy C sounds like my kind of read. what have readers thought about it?

Robin Hutton, author of the N.Y. Times bestseller Sgt. Reckless: America’s War Horse, sums up most readers’ reaction: “I was on the edge of my seat reading it! I highly recommend this book!”

“A brilliantly researched and superbly plotted adventure story,” was how reviewer Kevin Cannon described it on Reedy Discovery.

Readers also seem to like it. One compared it to Kristen Hannah’s The Nightingale. Others called it “fantastic,” “a must-read,” and “five out of five stars.”

You must be totally thrilled with those responses John.

I’ve prepared a delicious dinner from foods featured in my novel that sailors and people in occupied Europe were forced to eat. Because everything was rationed–and the Nazis confiscated all the best produce, meat, and other foodstuffs–everyone had to improvise.

Sounds… delicious or do I mean revolting!

We’ll start with what was known in Holland as “surrogate coffee” and in France as café Petain. The formula varied depending on what was available, but it could be made of a weak concoction of chicory, ground acorns, roasted barley, or other ground grains. It could be sweetened with saccharine and condensed milk, if available. Sugar rarely was. 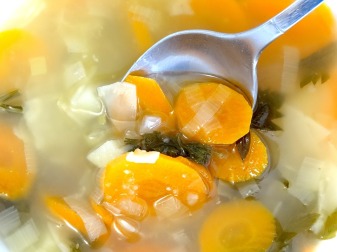 Next up is potage paysanne, a traditionally rich peasant’s soup in France loaded with vegetables that, because of rationing, is now largely carrots and water. Almost everything was made with carrots. Even when rare items like eggs were available, they were too expensive for most people, whose wages were frozen early in the war amid raging inflation. On the black market, eggs were triple the official price. 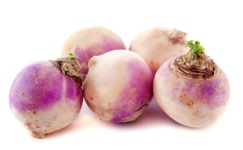 The soup will be followed by a watery rabbit stew with rutabaga­–despised and primarily served to livestock–substituting for hard-to-find potatoes and nettles substituting for spinach.

We call rutabaga turnips in the UK but it doesn’t make them taste any better!

Ah, well. I could do with losing a pound or two…

I know you don’t like wine, which was abundant, so we’ll end the meal with a digestif of Armagnac de Montal 1940, a rich brandy from Gascony; the Germans priced it officially at around fifty-seven francs, but a single bottle sold for as much as 350 francs on the black market, nearly four days’ salary for French coal miners, among the highest paid laborers. 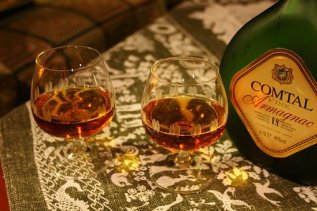 Now you know why a French adult’s average daily consumption dropped from 2,500 calories before the war to less than half that during the war.

I think many of us consume that many calories in a snack these days John! I’m not much of a drinker but I’ll join you in a class of Armagnac thank you.

Sailors on American merchant ships ate somewhat better food, although there was a lot of pumpkin and moldy meat that often had to be washed off with Condy’s Fluid, a disinfectant. Water was strictly rationed.

By comparison, U-boat sailors ate like kings. Although fresh meat and produce only lasted a couple of weeks, the 45-member crews had better-canned food, bread, and root vegetables than most Germans. The U-boats were jam-packed with food before voyages, with dried meats and bags of potatoes and bread loaves hanging from the ceiling, onions and vegetables stored under bunks and so many cans of food that one of two heads was rarely available.

After each meal, Smutje, as cooks were called on German ships, had to measure consumption so the remaining food could be moved around the U-boat to maintain the ship’s balance.

Duty stewards served the Lords, as the enlisted men were known, from a “long boat,” a deep, bucket-shaped container. There was no mess for them, so they always ate at their stations or bunks on small, collapsible wooden tables lined with racks called Fiddles that kept the food from falling off.

The officers ate in a separate midsection wardroom between the listening room and the galley on a folding table in the aisle while sitting on the lower bunks. The walls around them were lined with small lockers for storage of personal items and covered with a veneer of varnished wood, a homey touch amid all the steel.

That is absolutely fascinating. Thanks so much for staying in with me to chat about your research and The Hunt for Peggy C John. I’ve thoroughly enjoyed it.

THE HUNT FOR THE PEGGY C:  A World War II Maritime Thriller 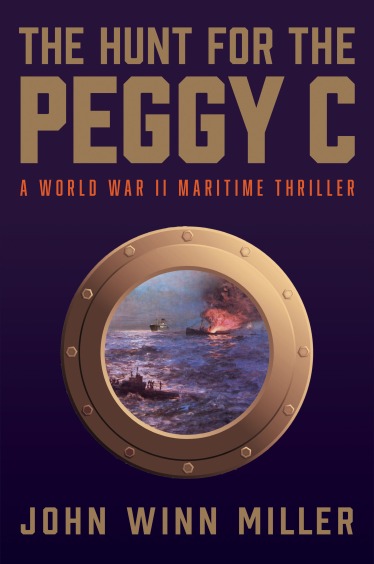 Captain Jake Rogers, experienced in running his tramp steamer through U-boat infested waters to transport vital supplies and contraband to the highest bidder, takes on his most dangerous cargo yet after witnessing the oppression of Jews in Amsterdam: a Jewish family fleeing Nazi persecution.

The normally aloof Rogers finds himself drawn in by the family’s warmth and faith, but he can’t afford to let his guard down when  Oberleutnant Viktor Brauer, a brutal U-boat captain, sets his sights on the  Peggy C. Rogers finds himself pushed to the limits of his ingenuity as he evades Brauer’s relentless stalking, faces a mutiny among his own crew, and grapples with his newfound feelings for Miriam, the young Jewish woman whom, along with her family, he must transport to safety.

The Hunt for Peggy C is available for purchase here.

John Winn Miller is an award-winning investigative reporter, foreign correspondent, editor, newspaper publisher, screenwriter, movie producer, and novelist. The Lexington, Ky., native was a foreign correspondent for The Associated Press and Wall Street Journal/Europe based in Rome, Italy; a reporter and editor at the Lexington (KY) Herald-Leader; executive editor of the Centre Daily Times (State College, Pa.) and the Tallahassee Democrat; and was publisher of The Olympian in Olympia, WA., and The Concord (N.H.) Monitor. He also helped produce four independent feature films: “Hitting the Cycle” with Bruce Dern; “Armed Response”; “Band of Robbers,” written and directed by Adam and Aaron Nee, and “Ghost in the Family.” Miller and his wife Margo live in Lexington. Their daughter Allison Miller is an actress-screenwriter-director currently starring on the ABC series “A Million Little Things.”

4 thoughts on “Staying in with John Winn Miller”