My enormous thanks to Sara-Jade Virtue for inviting me onto the blog tour for Three’s a Crowd by S. R. Booker and for sending me a copy of the book in return for an honest review. I’m delighted to share that review today.

Three’s a Crowd was published by Simon and Schuster on 27th October 2022 and is available for purchase through the links here. 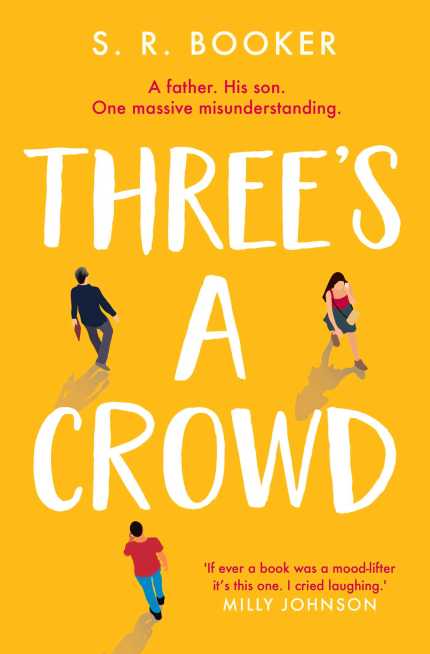 Out-of-work actor Harriet is recuperating from a crash-and-burn affair with Damian – aka ‘Cockweasel’ – and making ends meet as a barista when she meets two rather lovely men. Tom is a regular at the café, and seems like such a nice guy. Smooth-talking DJ Richard is older, but in great shape – a real silver fox.

Deciding to take a chance on both of them, Harriet doesn’t realise at first that she is actually dating father and son. Tom and Richard aren’t on speaking terms, and don’t share a last name – so how was she to know? By the time everyone finds out, both Tom and Richard are truly madly deeply in love with Harriet, and she’s faced with an impossible choice.

But as the battle for her affections intensifies, ‘Cockweasel’ makes an unexpected reappearance and begs her to give him another chance…

My Review of Three’s A Crowd

Harriet’s love life is about to get complicated.

What an absolute treat of a book. You know, occasionally the right book comes along just at the right moment for a reader and S.R. Booker’s Three’s A Crowd was exactly that for me. It’s one of those narratives where you realise your face feels odd and that’s because you’ve been grinning with pleasure from the very beginning. Three’s A Crowd brought back my sense of humour and made me happy.

In Three’s A Crowd there’s a wonderful conversational tone that makes the reader feel the characters are speaking directly to them, ensnaring them completely. I loved the way that character comments directed at the reader gave compelling hooks at the end of chapters as it made me excited to read what might be coming next and made me feel involved in the narrative.

And for anyone who thinks rom-com style fiction is simply formulaic boy meets girl, they break up and then get back together again, S.R. Booker makes them look a fool. Aside from the fact Harriet finds herself embroiled with an estranged father and son, the plot is fabulous as it twists and turns with so many elements that I simply didn’t see coming but that held me captivated. I genuinely had no idea how Three’s A Crowd would be resolved. There’s a fast pace that romps along and strands that are most unexpected that add to the sheer enjoyment of the story.

With a relatively small cast of central characters there’s the opportunity to get to know Harriet, Richard and Tom intimately so that the reader cares for them completely. I’m not usually a fan of multiple viewpoints, but here the individual voices are so clear that I absolutely loved them all. I think it illustrates the quality of S. R Booker’s writing that I simply couldn’t decide how I wanted Three’s A Crowd to end. And what I got wasn’t what I expected, but you’ll have to read the book for yourself to see what I mean! I also loved meeting those, like Nan, who don’t have such major roles. Whilst I wasn’t sure I’ll enjoy the same films in my 80s, I think Nan has several traits and habits that I might just adopt! Again, I’m not telling you which! You really do need to read this fabulous book for yourself to discover all its delights.

However, much as Three’s A Crowd is frothy, witty and fun, it has at its heart some profound themes such as identity, responsibility, mental health and family that give it really satisfying depth too. I thought the balance was perfect. Harriet’s ‘Thoughts’, although extreme, are eminently relatable and the family dynamics between Tom and Richard are central to humour and poignancy making Three’s A Crowd surprisingly emotional as well as funny.

I loved Three’s a Crowd because it’s fun, fresh and fabulous. I could not have enjoyed it more and really recommend it.

Author and screenwriter Simon Booker writes crime novels and prime time TV drama for the BBC, ITV and US TV. He is also Writer in Residence at HMP Grendon.  His TV credits include BBC1’s Inspector Lynley Mysteries, Holby City and The Mrs Bradley Mysteries; ITV thrillers The Stepfather and The Blind Date; and Perfect Strangers, the CBS romantic comedy starring Rob Lowe and Anna Friel.  Simon lives in London and Deal. His partner is fellow crime writer and Killer Women co-founder Mel McGrath. They often discuss murder methods over breakfast. Three’s a Crowd is his first contemporary fiction novel. 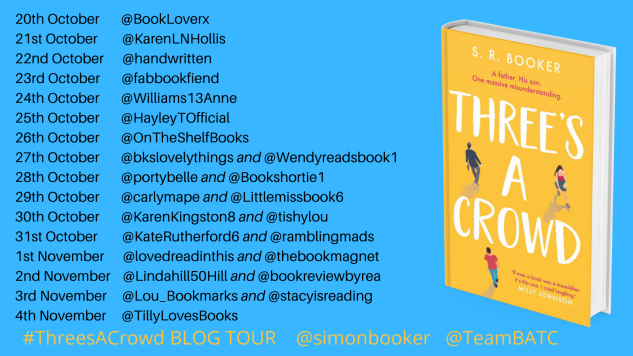