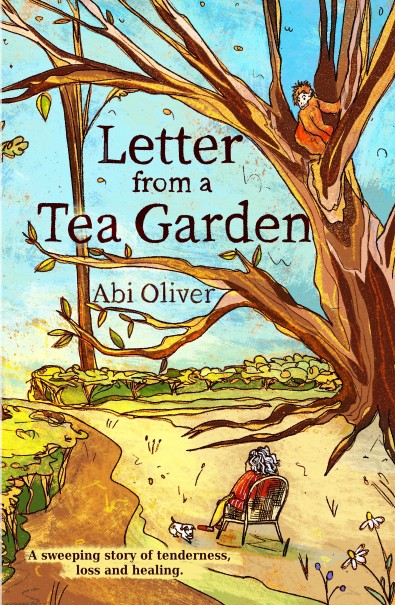 It’s far too long since I reviewed Abi Oliver’s A New Map of Love here and so I was delighted to be able to participate in the blog tour for her latest book Letter from a Tea Garden. My thanks to Becky Smith at Literally PR for inviting me to participate.

Published on 22nd June 2022, Letter from a Tea Garden is available for purchase here.

Letter from a Tea Garden 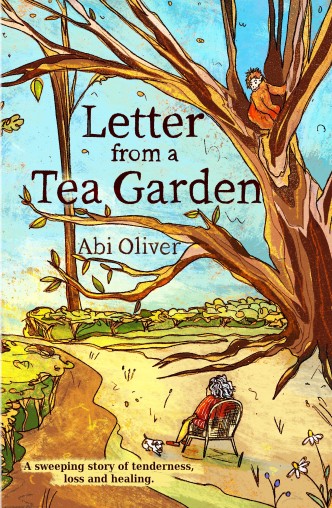 Eleanora Byngh is not in a good state. Wedded to the whisky bottle and with her house crumbling round her ears, her days seem destined to follow a lonely (and grumpy) downhill path.

When the post brings an unexpected invitation to return to the Indian tea gardens of her childhood, Eleanora risks breaking open painful memories of her younger years, lived across a tumultuous century.

As relationships with her new-found family face their own challenges, she is offered fresh truths, the chance of love and unexpected new life – if she is prepared to take them.

By the author of A New Map of Love.

My Review of Letter from a Tea Garden

A letter from her nephew returns Eleanora to India.

I confess that for the first few pages I didn’t initially warm to Eleanora as I found her use of diminutive forms like ‘doggies’ irritating and I wondered whether I would enjoy Letter from a Tea Garden, but it didn’t take long for me to realise that this is all part of Eleanora’s characterisation and her brusque, dismissive language is simply a cover for deep emotional pain that Abi Oliver conveys so convincingly. In fact, I went from being unsure about the book to loving it unreservedly!

The narrative is told through Eleanora’s conversational tone mixed with a dry wit and an emotional reticence that makes her such a multi-dimensional person. Her deep passion and grief, her desire to belong and to be valued, and her emotional insight despite her attempts to suppress her feelings, mean that Eleanora is as real as any person I’ve actually met. I think any reader can find a little bit of themselves in her so that Letter from a Tea Garden is relatable and emotionally connecting, making it completely wonderful.

The plot ranges over many years but is so deftly constructed through Eleanora’s storytelling that it flows seamlessly. I was desperate for a particular ending (though I can’t say more for fear of spoiling the plot) because Abi Oliver made me completely invested in Eleanora’s tale. Steeped in geographical richness so that the reader is truly transported to India through fantastic use of the senses, and vivid in historical accuracy and detail that adds texture and lends authenticity, Letter from a Tea Garden is an immersive, totally mesmerising read.
Whilst the story is totally convincing and entertaining, it is the themes of Letter from a Tea Garden that give it an emotional depth that I thought was so affecting. There’s a real sense of how our family and upbringing can affect us years into the future, of how life isn’t a linear, straight-forward experience but rather is messy, complicated and challenging and doesn’t always have a happy outcome. The impact of national and international events like WW1 on individuals is sensitively portrayed, and that basic human need to love and be loved simply shimmers with genuine understanding through the narrative. This is such skilled writing.
Having begun reading Letter from a Tea Garden wondering if I was going to like it, I ended up absolutely loving it. The emotional pull that Abi Oliver engenders is remarkable. Letter from a Tea Garden is a story of human frailty and strength, of love and loss and of what it is to be lost and to belong. It touches the soul, is quite wonderful and I adored it.

Abi Oliver (pseudonym of Annie Murray, bestselling novelist)has spent much of her life in the Thames Valley. At boarding school, Abi met a teacher who became a friend and mentor for 30 years, who had been a nun in Bangladesh, prompting a visit to Barishal in 1980, and sparking a life-long interest in South Asia.

She studied at Oxford and London Universities, has worked for a charity, on Indian Railways, as a nurse and as a writer. In 1991, she won the SHE/This Morning (Richard and Judy) short story competition, securing a literary agent and her first novel was accepted in 1993. She has since written 30 novels, raised four children and lives in Dorchester-on-Thames. 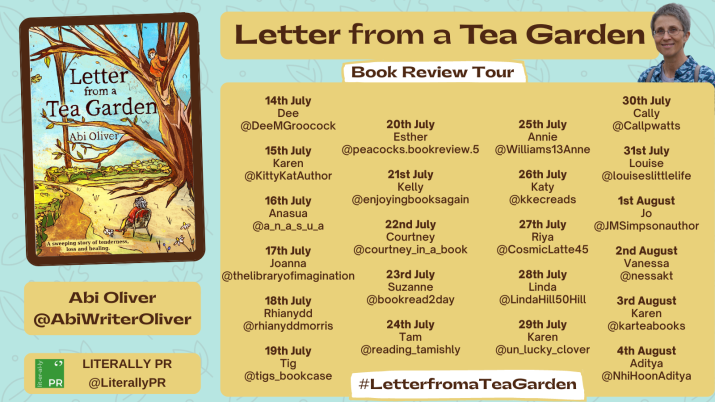 2 thoughts on “Letter From A Tea Garden by Abi Oliver”