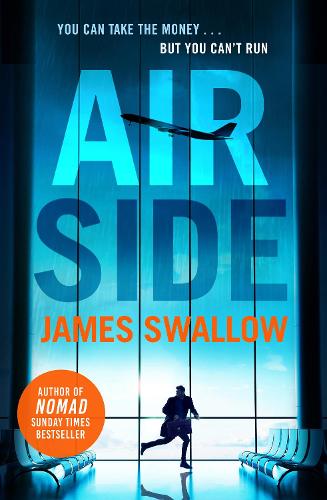 My huge thanks to Maddie at Welbeck for inviting me to be part of the launch celebrations for Airside by James Swallow and for sending me a copy of the book in return for an honest review. I’m not only sharing my review today, but I have an insight from James about how he did his research for the book.

Published by Welbeck on 26th May 2022, Airside is available for purchase here.

Businessman Kevin Tyler’s life is imploding: he’s spent months setting up a major deal and risking everything he owns, when at the last possible moment it all falls apart.

Left high and dry, Tyler knows he is going home to bankruptcy and an uncertain future. And to add insult to injury, an overbooked flight sees him bumped off the last plane home, leaving him behind to wait out a storm until the next departure the following morning.

Stranded in a remote municipal airport, Kevin’s luck seems to have run out – until he stumbles upon an unattended bag of money that could be the solution to all his woes.

There’s just one problem – the money is part of a conspiracy of blackmail and murder, and those involved are willing to do anything to keep it . . .

With Airside being set in and around an airport and all the years of travel I’ve done on business, it would be true to say I’ve been unknowingly researching it for a long time! But once I had decided what the core plot of the novel was about, I threw myself into learning as much as I could about the inner workings of civil airports, mostly in the UK and Europe. It’s fascinating to peek behind the curtain – as passengers passing through, we only skate over the everyday workings of airports, but there’s a whole population of people busy behind the scenes making sure it all runs smoothly. A less pleasant part of my research for Airside was into the darker parallel world, learning about the illegal criminal networks involved in drug smuggling and human trafficking around the fringes of Europe, which underpins some aspects of the novel’s plotline.

It most certainly does James. You made me re-evaluate my whole understanding of airports, and I’ve taken hundreds of flights.

My Review of Airside

Kevin Tyler is having a bad day.

Not having read James Swallow before I wasn’t sure what to expect from Airside. What I got was a fast-paced, cleverly written, highly visual narrative that would make a brilliant feature film. It comes as no surprise to discover the author is also a screenwriter. Alongside a pacy read, however is a fascinating manipulation of readers as James Swallow forces them to confront their own morality and consider what they might do in Kevin’s situation.

James Swallow presents an eye-opening, credible scenario of the levels of violence and corruption behind the façade of normality in an airport that made me feel naïve and unthinking. Plotted within the traditional unities of time, overnight, place, in a remote airport, and action in the possession of the bag of money, James Swallow brings a fresh approach. There’s considerable brutality here but somehow it doesn’t feel gratuitous. Rather James Swallow helps the reader understand how our pasts – whether we suppress domestic violence or are steeped in national, collective aggression – shape our present lives. I thought this added depth and interest to the fast paced plot.

I didn’t warm to any of the characters, except perhaps Maddie, but that didn’t stop me being invested in what happened to them. Almost all, from Kevin, through Von Kassel to Oleg, have some level of criminality that illustrates just how easy it is to become embroiled in illegality. The great touch here though, is the difference between Kevin’s hapless situation and Olen’s inherent and intense brutality. What the author does is to make the reader consider a scale of criminality that doesn’t lead to easy conclusions. There’s an almost Shakespearean quality to the flawed individuals here.

Airside is highly entertaining, and although it’s a book I wouldn’t normally read, I found it engaging and interesting. Those who enjoy this kind of thriller will absolutely love it. Oh, and if you’re reading Airside whilst contemplating a new career, you might just want to think about engineering! 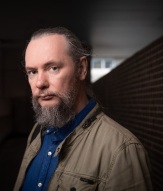 James Swallow is a New York Times, Sunday Times and Amazon bestselling author, a British Academy of Film and Television Arts (BAFTA) nominee, a former journalist and the award-winning writer of over fifty books, along with numerous scripts for video games, radio and television.

His Marc Dane novels are fast-paced action thrillers featuring a former MI6 field officer turned private security operative; NOMAD, the first in the series, is published in the US by Forge. Book two – EXILE – will be on sale in May 2019.

2 thoughts on “Airside by James Swallow”