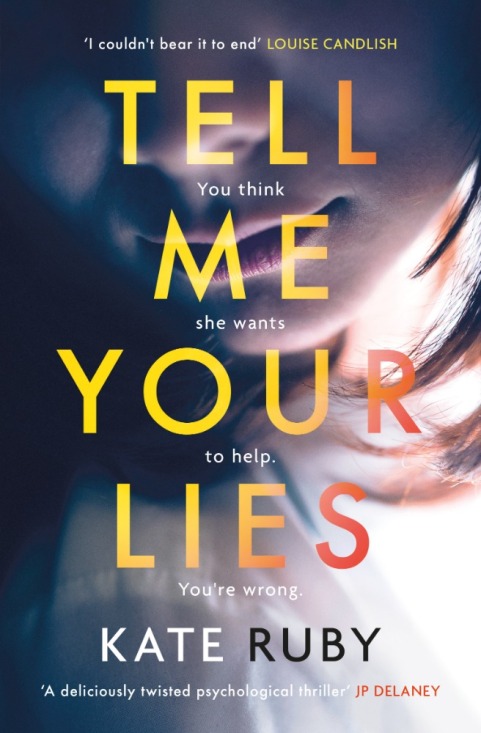 I’ve had Tell Me Your Lies by Kate Ruby calling to me from my TBR for many months and I was delighted to be invited onto the blog tour for it by the folk at Midas PR. It’s a real pleasure to share my review of Tell Me Your Lies today.

Tell Me Your Lies was published by Simon & Schuster on 28th April 2022 and is available for purchase through the links here.

Tell Me Your Lies 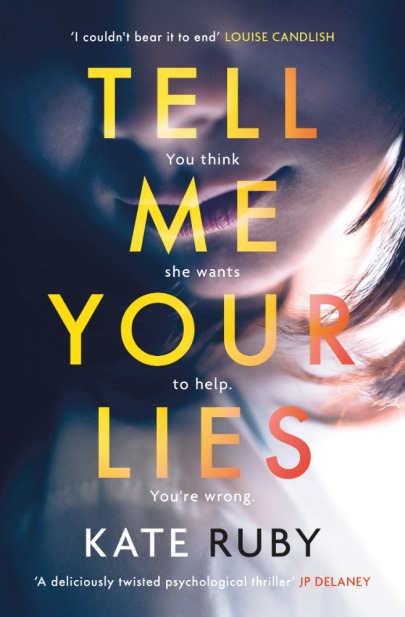 You think she wants to help.
You’re wrong.

Lily Appleby will do anything to protect the people she loves. She’s made ruthless choices to make sure their secrets stay buried, and she’s not going to stop now.

When her party-animal daughter, Rachel, spins out of control, Lily hires a renowned therapist and healer to help her. Amber is the skilled and intuitive confidante that Rachel desperately needs. But as Rachel falls increasingly under Amber’s spell, she begins to turn against her parents, and Lily grows suspicious.

Does Amber really have Rachel’s best interests at heart or is there something darker going on? Only one thing is clear: Rachel is being lied to. Never quite knowing who to believe, her search for the truth will reveal her picture-perfect family as anything but flawless.

Loosely based on a true story, this is perfect for fans of Sabine Durrant, Teresa Driscoll and Kate Riordan – the perfect read to be devoured in one sitting, bursting with tension, layered characters and relationships which are never as simple as they first seem . . .

My Review of Tell Me Your Lies

I’m not sure I’d call Tell Me Your Lies a psychological thriller, as I didn’t find it a fast-paced read that left my heart thumping. In essence the plot is about a young woman, Rachel, with an addictive personality whose family, and her mother Lily in particular, pay Amber to assist. It is also, however, much, much more than that and a magnificent psychological insight that is truly compelling. I thought it was a cracking read.

There’s a malevolent undertone from the very first page of Tell Me Your Lies that makes the reader wonder just what kind of narrative they are going to get. Kate Ruby drips hints like poison so that the reader becomes intoxicated with wanting to find out what happens. The first person voices of Lily and Rachel and the final chapter have the effect of making the reader feel they are part of the process. They are involved in the conversations and the plot every bit as much as the characters. Even the chapter endings are like mini barbs, hooking in the reader still further. What worked so brilliantly for me was that I simply didn’t predict the final outcomes and I have a feeling that I’ve been manipulated by the author every bit as effectively as the characters manipulate each other. This is such skilled writing.

I loathed all three main women but my goodness I found them fascinating; from the self-destructive Rachel through the controlling, domineering Lily to the too-good-to-be-true Amber, there’s a veracity, a universality, that feels absolutely right. The fact that Tell Me Your Lies is loosely based on a real life Amber makes the toxic dynamics all the more interesting. Indeed, Amber is the perfect name for her character as, just as insects become trapped in natural amber, this Amber traps others in her thrall, increasing their vulnerability and suggestibility. That said, the pronouns of the title could relate to any of the three women. At no point is it entirely clear just who is telling whom the lies. Every single one – Rachel, Lily, Amber – is so wonderfully flawed and mesmerising.

Dripping with vitriol, deception and truth, Tell Me Your Lies is a cracking read. It’s about control, coercion, nature and nurture and the lies we tell ourselves. Kate Ruby creates truly toxic family dynamics that leave the reader reeling. It’s uncomfortable to read and yet it doesn’t let the reader put it down. I thought it was fabulous. 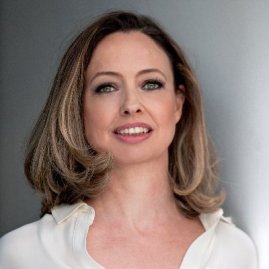 Kate Ruby is a producer and screenwriter, with a highflying career in television. Tell Me Your Lies, a psychological thriller, is her debut novel and is currently in development for a major TV show. As an executive producer for drama, she spent a decade at the BBC, working on shows including Spooks and Being Human. Currently Head of Television for a global production company, she has worked on major Netflix shows including Watership Down, Traitors and The English Game. She has recently worked on the BBC/HBO adaptation of JP Delaney’s bestselling thriller The Girl Before, starring Gugu Mbatha Raw and David Oyelowo.

2 thoughts on “Tell Me Your Lies by Kate Ruby”