Sometimes there’s a book that calls to me completely but somehow I simply haven’t had time to read it. Such is the case with Ruth Druart’s While Paris Slept. Now with Ruth’s next novel The Last Hours in Paris heading our way in July I simply had to invite Ruth onto Linda’s Book Bag. I’m thrilled Ruth agreed to come and has provided the most brilliant guest post about place and belonging.

Paris 1944
A young woman’s future is torn away in a heartbeat. Herded on to a train bound for Auschwitz, in an act of desperation she entrusts her most precious possession to a stranger. All she has left now is hope.

Santa Cruz 1953
Jean-Luc thought he had left it all behind. The scar on his face a small price to pay for surviving the horrors of Nazi Occupation. Now, he has a new life in California, a family. He never expected the past to come knocking on his door.

On a darkened platform, two destinies become entangled. Their choice will change the future in ways neither could have imagined…

Published by Headline Review, While Paris Slept is available for purchase in all formats through the links here.

The Last Hours in Paris 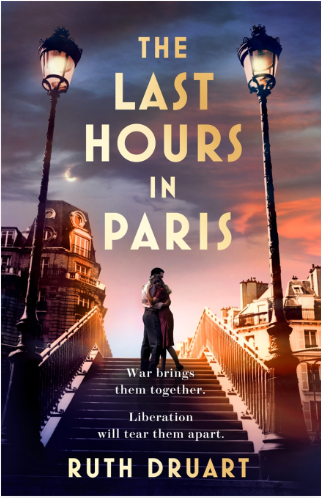 Paris 1944. Elise Chevalier knows what it is to love…and to hate. Her fiancé, a young French soldier, was killed by the German army at the Maginot Line. Living amongst the enemy Elise must keep her rage buried deep within.

Sebastian Kleinhaus no longer recognises himself. After four years spent fighting a war he doesn’t believe in, wearing a uniform he despises, he longs for a way out. For something, someone, to be his salvation.

Brittany 1963. Reaching for the suitcase under her mother’s bed, eighteen-year-old Josephine Chevalier uncovers a secret that shakes her to the core. Determined to find the truth, she travels to Paris where she discovers the story of a dangerous love that grew as a city fought for its freedom. Of the last stolen hours before the first light of liberation. And of a betrayal so deep that it would irrevocably change the course of two young lives life for ever.

The Last Hours in Paris will be published by Headline Review on 7th July and is available for pre-order through the links here.

Place. Identity. Sense of belonging. Home. These words speak to all of us, but especially to those who have been displaced, voluntarily or not. Personally, I only started to think about these concepts, when I left my home country at the age of twenty-three. It was supposed to be temporary move, but I ended up staying in France, pursuing a career in international education and raising three boys.

Bringing up children in a culture that is not your own brings its own challenges, and although France is only across the water from the UK, I soon discovered many differences that I hadn’t been expecting. Most of them were, at the worst, frustrating and bewildering, but the hardest for me to adapt to was the French system of education, yet I put my own children through it. I came to the conclusion that it was more important for them to have a sense of belonging to the country in which they were growing up, and so rather than send them to an international school, such as the one where I was teaching, they attended local French schools. I sometimes wondered how they may have developed differently if they’d grown up in the UK, and it made me think about how much culture forms part of our identity. This idea inspired me to write my first novel, While Paris Slept. I wanted to write about a child who was thrown from one culture into another, and how this disrupts his sense of identity and his sense of belonging.

Teaching in an international school, where students come from all over the world and often move every three years, gave me the ideal opportunity to explore these ideas further. I started a Masters in International Education with Bath University, focusing on Third Culture Kids (TCKs) and their sense of belonging – a TCK is someone who has been brought up with more than one culture. Through interviews with students at my school and other TCKs (aged 11-15), I discovered they do have a strong sense of belonging, though it might not be the same as that of a monocultural child. They may not feel they belong to one particular country; in fact, they may feel close ties to more than one country, and have trouble naming one as home. For these people, the question, ‘where do you come from?’ is not a simple one. Primarily, their sense of belonging is more towards people; foremost their families, and then to the international community as a whole – to other people like them. For example, a Japanese/Hungarian person might form a connection with a French/Spanish person. This theme of sense of belonging comes through in While Paris Slept as the characters question their sense of home and what it really means. Is it a place, or is it the people we love? And who’s to say you have to name only one country as your home? Having both British and French nationalities now, I don’t feel any less British than I was before, but I do have another culture and country where I feel at home, and I find this enriching. Only when I had to learn another language, did I truly come to fully appreciate my mother tongue. What a delight to be able to express myself perfectly and to be understood! If I hadn’t had this experience, I’m not sure I would have written a book at all. I think I had to experience culture shock first hand to be inspired to write about it. After having struggled during my first years in France, I wanted to portray this feeling of ‘unbelonging’ through a child’s perspective in While Paris Slept.

Sam, who’s grown up in America and only speaks English, is suddenly thrown into Le Marais, the Jewish quarter of Paris, at the tender age of nine. He doesn’t speak the language or understand the culture, and his parents struggle as they watch him flounder and suffer, but do they love him enough to put his happiness before their own? This is the question at the heart of the book. The main theme is parental love, though the story also touches on sense of identity and the importance of place and home. I wanted the reader to experience a foreign country through this boy’s eyes, to be in his head, as he struggles with culture shock and a sense of alienation. I also wanted the reader to empathise with Sam’s parents who gave him up, then survived Auschwitz and desperately want their child back.

The story reaches a resolution years later when Sam is older and wise enough to see things with a more rounded perspective, and comes to realise that ‘home’ can mean more than one place, more than one country, and even more than one set of parents.

That’s wonderful Ruth. Thank you so much. I have a feeling that even when we’re ‘home’ we can experience ‘unbelonging’ too. You’ve made me even more determined to get While Paris Slept to the top of my TBR pile and I can’t wait to get my hands on The Last Hours in Paris too!

Ruth Druart grew up on the Isle of Wight, moving away at the age of eighteen to study psychology at Leicester University. She has lived in Paris since 1993, where she has followed a career in teaching. She has recently taken a sabbatical, so that she can follow her dream of writing full-time.