Since I began reviewing for My Weekly I have had the privilege of reading so many brilliant books. Today I’m delighted to share my views on Breakneck Point by T. Orr Munro.

Published by HQ on 14th April 2022, Breakneck Point is available for purchase here. 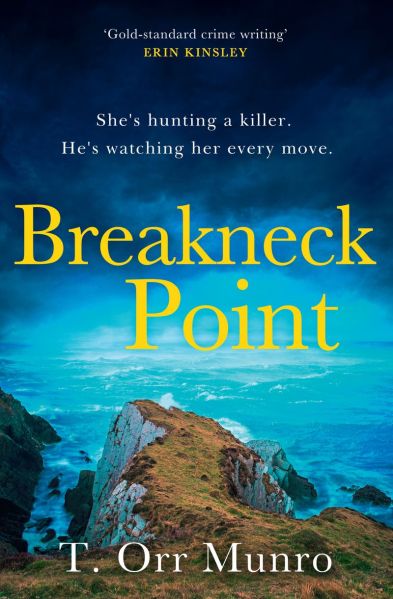 CSI Ally Dymond’s commitment to justice has cost her a place on the major investigations team. After exposing corruption in the ranks, she’s stuck working petty crimes on the sleepy North Devon coast.

Then the body of nineteen-year-old Janie Warren turns up in the seaside town of Bidecombe, and Ally’s expert skills are suddenly back in demand.

But when the evidence she discovers contradicts the lead detective’s theory, nobody wants to listen to the CSI who landed their colleagues in prison.

Time is running out to catch a killer no one is looking for – no one except Ally. What she doesn’t know is that he’s watching, from her side of the crime scene tape, waiting for the moment to strike.

My Review of Breakneck Point

My full review of Breakneck Point can be found on the My Weekly website here.

However, here I can say that Breakneck Point is a fast paced, exciting, crime thriller from a writer I think will be winning all the awards in future. I thought it was brilliant.

Do visit My Weekly to read my full review here.

Orr Munro was born in Hampshire to an English mother and a Greek/Armenian father who later moved to Devon. After university she trained as a CSI, then became a secondary school teacher. She changed career at 33 to become a police and crime journalist. She has since returned with her family to live in North Devon, the setting for Breakneck Point. Her time as a CSI provided much of the inspiration for the novel, shining a light on what happens behind the crime scene tape.