With Europe in its current state, there couldn’t be a more poignant time to invite lovely Wendy Holden back to Linda’s Book Bag to chat with me about her latest book, I Give You My Heart and share an extract from it. Wendy’s writing has a focus on war, the dispossessed and those whose personal stories illustrate the profound resilience of the human spirit. It feels a privilege to have I Give You My Heart on my TBR.

Wendy has been a previous visitor to the blog and you’ll find Born Survivors here.

Let’s see what Wendy told me about I Give You My Heart:

Staying in with Wendy Holden

Welcome Back to Linda’s Book Bag Wendy. Thank you for agreeing to stay in with me once again.

Thanks for inviting me and for being so brilliantly supportive of authors in your incredible blog.

That’s very kind of you to say so. I know I have the answer, but which of your books have you brought along to share this evening and why have you chosen it? 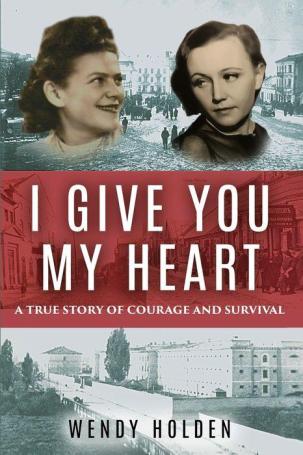 I have brought my latest book I Give You My Heart which tells the extraordinary story of a Jewish girl hidden in Warsaw during WWII by Catholic friends of her parents. This unlikely friendship led to one of the most remarkable acts of selfless sacrifice after the Nazis invade their country. The teenager, guilty only of being Jewish, is saved from the fate that awaits her family by courageous Poles who paid the ultimate price for their bravery. So much was risked and so much lost but the legacy of their courage, love, and trust lives on. Now, at last, their story can be told and I am delighted to be the one chosen to tell it.

That sounds like a real privilege Wendy. It seems to me we probably haven’t learnt much from history…

What can we expect from an evening in with I Give You My Heart?

Readers can expect to be humbled and amazed by the lengths some people will go to help others in times of war. That thought is especially timely now, as we all reel from the ongoing crisis in Ukraine. As a former war correspondent and an author who specialises in writing about the humanity to be found wherever there is inhumanity, I am humbled by the accidental timing of this publication.

It must feel bizarre to have written about a true story given what’s currently happening. How did this tale come to your attention?

The story first came to my attention five years ago after a woman approached me at the end of another presentation of my bestseller Born Survivors at the Holocaust Museum in Washington DC. Shyly, she asked me if I’d write her mother’s story. To begin with, I wasn’t sure as I was busy with other projects but once I looked further into it I was so moved by the courage involved that I felt compelled to do as she asked. 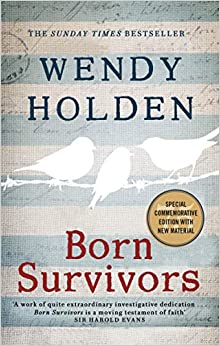 She and I travelled to Poland to speak to the one person still alive who remembered what happened and I began the slow process of assembling and corroborating what she was able to tell me. What struck me most was how these two families ignored convention and prejudice to help one another and how that friendship endures today in their descendants.

Let’s hope that friendship and concern for others can prevail in current times too.

The staff at the museum told me that, just like Born Survivors, they thought this story unique and worthy of a movie one day. It has been a privilege to chronicle it for history and I only wish I could have met the two women involved. The book comes out on April 28 but has already received rave reviews and will be the Holocaust Educational Trust’s Book of the Month in July.

Despite the subject matter, this must give you immense satisfaction in knowing you’re not letting the ordinary people affected by war be forgotten. You should be incredibly proud.

I am bringing the words to the first verse of the Ukrainian national anthem which apply also to the beleaguered people of Poland during WWII. We must never forget the mistakes of the past and it is our moral duty to those who died not to repeat them.

Glorious spirit of Ukraine shines and lives forever.
Blessed by Fortune brotherhood will stand up together.
Like the dew before the sun enemies will fade,
We will further rule and prosper in our promised land.

Crikey Wendy. You’ve brought a tear to my eye with that. Thank you so much for chatting about I Give You My Heart. I’ll share a few more details before letting readers have access to an extract from the book:

I Give You My Heart

An unlikely friendship between two couples leads to one of the most remarkable acts of selfless sacrifice when the Nazis invade their country. A teenage girl, guilty only of being Jewish, is saved from the fate that awaits her family and hidden by her parents’ Catholic friends – who pay the ultimate price for their bravery. So much was risked and so much lost but the legacy of their courage and trust lives on through the surviving generations. Now, at last, their story can be told…

I Give You My heart will be published by Amsterdam Publishers on 28th April and is available for pre-order here.

An Extract from I Give You My Heart by Wendy Holden

In the courtyard the Germans separated into several groups and efficiently blocked every entrance to the building. After a while the family heard the clatter of their jackboots on their stairwell followed by loud banging on the doors of their apartment from the front and from the kitchen. It was them they had come for.

Ella recalled, “I was back living with Zula and preparing for my final exams when the Gestapo came. They were looking for Zula and her husband.” As the noise grew louder, the petrified Jowita and Kalina huddled against Pamaja’s legs in their nightclothes, all of them too afraid to move or even speak.

When Artur opened the front door, she said the intruders burst in and began rifling through the whole apartment. “They started with me and seeing that I had a lot of books around me, they asked, ‘What kind of books are they?’ throwing them around, deciding that this or that was illegal.” Jowita recalled that the five men, including two Gestapo officers in uniform, seemed very well informed about the layout of their home. They quickly scattered into the various rooms, shining flashlights into the faces of the occupants, who stood shivering in their nightclothes. They showed no interest in Pamaja, Ms. Nitecka, Miss Linka, or the two little girls, closing the double doors to the parlour after they had checked who they were. Instead, they continued to turn the place upside down and to focus only on Zula, Artur, and Ella.

Jowita still shivers at the memory. “We were so very afraid because, although we lived with the fear that we could be killed at any moment, German soldiers had never come to our apartment before. And of course we didn’t even know then how dangerous it was – with a Jewish girl, the Jewish owner of the flat, and two members of the resistance in our midst. In the dining room the Gestapo gathered only my parents and Ella. We couldn’t see anything because they had closed our door, but I heard shouting and my father falling down. I had no idea what they did to him but learned later that Mama had said something to calm Ella and had taken her hand and a German had shoved her away at which point my father had jumped in to defend her and was beaten to the floor.”

Straining to listen and frozen in terror, Jowita said she and Kalina and Pamaja stood by their beds as if they were statues. “I didn’t understand anything the soldiers said in their fast-barking screams, but I could hear only calm responses from my mother. Unfortunately, she had hidden almost everything from them but forgot to check her nightstand where, the previous evening, she’d carelessly thrown one of her false IDs – the German one with her photograph but the name of Zofia Pauser, a Wehrmacht officer’s widow. If they hadn’t found that then everything might have been different.”

The Gestapo informed Zula, Artur, and Ella that all three would accompany them to their headquarters and ordered them to get dressed. At Zula’s insistence, they allowed Ella to change quickly in the bathroom, while she and Artur were allowed into their bedroom one at a time, with the door half open so that the Gestapo could make ensure that they wouldn’t try to escape. The previous evening Zula and Artur had been to the Name Day party of a friend so she pulled on the evening dress she’d been wearing the night before and Artur put on his suit. Before being taken away, Zula demanded a few moments to say goodbye to her children. She wore a fixed smile as she drew her young daughters into her arms – a moment Jowita will never forget.

“They didn’t want Daddy or Ella to kiss us goodbye. When the door opened, I couldn’t see them in the room beyond, just the two officers. Under the supervision of a soldier standing in the doorway Mama came in very elegantly dressed and kissed us goodbye. I was weeping and told her, “What will I do? I will never see you again!” She was a very strong person but she almost collapsed then. She said something and smiled and then she whispered to Pamaja to take care of us. Pamaja told her, “Of course I will. I promise,” and she then marked the sign of the cross on Mama’s forehead. Then they took the three of them away.”

When the door slammed shut behind the departing Gestapo and soldiers, Jowita said: “Throughout the whole apartment building there was a truly deathly silence then. They didn’t take anyone else from any other apartment, just from ours. In the courtyard we could hear the steady tramp of boots and, in contrast to their military rhythm, the sound of Mother’s little steps in her high heels. It was a sound that haunted me for years. Then it was silent again.”

I’m sure you’ll have been as affected by Wendy’s writing as I have. Just a reminder, that I Give You My Heart is available for purchase here.

Wendy Holden was a journalist for eighteen years, including a decade at the Daily Telegraph where she worked as a foreign and war correspondent. She is author and the co-author of more than thirty books, including several bestselling wartime biographies, including Tomorrow to be Brave, Till the Sun Grows Cold, and Behind Enemy Lines. She lives in Suffolk, England with her husband and two dogs and divides her time between the U.K. and the U.S.