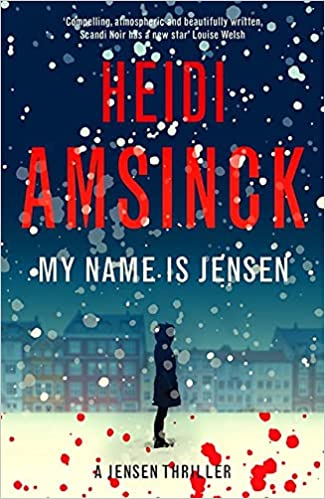 It was a real pleasure to find a surprise copy of My Name is Jensen by Heidi Amsinck in my book post a couple of months ago. My grateful thanks to the folk at Muswell Press for sending me a copy. I recently spoke about the book online (see here) and I’m delighted to share my review today.

Published by Muswell Press on 31st August, My Name is Jensen is available for purchase here.

My Name is Jensen

Guilty. One word on a beggar’s cardboard sign. And now he is dead, stabbed in a wintry Copenhagen street, the second homeless victim in as many weeks. Dagbladet reporter Jensen, stumbling across the body on her way to work, calls her ex lover DI Henrik Jungersen.

As, inevitably, old passions are rekindled, so are old regrets, and that is just the start of Jensen’s troubles. The front page is an open goal, but nothing feels right…..

When a third body turns up, it seems certain that a serial killer is on the loose. But why pick on the homeless? And is the link to an old murder case just a coincidence?

With her teenage apprentice Gustav, Jensen soon finds herself putting everything on the line to discover exactly who is guilty.

My Review of My Name is Jensen

Finding a homeless person stabbed to death is just the start of Jensen’s problems.

I had absolutely no idea what to expect when I picked up My Name is Jensen, but what I found was a gripping, fast paced thriller with the potential for a series that I cannot wait to read.

My Name is Jensen is incredibly well crafted. The writing is varied with a range of sentence structure that I found utterly compelling because it pulled me in completely, especially when blended with naturalistic dialogue and a real sense of place in Copenhagen. The snowy weather adds to the atmosphere so that My Name is Jensen deserves a place with the best of Scandi Noir writing. Add in short, pacey chapters and there’s a real thrill in reading this book.

I loved the plot. The times and dates in My Name is Jensen give an immediacy that elevates the tension, and events come with great pace. It thoroughly appealed to me that the murders have sufficient detail to engage the reader without extraneous gore because Heidi Amsinck has the skill to move and entertain without resorting to shock tactics.

Whilst there is a conventional police investigation in My Name is Jensen as the body count increases, what I enjoyed so much was journalist Jensen’s parallel efforts to find out what is going on. As the exciting story unfolds, we come to know Jensen really well, to the extent that it is difficult to accept she’s a fictional character. I loved the fact she is only known as Jensen. There’s no diluting of her identity, but rather the creation of an intriguing person who is fascinating. I wanted –  and want – to know more about her. She’s the perfect combination of feisty and vulnerable, careful and reckless, stubborn and caring so that her personality leaps from the page. Similarly, the supporting cast of characters like Henrik, Gustav and Margrethe are people I really want to meet again. I’m not usually interested in investing in a series as there are always so many books to read and so little time in which to do it,  but Heidi Amsinck has created a set of people I care about and want to meet again as soon as possible. The frisson of sexual tension between Jensen and Henrik adds another layer of interest, but never over dominates the story so that their relationship feels vivid and natural.

The themes that slip beneath the surface of the narrative too are recognisable and thought provoking.  Relationships at many levels from marital to professional, including friendship and family, afford the reader personal or vicarious hooks into the story, but Heidi Amsinck doesn’t shy away from bigger themes too such as the plight of the homeless, mental health, immigration, the power of money and status and so on, so that whilst I felt I’d been brilliantly entertained by My Name is Jensen, I also felt I’d been given an intelligent, considered and high quality story too.

I thought My Name is Jensen was an absolute cracker of a thriller. I was desperate to see how the story would be resolved but simultaneously didn’t want it to end because I was enjoying it so much. I fear it might be a quiet book as it comes from a smaller independent publisher, but I think My Name is Jensen shouldn’t be missed. I’m very much looking forward to more from Heidi Amsinck – and Jensen.

Heidi Amsinck, a writer and journalist born in Copenhagen, spent many years covering Britain for the Danish press, including a spell as London Correspondent for the broadsheet daily Jyllands-Posten. She has written numerous short stories for radio, including the three-story sets Danish Noir, Copenhagen Confidential and Copenhagen Curios, all produced by Sweet Talk for BBC Radio 4.

A graduate of the MA in Creative Writing at Birkbeck, University of London, Heidi lives in London.

She was previously shortlisted for the VS Pritchett Memorial Prize. Last Train to Helsingør is her first published collection of stories. Her crime novel My Name is Jensen, set in Copenhagen, will be published in August 2021.

2 thoughts on “My Name is Jensen by Heidi Amsinck”