I’m delighted to participate in the blog tour for Ghosts by Dolly Alderton. My enormous thanks to Hannah Sawyer at Penguin for inviting me to take part and for sending me a copy of Ghosts in return for an honest review.

Ghosts was published in paperback yesterday, 22nd July 2021 and is available for purchase through the links here. 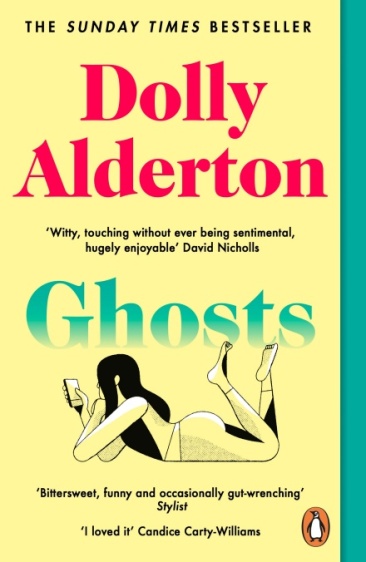 Nina Dean has arrived at her early thirties as a successful food writer with loving friends and family, plus a new home and neighbourhood. When she meets Max, a beguiling romantic hero who tells her on date one that he’s going to marry her, it feels like all is going to plan.

A new relationship couldn’t have come at a better time – her thirties have not been the liberating, uncomplicated experience she was sold. Everywhere she turns, she is reminded of time passing and opportunities dwindling. Friendships are fading, ex-boyfriends are moving on and, worse, everyone’s moving to the suburbs. There’s no solace to be found in her family, with a mum who’s caught in a baffling mid-life makeover and a beloved dad who is vanishing in slow-motion into dementia.

Dolly Alderton’s debut novel is funny and tender, filled with whip-smart observations about relationships, family, memory, and how we live now.

My Review of Ghosts

Ghosts was a most surprising book. I had actually been expecting a light romcom read but Ghosts has far more depth and thought-provoking elements than I anticipated.

There’s a traditional base to the book as Nina and her 30 something friends look for love and develop relationships in an almost balletic dance of modern lifestyles. Plenty of alcohol and sexual activity weaves through their experiences, but Dolly Alderton uncovers entirely how this type of life impacts her characters so that it almost becomes a confessional or, indeed, a handbook of how to navigate life, presented through a hugely entertaining and frequently revealing read.

I found Nina’s first person story very affecting, not least because she is the conduit for the other characters so that I understood her all the more as she described the lives of her friends, particularly Lola. I did feel the men were generally presented somewhat stereotypically and negatively, but this was balanced by the depiction of Nina’s father whom I found to be empathetic and emotionally moving. His illness is all too familiar in today’s world and Dolly Alderton weaves it into the narrative with a raw unsentimental truth that I thought was excellent.

The plot follows a year in Nina’s life. That said, there is more of a series of events rather than a cosy narrative and I enjoyed Ghosts all the more for it. I was occasionally shocked, occasionally dismissive and scornful, and occasionally filled with admiration for some of Nina’s behaviour so that she became a real person to me and I felt I had been given a crystal clear insight into a troubled young woman. Indeed, reading Ghosts made me so glad that I don’t have to inhabit the kind of world Nina lives in, so acerbically and artfully does Dolly Alderton describe it. There’s a rawness at times – a bit like scraping a limb on a brick wall – in reading this book because it stings and chafes the reader’s psyche.

I found Ghosts perfectly titled. Characters ghost one another, their lives are filled with the ghosts and memories of their pasts and some feel as if they are becoming ghosts of their former selves. Again it is Bill, Nina’s father, who embodies this most poignantly as his memory fades and his confusion increases.

I finished Ghosts feeling sad for the thirty something generation, and as if I’d been given a privileged understanding of a world where contentment seems scarily and poignantly all too frequently out of reach. I think Ghosts might polarise readers, but I thought it was a moving, realistic portrayal of a desperate generation. I thoroughly appreciated it.

Dolly Alderton is an award-winning author and journalist based in London. She is a columnist for The Sunday Times Style and has also written for GQ, Red, Marie Claire and Grazia. She is the former co-host and co-creator of the weekly pop-culture and current affairs podcast The High Low. Her first book Everything I Know About Love became a top five Sunday Times bestseller in its first week of publication and won a National Book Award (UK) for Autobiography of the Year. Ghosts is her first novel.

5 thoughts on “Ghosts by Dolly Alderton”