It gives me enormous pleasure to welcome Kate Abley to Linda’s Book Bag today to stay in with me and tell me about her latest book.

Staying in with Kate Abley

Welcome to Linda’s Book Bag Kate and thank you for staying in with me.

It’s lovely to be here Linda, thank you for inviting me.

I have brought along my second novel, Hausa Blue.

I love that cover Kate. What genre is is?

I’m not entirely sure what genre it is, but I do know it’s an adventure and very different from my last book, Changing the Subject.

I suppose I wanted to play a little with the historical novel genre. The central character, Dipa, is a young and beautiful dressmaker’s daughter who reveals how she was caught up in a rags to riches life and ended up in the Tower of London.

I am a Londoner, born and bred, and given the capital’s rich and colourful history I set the book there, just down the road from where I actually live in East London.

London has also had ties with the rest of the world for centuries, some good and some bad, so I also set part of the book in the Bengal Region of India and Bangladesh.

I love novels where we can have an insight into different cultures Kate.

I love historical novels but I also wanted to write something that reflects the cultural makeup of the UK now. To do that I had to invent a slightly different history, where one of the King George’s (not the mad one) married an African princess in the 18th century. This means that the royal family, as well as most upper-class families are multi-racial.

Well, THAT’S a topical theme at the moment!

Their cultural identity doesn’t have much bearing on the way the characters behave. As Dipa confesses/boasts of the extravagance and decadence of the Aristoi class she was so willing to join, we learn about the Lady Aditi Egremont-Cooch-Bahar, rich, beautiful and from one of the most influential families in the Empire who is undisputed queen of the Yangans, the ‘it-girls’ of this world.

Aditi is clever too, but has played one too many japes and escaped with the rightful heir and the person who holds the fate of the future in her head. She is on the other side of the world in the land of some of her forefathers. She has a sort of plan to turn the tide of the revolution back in her favour, all she needs is the right equipment.

I know it sounds a bit strange, with quite a few twists and turns, but the structure means that the reader should be carried along with the story of the characters.

I think it Hausa Blue sounds exactly my kind of read Kate.

I hope you don’t mind, but I have brought another book.

Absolutely not! Of course I don’t mind. The more books the better I say. Which one did you bring?

This one is non-fiction. It is called, The Art of Benin by Nigel Barley and is published by The British Museum.

You might recognise the cover image because it is the same as the image on the cover of Hausa Blue. I am fascinated with the woman who this 17th pectoral mask represents.

The beauty and craftsmanship are gorgeous but I think knowing a little about who she was adds to its wonder. She is thought to be Queen Idia of the kingdom of Benin, in what is now Nigeria. She was a great warrior who is said to have led many battles against the enemies her son the Ibo, or king.

The mask forms part of the collection known as the Benin Bronzes, which were looted in 1896 and many of which now reside in the British Museum.

Next time you’re in London, you might enjoy a trip to see the exquisite metal, wood and ivory work, which dates from the 1600s. I go there quite often, to look at the beautiful Queen Idia, as well as many other favourites. So you never know, we may bump into each other. The British museum serves very good cake.

Did you say cake? And books? It’s a date! Thank you so much for staying in with me to chat about Hausa Blue Kate. I think it sounds utterly fascinating. Let me give blog readers a few more details: 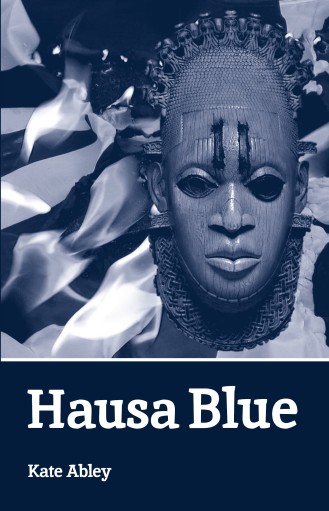 Person’s unknown bring our world a message in an adventure about identity, change and frocks. Lots of them.

From the contaminated Capitol to moth-eaten Bengal, a multi-racial British Empire is getting round to revolution. Will the Queen’s imposter be released from the Tower of London? Who is she now? Her lawyer clings to Justice but might lose her grip; How many of those bloody beautiful idiot women are there?

The New Management is making the Empire change and it in turn is changing them, the counter-revolutionary’s knees hurt and Joshi hasn’t got a suit that fits.

Welcome to an alternative past, present and future.

Kate Abley was accidentally born, and now intentionally lives, in London, England, where, amongst other things she has been an awful front woman in a psychobilly band, good dish-washer, bad shop assistant, officially outstanding Early Years teacher, nice charitable fund-giver and failed political activist. Last century, she wrote the non-fiction book, Swings and Roundabouts: The Dangers of Outdoor Play Safety (1999). Nowadays, she is a respectable and happily married woman with two children who have grown-up pretty well and she has turned her hand to killing plants and writing stories. She published her first novel, Changing the Subject, in 2019. Her latest book is Hausa Blue.