It’s an absolute delight to welcome William Shaw to Linda’s Book Bag to stay in with me today because I’m so looking forward to meeting William in real life for the Deepings Literary Festival in 2022. I’ve also been lucky enough to take part in one of William’s reading party events that you can find out about here. These are such good fun and there are lots of new reading parties coming up so do take a look here for the latest ones.

William writes the DS Alexandra Cupidi series of thrillers and his latest book has just been released. My thanks to Elizabeth Masters at Quercus for arranging for me to stay in virtually with William today so that I can find out more.

Staying in with William Shaw

Welcome to Linda’s Book Bag William and thank you for agreeing to stay in with me.

Thank you! Staying in has become a bit of a way of life since March 2020. I’m getting used to it.

I think we all are William. This week’s easing of restrictions feels weird!

I’ve brought along my new book, The Trawlerman. It’s just out in hardback so I’m keen to show it around. It’s the fourth in a police series set in Dungeness, which, if you haven’t been there, is a really extraordinary place. It’s a giant shingle headland – the largest in the world – created by the currents of the channel. It feels like a very precarious place. On it, in a mixture of fairly ramshackle cabins and houses, live a strange and wonderful collection of artists and eccentrics – people who have gone there because they feel something in common with this place – and I’ve added a a policewoman to the mix.

I’m ashamed to say that I haven’t been to Dungeness or read the series yet William but I have heard magnificent things about the first three books and have Salt Lane, Deadlands, Grave’s End and The Trawlerman all on my TBR. 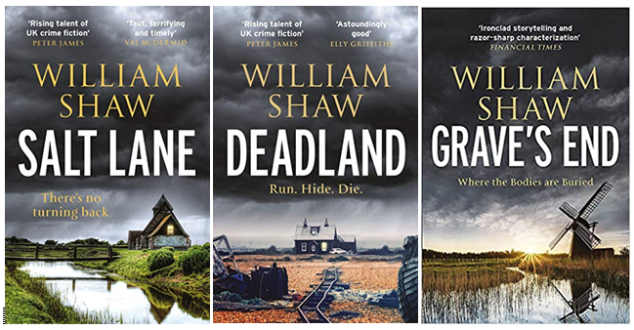 So, what can we expect from an evening in with The Trawlerman.

The series features a woman detective, Alexandra Cupidi and her teenage daughter, Zoë.

I loved hearing how Cupidi got her name the other evening William!

We’ve reached the fourth book and by now Alex has had a few chunks knocked out of her. I started thinking, what if she has PTSD? It’s a major real-life issue for serving officers who might not have been through half the stuff I’ve put Alex through. I’m aware there have been a few books written where a detective has PTSD counselling and it’s usually the meme of tough detective being cynical about the value of talking therapy. When I spoke to a pal who has served in a serious crime unit who’d been through that it seemed like the real story was totally different. This officer told me that the counselling was one of the best things that had ever happened to her. And I started to think, what about a book where counselling is good, and where by Alex understanding her mental scars she actually becomes a better detective? So I started reading about the neuroscience of PTSD and it’s totally fascinating. We’ve learned so much recently about how the brain functions, and how trauma affects us.

Wow. That sounds a fascinating premise for writing. You’re absolutely right; so many detectives have that cynicism. I think we live in a world where we need to explore other approaches. This has made me want to catch up with the series even more quickly.

I have brought along a delicious fresh Dover sole and a dry white wine. The Dover sole has been caught by a Folkestone trawler man called Luke who helped me with research for the book by taking me out on his trawler, The Valentine. The book is also about a man who disappeared at sea mysteriously. I learned a lot about fishing from him, and about how you can lose a man over the back of a boat.

What? You can’t just stop there. Hang on. You serve up the fish and wine and I’ll tell Linda’s Book Bag readers a bit more about The Trawlerman, but then you’ll need to tell me more…

Thanks so much for staying in with me today William. It’s been wonderful hearing more about The Trawlerman.

The naked corpses of Aylmer and Mary Younis are discovered in their home. The only clues are a note written in blood and an eerie report of two spectral figures departing the crime scene. Officer Jill Ferriter is charged with investigating the murders while her colleague Alex Cupidi is on leave, recovering from post-traumatic stress.

The dead couple had made investments in a green reforestry scheme in Guatemala, resulting in the loss of all their savings. What is more disturbing is that Cupidi and Ferriter’s disgraced former colleague and friend Bill South is also on the list of investors and the Younis’s were not the only losers.

Despite being in counselling and receiving official warnings to stay away from police work Cupidi finds herself dragged into the case and begins to trawl among the secrets and lies that are held in the fishing community of Folkestone. Desperate to exonerate South she finds herself murderously compromised when personal relationships cloud her judgement.

Pacey, intense and riddled with surprising twists, The Trawlermanshows that deceit can be found in the most unlikely places. The brooding waters of the Kent coastline offer an ominous backdrop for this lively page-turner of corruption, mental health and the complexities of human connection.

Published by Quercus on 13th May 2021, The Trawlerman is available through these links.

William Shaw has been shortlisted for the CWA Historical Dagger, longlisted for the Theakstons Crime Novel of the Year and nominated for a Barry Award. A regular at festivals, he organises panel talks and CWA events across the south east. His books include the acclaimed Breen & Tozer crime series set in sixties London, the newest series featuring DS Alexandra Cupidi, and the standalone bestseller The Birdwatcher. He worked as a journalist for over twenty years and lives in Brighton.

6 thoughts on “Staying in with William Shaw”