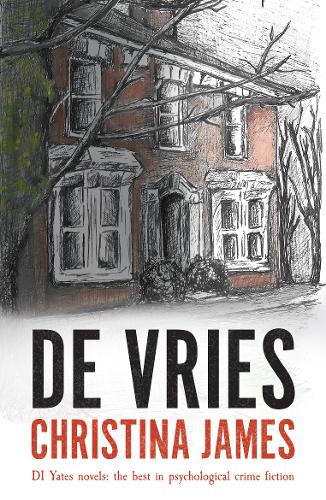 As many of you know, I’m involved in my local Deepings Literary Festival and a year ago we were hoping to hold our Read Dating event with lovely Christina James as one of our authors. We all know what happened to live book events! Consequently, I’m particularly pleased to welcome Christina to Linda’s Book Bag today to stay in with me to chat about her latest book. It feels like some compensation for not getting together in real life.

Staying in with Christina James

Welcome to Linda’s Book Bag Christina and thank you for agreeing to stay in with me.

I’ve brought De Vries which is a psychological crime novel and the ninth in the DI Yates series, all set in South Lincolnshire. It is the sequel to Sausage Hall, the third of the series – but all of the books can be read independently. 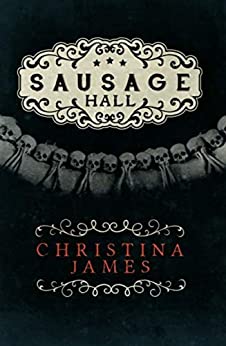 Crikey. Are there really nine books in the series now? What can we expect from an evening in with De Vries?

De Vries continues the story of Kevan de Vries, a wealthy industrialist who returns to Sutterton after seven years of exile. Kevan is a morally ambiguous character: there are several strands to the narrative, each of which adds to his complexity and the reader’s opinion of him. For example, can a murder ever be justified? Why will some people risk everything to find out who their parents were? Do old houses truly carry memories of events that have happened in them in the past?

I love the sound of exploring those questions Christina. How had De Vries been received so far?

Here is part of a review by Mickey J. Corrigan, an American author whom I greatly respect:

“DI Yates and DS Armstrong are back on the job. Drawn in by the possibility that de Vries is hiding out at Sausage Hall, they launch another one of their intuition- based investigations, only to get side-tracked when a townswoman goes missing.

Will de Vries solve his paternity mystery before the law finds him? Will he be able to explain his legal troubles to Agnes? Is the child trafficker dead – or still in business? What will the Archaeological Society dig up? And where did those old skeletons at Sausage Hall come from? Are there more?

Enquiring minds must find out, which is why I couldn’t stop reading. I greatly admire a writer who can lure me in with an addictive plot and make me fall in love with a motley group of well-drawn characters as she fits all the puzzle pieces together. I won’t say more as I don’t want to spoil your read. It’s fun by one master storyteller.”

And here is a trailer for De Vries.

I enjoyed watching that Christina – those images of Stamford were very familiar to me. 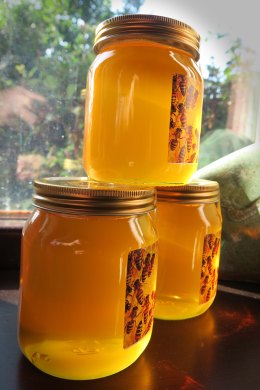 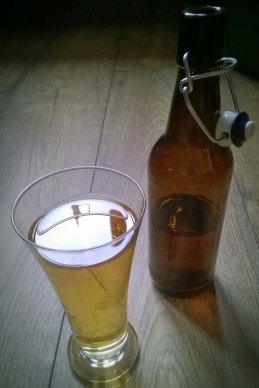 For sustenance, I have brought some jars of honey, as my husband keeps bees, and some home-made cider.

That honey looks glorious. I’ll get some fresh bread in a while when we’ve finished chatting. 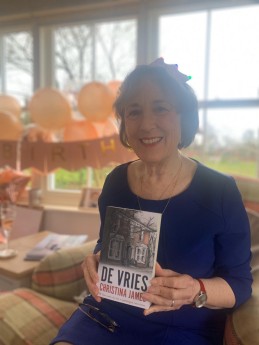 I’d also like to introduce a couple of guests: Ruth Cropley, the present owner of the house I have called ‘Sausage Hall’, and the spirit of my grandmother, Elizabeth Mary Wood. Some years after ‘Sausage Hall’ (the book) was published, Ruth tracked me down because her daughter had read it and recognised the house from the description. Her diligence in doing this and enthusiasm for my books has brought a new and highly valued friend into my life.

That’s just wonderful. Ruth is most welcome. But why your grandmother? 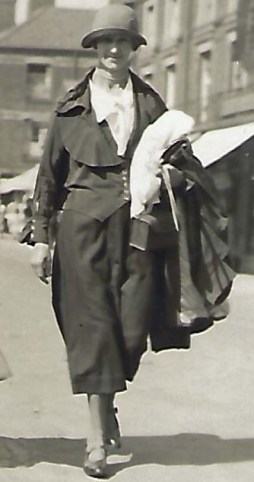 I’m bringing my grandmother because she was the paid companion/housekeeper of the old lady who owned the house in the 1950s and 1960s. Elizabeth died in 1979, but as I’m a writer among writers here I’m sure her ghostly presence will be understood and welcomed, particularly as, like Sausage Hall, De Vries raises some ancient ghosts. I know my grandmother would have been delighted to meet Ruth and fascinated by what Ruth has made of the house today. Before she worked at Sausage Hall, Elizabeth was housekeeper to Samuel Frear, the last of the great Lincolnshire sheep farmers. She was born in Kent; her father was a manager for a ‘gentleman farmer’ who also owned farms in Lincolnshire, so her family moved to an isolated farm in the Fens when she was a young woman. Like Tess of the D’Urbervilles, and at around the same time, she started work as a poultry maid. Then one of her employers sent her to Bart’s Hospital in London to train as a nursery nurse and subsequently she worked as nursemaid to the children of a Scottish diplomat, before returning to Lincolnshire in her later years. She was an indomitable lady with a wry sense of humour and fierce work ethic. I hope perhaps some of her qualities have rubbed off on me.

She sounds utterly fabulous and from what I can tell, Christina, she’d recognise many traits of herself in you.

Thank you so much for staying in with me to chat about De Vries. I think it sounds brilliant. Now, you pour the cider and I’ll tell readers more about De Vries.

He must remain incognito because police want to question him about the unexplained disappearance of Tony Sentance, former employee and leader of a child trafficking gang that operated from within De Vries Industries.

De Vries is obsessed with the identity of his father, never disclosed to him by his mother. He enlists the help of Jackie Briggs, his former housekeeper, and Jean Rook, his solicitor and erstwhile lover, who wants to rekindle their liaison. He reluctantly agrees.

De Vries is the sequel to Sausage Hall. The two novels can be read as a pair or each as a standalone text.

‘De Vries’ can be purchased from www.quoscript.co.uk, and most online booksellers on both sides of the Atlantic. 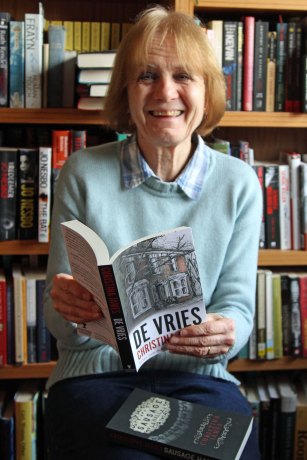 Christina James is the pseudonym of Linda Bennett, née Linda Sherrard, a former pupil of Spalding High School. She has been a book-lover for as long as she can remember – and certainly longer than when she first learnt to read. Books have always been a part of her professional life in some guise: she has worked as a library supplier, an academic, a bookseller, a publisher, an editor and a consultant for publishing and library projects.

Like many book-lovers, it was always her ambition to become a writer herself and after a couple of false starts (and a textbook along the way) she began work on the DI Yates series in 2010. Linda is married with a grown-up son. She lives on the Yorkshire side of the Pennines with her husband, a rescue cat and about three hundred thousand bees.