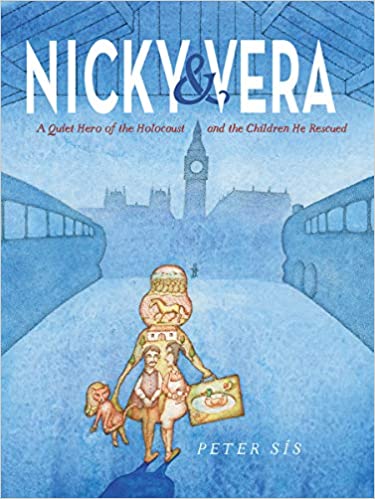 All kinds of surprise books pop through my letterbox and I try to catalogue them and read them in the order they arrive. That said, I was so drawn to Peter Sis’ children’s book Nicky & Vera that arrived unexpectedly last week that I simply had to share my review today. My enormous thanks to Oliver Wearing at Norton for sending me a copy.

In 1938, twenty-nine-year-old Nicholas Winton saved the lives of almost 700 children trapped in Nazi-occupied Czechoslovakia – a story he never told and that remained unknown until an unforgettable TV appearance in the 1980s reunited him with some of the children he saved.

Czech-American artist, MacArthur Fellow, and Andersen Award winner Peter Sís dramatises Winton’s story in this distinctive and deeply personal picture book. He intertwines Nicky’s efforts with the story of one of the children he saved a young girl named Vera, whose family enlisted Nicky’s aid when the Germans occupied their country. As the war passes and Vera grows up, she must find balance in her dual identities one her birthright, the other her choice.

Nicky & Vera is a masterful tribute to a humble man’s courageous efforts to protect Europe’s most vulnerable, and a timely portrayal of the hopes and fears of those forced to leave their homes and create new lives.

You can see Nicholas Winton meeting those he saved here.

My Review of Nicky & Vera

Oh my word. What a moving, beautiful book Nicky & Vera is. I must mention the wonderful physical quality of Peter Sis’s book. The slip cover is smooth and luxurious with flaps that give readers critical information both about the author and Nicholas Winton. Underneath the slip cover is a robust hard backed book that has the ghostly indented imprint of a train that I found very affecting. Nicky & Vera is a book that will withstand much use in the home or classroom. In the author’s note there is further information that can be read independently by more confident young readers or by older readers.

Within the pages of Nicky & Vera the story of Sir Nicholas Winton and one of the children he rescued, Vera Gissing, is simply written with an accessible font and sentence structure. This simplicity not only makes the book appeal to young readers, but it enhances the depth of the story too by way of contrast between presentation and subject. What Peter Sis has managed to do is to bring to life, and make personal, a story that was reality to so many during WW2. Indeed, although I understand the reading age of the story is around 6-8, the manner of presentation means this book would afford the opportunity for older, less confident, readers to succeed in reading a complete book and gain a positive sense of success.

However, it is the illustrations that are magical in conveying the real narrative. There’s a softness and ghostliness to them that is so moving. It feels slightly embarrassing to say that an illustration in a child’s picture book moved me to tears, but when I turned the page to see the pictures of the children Nicholas Winton saved within the adults standing up for him, it really brought home to me just what a hero this man was. As Peter Sis himself says, we talk very loosely about heroes – a young man scoring a goal in football perhaps, or a cricketer scoring a century, but Nicky & Vera teaches children (and adults) the true meaning of the word – Nicholas Winton was an unassuming young man whose actions saved the lives of 669 children. That’s a real hero.

Nicky & Vera is a lovely, lovely book. It is historically accurate, engaging, beautifully illustrated and very moving. Peter Sis has created a book that will endure every much as well as Raymond Briggs’ When the Wind Blows and is every bit as important.

Peter Sís is the Czech-born author/illustrator of three Caldecott Honor books, including The Wall, which also won the Sibert Medal. He is the first children’s book illustrator to win the MacArthur Fellowship, and also won the Hans Christian Andersen Award. He lives in Irvington, New York.