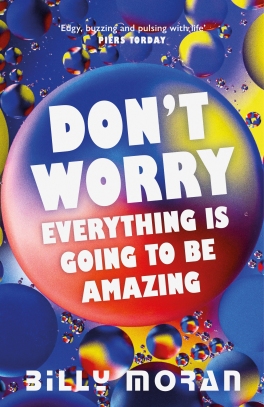 It’s some weeks since I stayed in with Billy Moran to chat about Don’t Worry, Everything Is Going To Be Amazing in a post you can see here. Having so enjoyed that evening, when Howard Davidson at Sauce Materials Books asked if I’d like to participate in this new blog tour, I couldn’t resist. I’m delighted to share a guest post from Billy today, all about 10 Amazing Books, Which ‘Everyone’ Read in the 90s.

Don’t Worry, Everything Is Going To Be Amazing… is available for purchase from Amazon, Waterstones and Bookbub.

Don’t Worry, Everything Is Going To Be Amazing 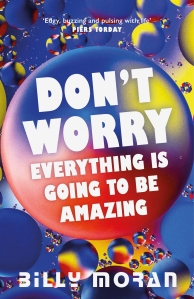 Don’t Worry, Everything Is Going To Be Amazing…

Propped up by biscuits, benefits and a baffling faith in his plan, he lives in a world where every day is obsessively the same: wedged in his recliner, watching murder mysteries, taking notes. Until the day a serious and peculiar crime stumps the local police – and Chris announces he can solve it.

Accompanied by a loyal crew of chancers, committed to making amends, and pursued by a depressed Detective Inspector, trying to join the dots, Chris heads back to the raves of his past, where a heart breaking personal tragedy lies abandoned. But what exactly is Chris Pringle looking for? Has he really worked out the way to find it? And what will happen if he does?

10 Amazing Books, Which ‘Everyone’ Read in the 90s

When you’re as old as Linda and I are – Linda said this to me, don’t be cross! – along with getting seats on buses, once of the positives, is that you can talk about the 80s and 90s, and people at least might believe you were actually there. So here I am on a hugely popular book blog, followed by all sorts of people of all sorts of ages, making foolish claims – foolish, because of course there aren’t really books which ‘everyone’ read in the 90s…and there will be some of the below which many of you who are old enough definitely did not read – because this is a slightly personal list too, covering the cult and the mainstream, the cuddly and the rebellious, and my love of books which take you into some brilliantly drawn ordinary lives and tell you an extraordinary story – or vice versa.

This year, I finally had my debut mystery novel published. It’s been a real high point in what has otherwise been a rubbish few months, for Covid and other reasons. Don’t Worry, Everything Is Going To Be Amazing is set partly in the 1990s, and entirely inspired by my experiences at that time, with a murder mystery thrown into the mix. I hope this selection of 90s reads gives you an idea of how much that time inspired me, but also of the questions it posed me which I’ve been trying to answer ever since, namely – how exactly do you go about being happy, when your past let you down? A decade is a long time and a lot can happen – we’ve had a pretty bad start to this one, but I think that bodes really well for what might happen next.

Whether you’ve read all these books before or none of them, I hope there’s something in here for you – because if there is, I think you might like my book too. Happy reading! Billy.

An evocative, beautiful love story and episode in European history rolled into one, this is the book that spawned a zillion Kefalonian holidays (guilty), making it one of the all-time great beach reads.

Irvine Welsh’s breakthrough novel doesn’t sound a likely candidate for a decade-defining book – the misadventures of a bunch of heroin addicts – but its richly-drawn cast of characters (who transferred so well to the big screen in Danny Boyle’s film adaptation), and gritty, concise and darkly hilarious colloquial language, somehow captured the imagination of a niche, largely non-reading audience, before then going big. While Generation X– a much better book than the hype and bright pink cover may suggest – attempted to speak for a generation, the protagonists of Trainspotting had little they wanted to say, apart from leading light Mark Renton. They were a nihilistic bunch, each with their own cod philosophy sure – violence (Begbie), selfishness (Sick Boy) failure (Spud) – but together they simply believed not that life had picked on them, but that it was rubbish. The rave scene that inspires Don’t Worry, Everything Is Going To Be Amazing was born of the same disillusionment, but came with the hope that if everyone was left alone to pull together, life could actually be not just better, but amazing.

I’m not sure you can get more 90s than Bridget Jones – an ordinary girl flailing around in a supposedly feel-good, upwardly mobile era, which is really delivering her nothing in the way of substance. Rene Zelwegger’s stellar big-screen method performance has done the book’s timeless longevity no harm at all, but Helen Fielding’s book truly does capture the 90s, in this funny, touching modern British classic.

The Secret History by Donna Tartt

This one had a long tail – it was maybe as big in the 00s as it was in the 90s, and that reflects its status as a slow burner classic. This is a book which truly stayed with me. It slowly immerses you in gathering claustrophobia and pulls you under – it’s a cold, creepy winter book, and you’ll find yourself thinking about it for a long time afterwards. I loved The Goldfinch, but for me, it wasn’t a patch on this.

Harry Potter and the Philosopher’s Stone by JK Rowling

Harry cannot be omitted from this list – arguably the second book in the series deserves a place, because it was the queuing up for its release which turned JK Rowling into the global celebrity she is today, but I’ve gone for her debut outing, where it all began. I’ll always love great kids’ books – part of the magic of fiction for me is the recapturing of the wide-eyed wonder I felt when I first fell in love with reading (under the covers, with a torch and Fantastic Mr Fox).  A shout-out also goes then to Northern Lights(and Artemis Fowl slightly later) for backing JK up, and helping launch an era of truly great kids fantasy writing.

This cult YA novella grew to be a global phenomenon like Wonder did may years later. I loved its neat little story.

Memoirs of a Geisha by Arthur Golden

This classy tome captured imaginations worldwide with its intricate descriptions of life inside a Japanese Geisha house.

This immediately felt like a classic, and to many, will immediately feel like a classic from the 80s, because of its ‘banker’ protagonist and his world of excess.  But the timing of its release (1991) is telling. Like all the best writers, Bret Easton Ellis doesn’t just reflect times past, he predicts times to come. For me, the hopefulness of the early 90speaked in 1992, an idea central to Don’t Worry, Everything Is Going To Be Amazing. The joy of liberation that 1988-1989 generated across the world, eventually got hijacked by the power-and-money hungry, and 1993-1997 (the Loaded magazine/Brit Pop years which gave birth to the celebrity culture we know today), saw life getting more and more conservative, and less and less kind. American Psycho’s protagonist is a psychopath – no-one’s to blame for that, he is not a product of his times – but whilst Wall Street’s Gordon Gekko reflected greed, Patrick Bateman tells the darker story of what often comes after hope.

High Fidelity or Fever Pitch? A tough choice for me: music or football? I’ve chosen music because my own book is inspired by music, and it appeals to my not-so inner geek, and the fantasy me and all my mates had of spending our lives hanging around record shops, trying to be cool but failing drastically, as real life passed us by. Good times!

No Logo by Naomi Klein

And finally I’m going off piste a bit – please don’t be piste off. No Logo is non-fiction, but its status as one the first books to successfully challenge the negative aspects of globalisation- negatives which sadly remain very much in effect, 25 years later – is undeniable. I thought of going for Prozac Nation for my non-fiction 90s entry – but that felt less relevant to me, or to life in Britain.

Thanks so much Billy. Fascinating choices. I’ve only read five of these books but you’ll just have to guess which ones they are! 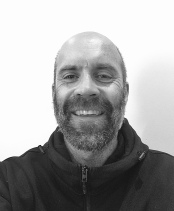 Billy Moran is an award-winning television writer for shows including Horrible Histories. He grew up in the West Country, where his teenage years were rudely interrupted by the Second Summer of Love. Since then he has been embracing mysteries, craving solutions and writing lots of lists. He lives in London and has two children, two cats, one football team and several favourite detectives. Don’t Worry, Everything Is Going To Be Amazing is his debut novel.

You can find Billy on Goodreads. 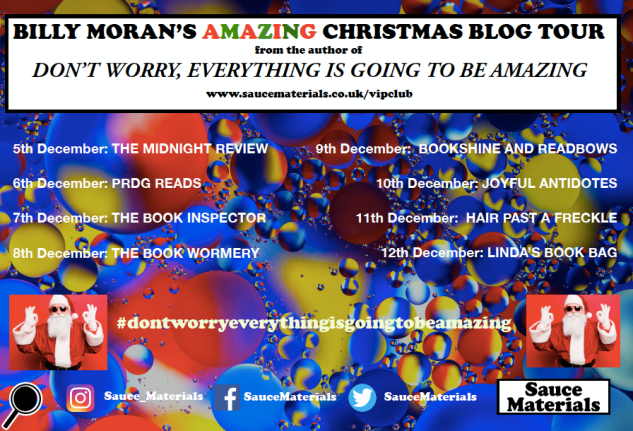 15 thoughts on “10 Amazing Books, Which ‘Everyone’ Read in the 90s: A Guest Post by Billy Moran, Author of Don’t Worry, Everything is Going to Be Amazing”