It’s almost two years to the day that Elizabeth Jade stayed in with me when her first Akea book, Akea: The Power of Destiny, was published, and you can read that post here. Now, with an adult niece who, at the age of almost 40, has just been diagnosed as dealing with autism, I was fascinated to see how Elizabeth Jade’s own Asperger’s has affected her as a writer and a person so I invited her to write a guest post for Linda’s Book Bag explaining a bit about it. Luckily she agreed and I’m delighted to share that post with you today. Since last she was here, Elizabeth Jade’s has published a second Akea book, Akea: His Mother’s Son.

Akea: The Power of Destiny

Akea is born into a family of sled dogs and a life that follows a predictable path, but from the day she first sees the lone wolf, Kazakh, Akea knows her future lies beyond the safety of her home. Kazakh is well aware of Akea’s destiny and the pack laws he will break to help her reach it. Regardless of the challenges ahead, he must make sure this young husky will be ready, even if it means his life. 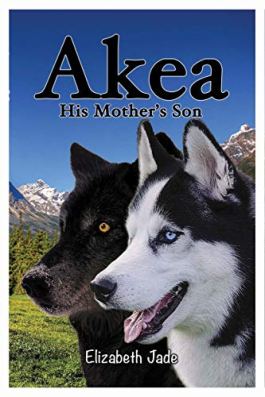 The heart-wrenching sequel to Akea – The Power of Destiny. Akea is no ordinary husky and taking her place as Wolf Queen was just the first step in the journey set out for her by the Great Wolf. Akea’s world turns upside down when humans raid their home, scattering the pack and capturing her hybrid son. Salvador struggles to adjust to a life in captivity quickly realising not everyone approves of his mother’s rise to Wolf Queen. When the Great Wolf sends him warning dreams, Salvador discovers his true purpose for being there.

I started school in 2002, and by the time I was 7, the kids were bullying me; the teachers said I needed to pay more attention; and I would go home and relate what everyone had been doing in detail, but hadn’t a clue what the lessons were about. I waited a term and a half for the teaching assistant I was told I needed, but never received it. By this stage, the stress from being at school was making me physically unwell and my parents decided to keep me at home.

I struggled with depression and anxiety in my teens and was referred to the children’s mental health team. While I found this an unpleasant experience, it was here the possibility of Aspergers was suggested, leading to my diagnosis when I was 18. As anxiety and depression are often found alongside Aspergers, it’s difficult to say if they are related to my autism or the result of my struggles in school; perhaps it’s a little of both.

Initially, I think I was relieved to know there was a reason for the struggles I had experienced in my life. I had spent a long time trying to fit in and measure up to what behaviour was expected by society. I had spent years wondering what was the matter with me, why everything I did always seemed to be wrong, and if I would ever achieve anything with my life. While I was relieved that I wasn’t alone in experiencing these struggles, I resented the fact that the school’s Special Educational Needs Co-ordinator hadn’t spotted my Aspergers. My school life could have been much easier, and I may not have struggled so much with my mental health if I had received an earlier diagnosis and the support that goes with it. But I guess people weren’t really aware of the signs of this type of autism in girls when I was at school, compared to the level of awareness around the time I was diagnosed.

People have been campaigning about autism awareness for some time now, and ‘autism awareness’ as a phrase is now falling out of use in favour of ‘autism acceptance’, which is important because it doesn’t really matter how aware people are if it doesn’t change the way they behave. The number of autism charities and support groups show there is still progress to be made, but many schools are now working to foster acceptance of all kinds of differences in their pupils. 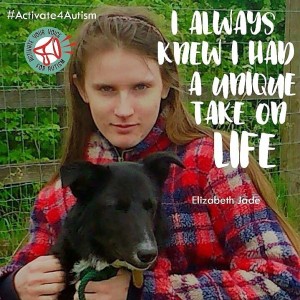 When I published the first book in my Akea series, I decided to take a gamble and include my autism and mental health diagnosis in both the author’s bio section and any newspaper articles about me. The reaction was better than I could have hoped for. Some people were encouraged because I had spoken about the struggle with my mental health, and one man actually stopped to thank me for mentioning it in a recent article in the local paper. Others were keen to accept that I had Aspergers and wanted to actively support me. I ended up supplying A5 display stands entitled ‘The Aspie Author’, to be placed next to my books in local bookshops. This turned out to be a really good way to be noticed as people often go into a book shop with a specific purchase in mind, and as a new author it’s easy to be overlooked. But people were drawn to the displays, read the information on them, and then picked up the book to read the blurb. People do seem to be a lot more understanding and supportive than they were while I was growing up.

An example of a new level of acceptance in schools can be seen in Oldfield Park Junior School in Bath. This year they have named their classes after literary figures. Some famous names like AA Milne and Dr Seuss were chosen. While other authors, such as Benjamin Zephaniah, were chosen because they had overcome challenges like dyslexia and would be positive examples for the children. As it happens, they also named a class after me. This came as a bit of a shock, and I still don’t know how they even heard about me.

According to the teacher of ‘Elizabeth Jade’ class, she would have two autistic children in her class, two who were currently in the diagnosis phase, and one child with severe hearing loss. And I was chosen to be an inspiration to those in the class with additional challenges. They will also be reading my books and using them as a basis for classroom discussion on acceptance. I never imagined my books could be used as a basis for classroom discussions like that, but then I hadn’t realised my stories contained such important lessons until some of my readers pointed this out to me. 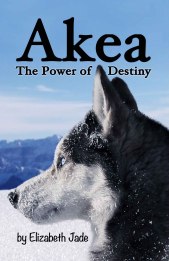 In Akea – The Power of Destiny, Akea always felt different, even though she didn’t know why, and when she sees a lone wolf by the name of Kazakh, she understands that her true destiny lies beyond the relative safety of her sled dog family. Kazakh’s role is to help her discover her place in the world, but doing so goes against the rules and norms of wolf society. Each obstacle that Akea overcomes makes her stronger and brings her closer to her goal, until she finally ends up fitting in where she physically stands out the most, and is accepted by both the wolves and the family she left behind.

The themes of belonging, acceptance and overcoming obstacles were not something I had consciously included, it seems my own desire to be accepted and understood had indeed been woven into the story. Discovering this made me look more closely at the second Akea story I had written, and I discovered I had woven similar themes into this one too. 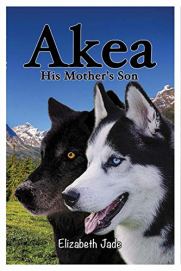 In Akea – His Mother’s Son, Akea’s wolf-dog son, Salvador, is captured by humans and taken to a wildlife park where he is shunned as a ‘mongrel’ by the first wolf he meets there. On learning of a threat to his family (I won’t tell you how – that would spoil it) he must convince her and the other wolves to accept his leadership, escape with him, and return in time to save his pack. So essentially, you have the same issues of acceptance and overcoming obstacles. But, of course, it’s not just Salvador that has to adjust to being separated from his family. Akea and the rest of the wolf pack have to come to terms with the loss of Salvador. So this second book has the addition of a dual narrative which allows the reader to see both sides of this experience of loss and change too.

While I liked the idea that learning about me and my books could be a source of encouragement to the children in EJ Class, I wanted to go a little further than that. So, I wrote to the class to personally encourage them to look for what makes each of them different, to celebrate that as a good thing, and to look for ways in which they could encourage and support one another. I was delighted to receive almost thirty letters and pictures in reply, and I plan to keep in touch with them, so I can encourage them further.

We would live in a very dull world if everyone were the same, yet we spend a lot of our childhood trying to fit in. From personal experience, I know how mentally and physically exhausting it can be to do that. What we need is not just for everyone to be aware of the unique individuals that make up this world, and not just to accept the things that make each of us different. We need to move beyond that and celebrate those differences. And this applies to all forms of autism, disability, special needs, and so on. Everybody matters!

Those of you who watched Britain’s Got Talent this year, will have seen the Sign Along With Us Choir. That is the sort of acceptance and celebration that we need in the world, and maybe as we move beyond the crazy year that 2020 has been, we may actually get to see it.

What a truly inspirational post. Thank you so much for taking the time to write it and all the very best with your Akea series of books. I think they are exactly what the world needs right now. Congratulations on all you’ve achieved and good luck with your writing.

Elizabeth Jade was born in 1998 and lives with her family in Wellington, in the county of Somerset in the UK. She was home-schooled from the age of 7, but only recently discovered that her struggles in school were due to Aspergers.

She stumbled into writing at the age of 14 when she began to struggle with depression and anxiety, and quickly found her story ideas pouring out faster than she could get them onto paper. She has always had a passion for animals, being known as ‘The Cat Whisperer’ by the staff at the animal rescue where she volunteers, so it seemed only natural that her stories would revolve around them.

With further adventures for Akea already written in her head, a wonderful journey is set to unfold for both reader and author alike. “I don’t write stories,” she says, “I just put a bunch of words onto paper and the characters do the rest. Plot twists are never planned, they just happen. If you let your imagination run riot, trust me, you’ll be surprised at the result, I always am.”