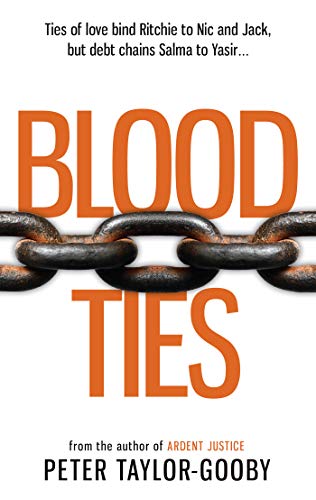 Earlier this year I was lucky enough to ‘stay in’ with Peter Taylor-Gooby in a post you can read here. We chatted about Blood Ties which I’m delighted to be reviewing today as part of the Love Books Group blog tour. It’s a privilege to help start it off. My thanks to Kelly for inviting me to participate.

Blood Ties is about love, betrayal and compassion. Ritchie, a successful advertising executive, is blackmailed into leading a campaign to make modern slavery acceptable to the public. His children, activists in the struggle against people-trafficking, are horrified. The novel tells of his journey through a Britain where rich and poor live as close and as distant as the cheeks of the blade of an axe, and how he finds that it is only through self-sacrifice that he can reunite his family.

Blood Ties is currently available in e-book from all online sellers including here.

My Review of Blood Ties

Blood Ties is absolutely brilliant. I loved it.

Peter Taylor-Gooby writes with erudite style, intelligence and pitch perfect plotting, but above all that, he writes with humanity so that whilst his reader is entertained, they are educated and affected too. The themes of Blood Ties are incredibly pertinent to Britain today, with modern slavery, political corruption and family relationships at the very heart of the writing. And heart is the correct term. The author displays such moral empathy whilst crafting a brilliant thriller of a book. However, none of the story is self-righteous, so that its impact is all the more powerful. I genuinely felt ashamed of my lack of knowledge of some of the subject matter and hugely grateful for the comfortable, privileged life I have. Blood Ties is a book with real, emotional impact. It has come as no surprise to me to discover that Peter Taylor-Gooby is both a Professor of Social Policy and has an OBE for services to social science, as the authenticity of Blood Ties is astounding.

The plot zips along at breakneck, thrilling speed but manages to retain complete credibility so that I couldn’t trust the narrative not to move on without me if I put the book down. I was completely captivated and in fact read Blood Ties in one sitting. There’s an episodic nature the the story that would make a simply fabulous television series. I think Blood Ties is a book that needs championing in every quarter to bring it to as wide a readership as possible.

Peter Taylor-Gooby has a deft touch in imparting textual details that enliven the prose but don’t cause a break in the pace. I found Blood Ties surprisingly visual and this effect enhanced my enjoyment still further. I loved the variety of sentence structure, the natural dialogue and how brilliantly meaning is conveyed just as effectively by what is withheld as by what is revealed. I confess I was moved to tears more than once.

The characters are all wonderfully drawn, but it is Ritchie’s first person voice that rings out so clearly making him completely compelling. I finished reading Blood Ties feeling I wanted to sit down with Ritchie, talk through the events and issues he’d told me about and to support him in any way I can.

Blood Ties is thriller with a moral conscience that never preaches, but rather grips the reader to the extent they feel they are sitting on Ritchie’s shoulder in the thick of the action throughout. Blood Ties is splendid in every respect and I cannot recommend it highly enough.

Peter enjoys talking to his children, holidays, hill-walking and riding his bike. He has worked on adventure playgrounds, as a teacher, as an antique dealer and in a social security office in Newcastle. Before that Peter spent a year on a Gandhian Ashram in Vijayawada, supporting himself as assistant editor on a local English-language newspaper. In his day job Peter is an academic but believes that you can only truly understand the issues that matter to people through your feelings, your imagination and your compassion. That’s why he writes novels.

His first novel, The Baby Auction, 2017, is a love story set in a fantasy world where the only rule is the law of the market. That someone should help another because they care for them simply doesn’t make sense to the citizens of Market World, any more that auctioning babies might to us. His second, Ardent Justice, 2018, is a crime story set in the world of high finance and city fat-cats, where money rules, but greed can trip even the most successful. Peter’s latest book, Blood Ties, 2020, is about the ties of love in a troubled family, and the bonds of debt that chain illegal immigrants to people-traffickers, and how they can be broken through self-sacrifice. He hopes you enjoy them.