It’s a few years since I was first overawed by meeting Mike Gayle at one of those glorious rooftop book events at Carmelite House, so featuring Mike’s latest book, All the Lonely People, here today, is some compensation as those events can’t go ahead at the moment. I am trying to persuade Mike to be part of the Deepings Literary Festival next year so you never know! My grateful thanks to Jenny Platt for inviting me to participate in the All The Lonely People blog tour and for sending me a copy of the book in return for an honest review.

All the Lonely People is available for purchase here.

All the Lonely People 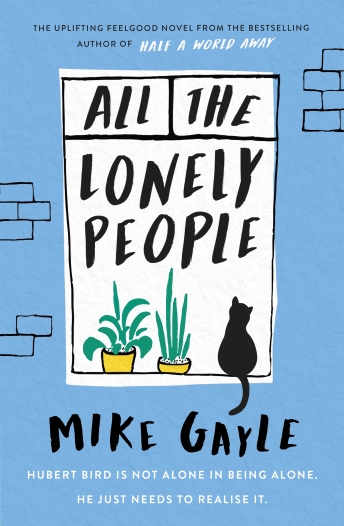 Hubert Bird is not alone in being alone.

He just needs to realise it

In weekly phone calls to his daughter in Australia, widower Hubert Bird paints a picture of the perfect retirement, packed with fun, friendship and fulfilment.

But Hubert Bird is lying.

The truth is day after day drags by without him seeing a single soul.

Until, that is, he receives some good news – good news that in one way turns out to be the worst news ever, news that will force him out again, into a world he has long since turned his back on.

Now Hubert faces a seemingly impossible task: to make his real life resemble his fake life before the truth comes out.
Along the way Hubert stumbles across a second chance at love, renews a cherished friendship and finds himself roped into an audacious community scheme that seeks to end loneliness once and for all . . .

Life is certainly beginning to happen to Hubert Bird. But with the origin of his earlier isolation always lurking in the shadows will he ever get to live the life he’s pretended to have for so long?

My Review of All the Lonely People

Hubert Bird is living a life of loneliness.

There isn’t the dramatic fast paced plot that writhes with tortuous twists and turns that so many books rely on in All the Lonely People, but instead Mike Gayle presents a simultaneously heart-breaking and uplifting insight into humanity through a completely plausible, and therefore all the more compelling, narrative that hooked me, held me and changed me. I feel a better person for the experience of reading this book. All the Lonely People made me fully appreciate my own life.

I fell in love with Hubert Bird instantly. His direct speech develops his character so convincingly. I think the fact his name was my wonderful, much missed Dad’s middle name, predisposed me to think positively of him, but it’s more than that. Hubert is a true gentleman, an Everyman of the modern era, but he is also realistically flawed, stubborn, proud and doesn’t always help himself. As result I wanted to crawl into the pages of All the Lonely People and hug him tightly. I think he’ll remain with me for a very long time.

However, All the Lonely People is so much more than character and plot. The setting and the people in it could be transported to any area because the themes are so utterly relevant to modern society. It’s difficult to define just how Mike Gayle has done so, but he has shone a light onto the very fabric of modern Britain, found it wanting and offered a possible solution that I genuinely believe could change lives for the better. A sense of community, of belonging, and the means to achieve it, is woven throughout this fabulous book in a way that touches the heart of the reader.

Other themes of love, family, relationships, racism, class, mental health, employment to name but a few, swirl through the writing, especially in Hubert’s early life in Britain, having arrived from Jamaica, so that there is an element to resonate with every reader. Although secondary to the action, I found Hubert’s relationship with David, for example, incredibly affecting. The themes of All the Lonely People are so pertinent and so sensitively handled. It’s heartbreaking to think much of the prejudice Hubert experienced on arrival in London still lurks in our society and so many are experiencing the loneliness he finds in his life.

All the Lonely People is a gorgeous exploration of love, friendship and community that I cannot praise highly enough. I feel privileged to have read it. I thought it was utterly wonderful. 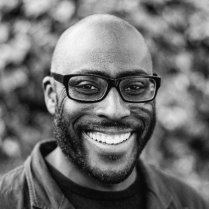 Mike Gayle was born and raised in Birmingham. After graduating from Salford University with a degree in Sociology, he moved to London to pursue a career in journalism and worked as a Features Editor and agony uncle. He has written for a variety of publications including The Sunday Times, the Guardian and Cosmopolitan. Mike became a full time novelist in 1997 following the publication of his Sunday Times top ten bestseller My Legendary Girlfriend, which was hailed by the Independent as ‘full of belly laughs and painfully acute observations,’ and by The Times as ‘a funny, frank account of a hopeless romantic’. Since then he has written thirteen novels including Mr Commitment, Turning Thirty and The Man I Think I Know. His books have been translated into more than thirty languages. 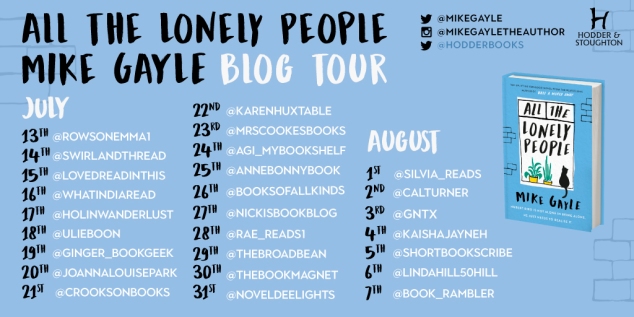 19 thoughts on “All The Lonely People by Mike Gayle”