I can’t believe it’s heading for four years since Gilli Allan last featured on Linda’s Book Bag. Then I was interviewing Gilli about her writing in general and you can read what she told me here. Today, I’m enormously pleased that Gilli has agreed to stay in with me to chat about one of her books in more detail.

Staying in with Gilli Allan

Welcome back to Linda’s Book Bag, Gilli and thank you for agreeing to stay in with me.

It’s a complete pleasure, Linda.  Although now I’m here, are we going to have to isolate together for the foreseeable?

That’s a good question! I think I’m Covid free and I hope you are too. As long as we stay 2m apart in the garden we should be OK.

So, tell me, which of your books have you brought along to share this evening and why have you chosen it?

I’ve brought BURIED TREASURE because it has just had a face lift – in other words a new, professionally designed cover – and it has gone into paperback. So, I am very excited.

Who isn’t fascinated by the concept? When I was a child the chance of discovering treasure was the most desirable thing I could imagine. And where to find it should be easy.  All you needed was to locate the point a rainbow touched earth, or maybe find a magic lamp or a fairy godmother. The fairy-tale notion of treasure was later superseded by the real possibility of coming upon a pirates’ map, or a cave in Cornwall where a smugglers chest might still be hidden, undiscovered.

Archaeology – the nearest ‘ology’ to treasure-hunting – has been a fascination since childhood.  In fact, my family has a connection to the Mildenhall treasure. The famous hoard of Roman silver tableware was discovered – in his account – by my great uncle, Sydney Ford. You can find out more here.

Wow. That’s fantastic. I’m obsessed with the buried treasure concept and would love to have that kind of connection.

Archaeology remains a fascination.  I have gone on digs and I have provided archaeological illustrations for several books, either written by, or contributed to by my son Thomas Williams. So, it was an obvious theme when I came to consider the plot of my seventh novel, BURIED TREASURE.

I have Roman coins and have been on a dig too Gilli so understand exactly what you mean.

While accurately reflecting a material element my book, I hope readers will not be too disappointed to discover the title is a bit of a tease. Buried Treasure can also be understood as a metaphor about burying the past, and the damage that suppression can have on the present. It can seem easier to internalize hurt and humiliation, and erect barriers against the world, but it is only by trusting again, and exposing your mistakes to the light, that you can rediscover the best of yourself.

Oh I think we all do that to a certain degree. I’m sure readers will identify with that theme. So, tell me more.

Jane Smith is hyper-sensitive about her lack of education, and damaged by a disastrous relationship which started when she was still a teenager.  She is constantly driven to shore up her fragile self-esteem and to prove herself by getting everything she does “right”. In the early stages of carving out a career as an Events Organizer, Jane arrives at Lancaster College (part of an ancient university) to scope it out as a possible venue for a conference she is organizing.

Theo Tyler is a ‘desk’ archaeologist working as a part-time teacher at Lancaster College. His family background makes him a curiosity to some – had his mother not been a rebel his own passage through life would have been gilded. The reality was chaotic and further marred by a destructive relationship.  He hates people’s fascination in his parentage rather than in his present achievements.

There is no necessity for Jane and Theo ever to meet. He is part of the faculty, but she is there to meet and be shown around by the hospitality manager, so their first encounter is unplanned and unpromising, but….

Jane has a family connection to a significant historic archaeological discovery and Theo wants to organize a conference.

The story follows the gradual interweaving of their interests and the breaking-down of their preconceptions.  The unlikely friendship that grows up between them leads to a place neither expected, proving that treasure is not always what it seems.

I love the sound of BURIED TREASURE Gilli. I’m intrigued.

I’ve brought my drawing board. Art is the other significant pillar of my life.  I was an illustrator in advertising, and gave it up when I became a mother and resumed my teenage hobby of writing.  I have kept my hand-in over the years by going to a life drawing class and producing an annual Christmas card, plus other intermittent commissions.

I’m so jealous. I don’t have an artistic bone in my body. I wish I could draw. 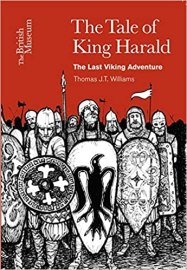 More recently my son, Thomas Williams, inveigled me into providing illustrations for his debut as an author of the children’s book The Tale of King Harald (the Viking king whom our own king Harold defeated at Stamford Bridge before his own defeat at Hastings.)

And after that, providing a few illustrations for his adult book VIKING BRITAIN, and for REPRESENTING BEASTS in EARLY MEDIEVAL ENGLAND and SCANDINAVIA, which he contributed to and edited.

Needless to say, his expertise helped inform the plot of BURIED TREASURE, and he was the source of the great majority of my research on its archaeological strand.

It must be brilliant to have such talent in the family and to work together on projects Gilli. It’s been fascinating staying in with you. Thanks so much for being here. I love the new look of BURIED TREASURE and I’ll just give blog readers a few more details:

“I found Buried Treasure a compelling read. It was so many things: a love story, a hunt for clues to lost secrets, and a fascinating look at how our past experiences shape us, and how we can heal even after damage. The characters were wonderfully well drawn. ”

Jane thinks he sees her as shallow and ill-educated. Theo thinks she sees him as a snob, stuffy and out of touch.

Within the ancient precincts of the university the first encounter between the conference planner and the academic is accidental and unpromising. Just as well there’s no reason for them ever to meet again. But behind the armour they’ve each constructed from old scars, they’ve more in common than divides them. Both have an archaeological puzzle they are driven to solve.

As their stories intertwine, their quest to uncover the past unearths more than expected.

Gilli Allan began to write in childhood – a hobby pursued throughout her teenage years. Writing was only abandoned when she left home, and real life supplanted the imaginary kind.

After a few false starts she worked longest and most happily as an illustrator in advertising and only began writing again when she became a mother.

Living in Gloucestershire with her husband Geoff, Gilli is still a keen artist. She draws and paints and has now moved into book illustration.

All of her recent books TORN, LIFE CLASS, FLY or FALL and BURIED TREASURE have gained ‘Chill with a Book’ awards.

Following in the family tradition, her son, historian Thomas Williams, is now also a writer.

You can find out more about Gilli by following her on Twitter @gilliallan, finding her on Facebook or reading her blog.

3 thoughts on “Staying in with Gilli Allan”