Lovely Poppy Stimpson at Pushkin Press has sent me several of their super new series of children’s books for review and I am extremely grateful to her this time for a surprise copy of Duncan Versus the Googleys by Kate Milner.

Duncan Versus the Googleys is available for purchase in all the usual places including directly from the publisher here. 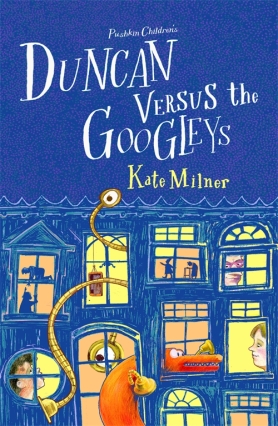 A quirky and hilarious debut about scheming old ladies, mechanical monsters and fearless children from an award-winning illustrator.

Summer is not looking good for Duncan. His parents have left him with his Great Aunt Harriet at Arthritis Hall, a retirement community of rude old ladies who confiscate his games, stuff him in a windowless room and just want him to keep quiet.

When Duncan meets Ursula, the caretaker’s daughter, he begins to discover the diabolical secrets that lurk in the shadows of Arthritis Hall. Soon, the two children find themselves embroiled in a plot involving bizarre electronic creatures and acts of ingenious thievery, in an attempt to outwit a fiendish group of eldery criminal masterminds.

My Review of Duncan Versus the Googleys

Duncan’s parents are off to Japan so he’s staying with Aunt Harriet.

What a super book for children. There’s everything that appeals in a fast paced, exciting story that is the kind of adventure any child can relate to. I’d love to see Duncan Versus the Googleys taken up as a children’s television series as there’s so much episodic action that it would lend itself perfectly. Those episodes are also perfect for young independent readers because a small chunk of text can be read containing so much going on that readers of any age are hooked immediately. The structure is quite complex at times, until all the elements are brought together, and I think this will really appeal to stronger independent readers, but those requiring more help or having the story read with, or to, them will love it all the same.

The setting is wonderful in Duncan Versus the Googleys. There’s very much an inclusion of traditional haunted houses but with a fresh and modern update through the theme of technology and cyber-pet crazes. Creepy Arthritis Hall has secret tunnels, curious inhabitants and something dangerous lurking, making for an imaginative and engrossing narrative with just the right amount of scariness.

I thought the characters were so good too. There’s a smashing balance between Duncan and Ursula so that the story will appeal to male and female readers. I liked the way their backgrounds and personalities are so very different but that they still manage to forge a friendship and alliance anyway. This is an important lesson for children. Including peripheral characters in other parts of the world broadens young minds at the same time as entertaining them too.

However, setting and character aside, the entire story of Duncan Versus the Googleys is so engaging. Ursula and Duncan face peril and danger and yet there is humour too. Villains and crooks, wildlife television programmes, megalomaniacs, knitting, monsters and children’s toys lead to a most imaginative narrative that I thought was wonderful.

Duncan Versus the Googleys is absolutely crackers, brilliantly written and so entertaining that children of all ages will adore it. I loved it.

Kate Milner is a writer and illustrator based in Bedfordshire with her husband and son. In her career she has painted pub signs and made prints, been a teacher and a carer. When working at her local library, she fell in love with children’s books and went on to become an illustrator, winning the Klaus Fugge Award for her picture book My Name is Not Refugee. Duncan Versus the Googleys is her first novel.

6 thoughts on “Duncan Versus the Googleys by Kate Milner”