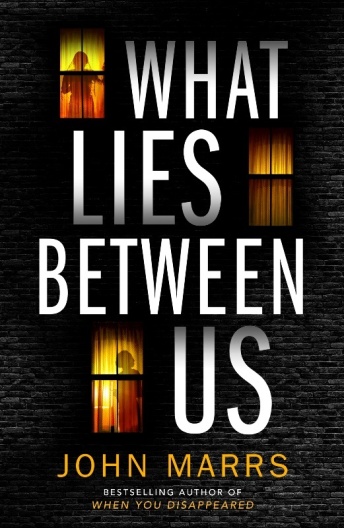 It is far, far too long since John Marrs has featured here on Linda’s Book Bag and I am thrilled to be able to share my review of John’s latest book, What Lies Between Us for the blog tour today. My enormous thanks to Sophie Goodfellow for inviting me to participate. It’s a real honour to be closing the tour.

It’s over three years since I reviewed John’s The One here, and interviewed him about The One here. When John’s The Good Samaritan was published he provided a cracking guest post that you can read here too.

Published by Thomas and Mercer on 15th May 2020, What Lies Between Us is available for purchase here.

What Lies Between Us

Nina can never forgive Maggie for what she did. And she can never let her leave.

They say every house has its secrets, and the house that Maggie and Nina have shared for so long is no different. Except that these secrets are not buried in the past.

Every other night, Maggie and Nina have dinner together. When they are finished, Nina helps Maggie back to her room in the attic, and into the heavy chain that keeps her there. Because Maggie has done things to Nina that can’t ever be forgiven, and now she is paying the price.

But there are many things about the past that Nina doesn’t know, and Maggie is going to keep it that way—even if it kills her.

Because in this house, the truth is more dangerous than lies.

My Review of What Lies Between Us

Maggie and Nina are in a war of attrition.

Oh. My. Word. Now I have absolutely no idea how I’m going to review What Lies Between Us because anything I write may act as a spoiler for other readers. There is so much packed into John Marrs’ brilliant psychological thriller that I’m not sure how to articulate my thoughts.

From the moment I began reading What Lies Between Us I was captivated by the claustrophobic and unsettling atmosphere created by the relationship between Nina and Maggie. Indeed, I found John Marrs entirely toyed with my mind as I vacillated between supporting the two women in turn, only to have my mind changed again in an instant, until I began to feel as controlled by the author as Maggie’s life is by Nina. This is such clever writing. Each of the women is pitiable, loathsome, duplicitous and endearing in various measure depending on the point in the narrative so that it wasn’t until the very last word that I decided whose side I was really on – and I’m not going to tell you for fear of giving anything away. The first person approach adds to the tension and appeal as both women’s voices are perfectly tuned so that it is as if they are speaking directly to the reader, making them complicit in the action.

The story line is fabulous. Short chapters add dynamism and excitement and there are so many plausible cliffhangers, hooks and twists that I found reading What Lies Between Us completely addictive. I felt as if I couldn’t leave Maggie and Nina alone in case they did something without me. I must have exclaimed ‘Oo,’ aloud at least a dozen times as I was wrong footed yet again by John Marrs’ skilful plotting.

Because the setting is confined for the most part to the house, the unnerving and claustrophobic atmosphere is enhanced, so that What Lies Between Us draws in the reader until they feel as if they are watching the action rather than reading about it. I loved the title because as well as the duplicity in the narrative, so much history and shared experience lies between Nina and Maggie. In addition, there’s a fascinating exploration of what lies between them individually and the reality of their lives and memories, providing several interpretations that are spellbinding for the reader. Self deception, delusion and manipulation are just some of the issues explored in this gripping read. Love and trust are equally sinister and made me question how we construct and adjust our truths until we lose sight of reality. This aspect made What Lies Between Us a surprisingly thought-provoking as well as enormously entertaining narrative.

I loved What Lies Between Us. It’s creepy, disturbing, occasionally violent and brilliantly written. John Marrs held me entranced and I had no choice but to devour this read. It’s superb and I can’t recommend it highly enough.

John Marrs is an author and former journalist based in London and Northamptonshire. After spending his career interviewing celebrities from the worlds of television, film and music for numerous national newspapers and magazines, he is now a full-time author. His science fiction novel The One has been adapted into a 10-episode drama series for Netflix by Misfits creator Howard Overman, and is currently being filmed. What Lies Between Us is John’s seventh book.

4 thoughts on “What Lies Between Us by John Marrs”