My enormous thanks to Holly Duhig at Exisle Publishing for sending me a copy of children’s book Tabitha and the Raincloud by Devon Sillett and Melissa Johns in return for an honest review.

Tabitha and the Raincloud by Devon Sillett and Melissa Johns is out in the UK on 10th March 2020 and is available for purchase in all the usual places including directly from the publisher here where you’ll also find teacher notes to accompany the book.

Tabitha and the Raincloud 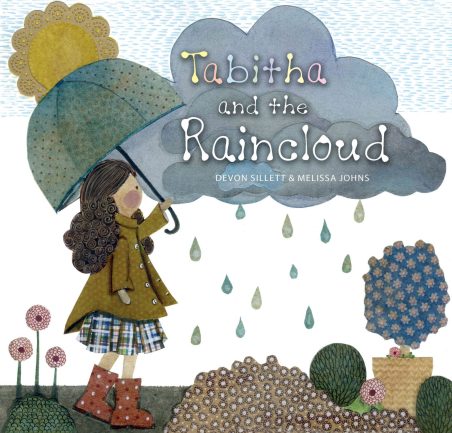 When Tabitha wakes up on the wrong side of the bed, she finds a big raincloud next to her. She tells it to go away, but it won’t budge. At school, she tries to draw a giraffe, but the raincloud distracts her and her art teacher compliments her on her dinosaur! By lunchtime Tabitha is so stormy none of her friends want to sit next to her. Tabitha realises she needs to change her attitude.

An empowering story of resilience and the importance of optimism.

My Review of Tabitha and the Raincloud

Tabitha wakes up in a bad mood.

Tabitha and the Raincloud is a beautifully presented children’s story. The quality of the book is impressive. It has a strong and robust cover that will survive many readings and much handling. The illustrations are engaging and appropriate with a calming and muted palette that suits the story perfectly. They also have a charm and simple style that children can easily relate to. Indeed, I can envisage children emulating the artwork and attempting the painting of a giraffe like Tabitha’s at the end of the story so that if Tabitha and the Raincloud were used in a school setting it could link with art or nature projects too.

The language in the story is accessible so that stronger independent readers could enjoy the story alone, but I think that Tabitha and the Raincloud would work best when read with a child by a parent, or with a class by a teacher, because it because it affords all manner of opportunities for discussion and exploration of emotional intelligence. There’s the consideration of other people’s feelings when Tabitha rejects her breakfast or when her behaviour leaves her isolated from her friends. There’s the way in which negative experiences can be turned into positive ones. There’s the concept of sharing with others. More subtle aspects such as exercise and action to ward off poor moods and unhappiness are also implied so that there really is a great deal to find and consider at the same time as entertaining children.

Tabitha and the Raincloud would make a super addition to any child’s reading. It really does show that every cloud has a silver lining!

Devon Sillett is a former radio producer, turned writer and reviewer. Born in the US, Devon now calls Australia home. She has loved books as long as she can remember — so much so that she even married her husband Matthew in a library! Currently, she is researching Australian’s children’s picture books for her PhD at the University of Canberra. She is the author of The Leaky Story, Scaredy Book and Saying Goodbye to Barkley (EK Books).

Melissa Johns is an artist, illustrator, an avid upcycler and a closet poet. She produces artworks predominantly made of recycled materials that lend her work a uniquely whimsical quality. Melissa is passionate about her family, her artistic creations and stimulating young minds through art and literature.